The ship’s horn sounds once as the MV Puyallup pulls away from the dock. Dozens of vehicles line the decks below, while hundreds of people settle into the booths and tables on the passenger decks of the 450ft Seattle ferry. The smell of diesel fuel briefly wafts through the cabin.

The commute from Bainbridge Island to Seattle only takes 35 minutes on the Jumbo Mark II vessel, one of the largest Washington ferries. But during that time, the ship will burn approximately 250 gallons of diesel fuel, and as much as 5,000 gallons for the 10 round-trip passages it sails daily. That’s all about to change. The Washington ferries are preparing to switch from diesel to battery power — becoming the world’s largest hybrid-powered, car-carrying ferries.

The maritime transport industry is notoriously dirty. About 70% of its emissions occur within 250 miles of land, exposing coastal cities, like Seattle, to health dangers associated with pollutants.

Matt von Ruden, the Director of Vessel Engineering and Maintenance for Washington State Ferries, says the timing couldn’t be better. The fleet is due for a regular equipment overhaul anyway. Why not take the opportunity to upgrade to a more environmentally-friendly design? Prompted by Governor Inslee’s executive order that launched Washington Maritime Blue, a sustainable maritime initiative, von Ruden began drafting the plan.

The first goal is to convert the state’s three largest Washington ferries, which carry as many as 2,499 people and 202 vehicles, from diesel-only to hybrid diesel-electric. Each Jumbo Mark II has four engines, totaling 16,000 horsepower. These “gas-guzzlers” drive generators, which keep the batteries topped up. By 2050, two of those engines will be gone, and in their place will be a large bank of lithium batteries — transforming North America’s largest ferry system to an eco-conscious ride.

Von Ruden says reconfiguring the docking terminal to rapidly recharge the batteries while passengers depart and board will be the biggest challenge. Washington ferries don’t dock in a typical fashion, alongside a dock (like parallel parking by a curb). Instead, they nose into a docking station with either end of the boat. That is where they will tap into the state’s power grid.

Von Ruden is assessing each ferry route, the current technology, and the needs at each terminal — looking for energy sources that would make significant reductions in total emissions.

“If (the power source) were a dirty coal plant, you’re not really doing much. Fortunately, in the Pacific Northwest, many of our utilities are sourced with renewable energy, primarily hydro-electric energy,” he says, adding that he is motivated by his two children to strive for sustainable alternatives. “This is a real opportunity to make an impact.”

The Washington ferries will be the world’s largest hybrid-powered, car-carrying ferries.

The maritime transport industry is notoriously dirty. About 70% of its emissions occur within 250 miles of land, exposing coastal cities, like Seattle, to health dangers associated with pollutants. And mitigating climate change will require tackling emissions across the transport sector.

Ferries are more ideal for this transformation than cargo ships because they have a predictable schedule, short routes, and repeatedly dock at the same place — making energy consumption consistent and offering a secure place to recharge again and again.

As electric cars have been growing in popularity for the past decade, converting the ships that carry them is a logical next step. In addition to transforming their three largest Washington ferries, the state will build five new, smaller hybrid ferries — rounding out the largest fleet of hydro-powered car ferries. 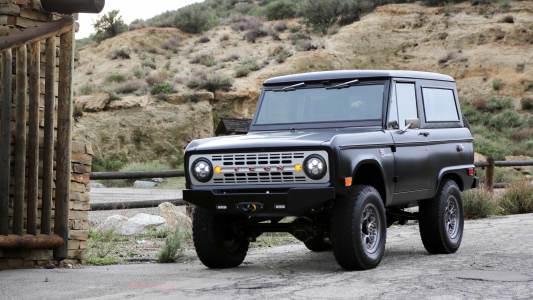 This boutique auto shop is crafting quality, custom cars that combine vintage designs with the latest technologies. And perhaps more importantly, they’re challenging the widely accepted concept that we live in a disposable world.

Cars
Back to the future: Classic cars go high tech7:18
Subscribe to Freethink for more great stories
Subscription Center
Challenges
Video
Freethink
Subscribe
We focus on solutions: the smartest people, the biggest ideas, and the most ground breaking technology shaping our future.
Subscribe