What’s more, the bacteria has another talent: it can make a by-product that helps extract copper. This means the microorganism could help prevent mining waste in the first place.

Living on the edge: Chilean biotechnologist Nadac Reales works with creatures that can survive in extreme conditions, called extremophiles. They thrive in exceptionally hot or cold environments, acidic habitats, or areas with high chemical concentrations.

Metal-eating microbes fit that profile because, well, they eat metal, so they naturally thrive in environments with a high chemical concentration.

Reale extracted the bacterium, called Leptospirillum, from the Tatio geysers in the Andes mountains — a highly acidic environment, reports Newsweek.

At first, it took the bacteria a few months to chew through a nail — which isn’t very practical for real-world applications.

So, Reales tried speeding up the process.

She did this by starving the bacteria — which essentially trained them to scarf down as many nutrients as possible when food was available. The faster eaters survived and reproduced. Then, as each generation of bacteria was starved, they evolved to eat faster. Eventually, after a few years and many generations, the bacteria could scarf down a nail in just a few days. Reales thought this could be a viable solution for the problem of mining waste in Chile.

“I realized there were various needs in the mining industry, for example what happened with the metallic waste,” Reales told AFP.

The need for green mining: Extracting minerals from nature frequently causes imbalances, which have a negative impact on the ecosystem. Mining has the potential to damage the air and water supply, destroy animals and their habitat, and permanently alter natural landscapes. Sinkholes, erosion, polluted waterways, and deforestation are all possible consequences.

The liquid by-products that microbes produce when they devour metal can be put to work extracting copper using a method known as hydrometallurgy.

There are different types of mining pollution, depending on the kind of operation, such as open-pit mining, brine mining, or underground mining. But none of them are free from environmental consequences. The smelting process (applying heat to extract metal from ore) can result in giant chunks of metal, reports Popular Mechanics. This is where Reale’s approach could prove successful. When Reales was researching microbes to extract copper, she realized that the tiny bacteria might be used to clean up mining waste, which is a significant source of pollution in Chile  — it’s the world’s top copper producer and the world’s second-largest lithium producer. Throughout history, mining has been an important industry in Chile — generating 200,000 jobs and accounting for 12% of Chile’s GDP last year.

Additionally, the liquid by-products that microbes produce when they devour metal can be put to work extracting copper using a method known as hydrometallurgy. Typically mining can release metal particles into the air, the blasts and tunneling can weaken the ground, and mercury and other contaminants can leech into the water table. Using hydrometallurgy to extract copper could reduce these negative impacts. It would give the bacteria a dual role: cleaning up mining waste and playing an essential role in more environmentally friendly copper mining.

“We’ve always seen a lot of potential in this project that has already passed an important test in the laboratory,” microbiologist and team member Drina Vejar told Newsweek. “It’s really necessary at this time when we have to plan for a more sustainable development, especially in all these cities with so many polluting industries.”

Eating a nail is only the beginning. Reale hopes that someday an army of these bacteria will really make a difference in cleaning up mining waste — consuming an entire hopper filled with ore.

Reale’s company, Rudanac Biotec, is working to exploit the bacteria’s unique talent and scale it up into a viable product for the mining industry. 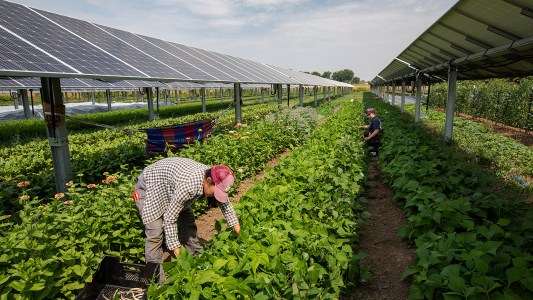