Underwater microphones used to listen for signs of nuclear bomb testing have captured the singing of a population of rare pygmy blue whales  — a major boon for researchers working to protect the animals.

Why it matters: Whales play an important role in the ocean ecosystem.

Their waste contains nutrients that increase the growth of phytoplankton and other tiny organisms. That has positive repercussions all the way up the food chain — it’s even been shown to increase fishery production.

When whales die, other creatures feed on their carcasses — and as the biggest animals in the world, they provide a lot of food.

The challenge: There were an estimated 350,000 blue whales in the world 150 years ago, but the animals have been hunted to near-extinction — today, despite the ban on whaling, only 25,000 or so remain.

To protect the animals, conservationists need to be able to keep track of them, but the animals are naturally reclusive, which makes finding them difficult.

“The largest animal in the world is one of the hardest ones to actually study,” Tracey Rogers, a marine ecologist at UNSW Sydney, said in a press release.

Rogers and her colleagues recently got lucky, though, as a new population of pygmy blue whales has given itself away — by singing.

The discovery: Certain species of whales are known to sing to and with one another, creating noises in predictable patterns to communicate information.

Not only do different whale species produce their own types of songs, specific populations within a species may sing differently, the same way people might speak the same language but with different dialects.

The UNSW team was given the opportunity to study a whale song picked up by the underwater microphones an international organization uses to monitor for the sounds of nuclear bomb testing.

If it isn’t a blue whale, it definitely sings like one.

Based on its structure, tempo, and other characteristics, they determined that the song was produced by pygmy blue whales — but not any of the four known populations in the area.

“I think it’s pretty cool that the same system that keeps the world safe from nuclear bombs allows us to find new whale populations, which long-term can help us study the health of the marine environment,” Rogers said.

The next steps: The researchers still need to visually confirm the existence of this new population of pygmy blue whales, and that might take a while — again, the animals are reclusive.

Still, the researchers are confident that what they’re hearing in the recording is a new population of blue pygmy whales.

“If it isn’t a blue whale, it definitely sings like one,” Emmanuelle Leroy, a UNSW bioacoustician, said. 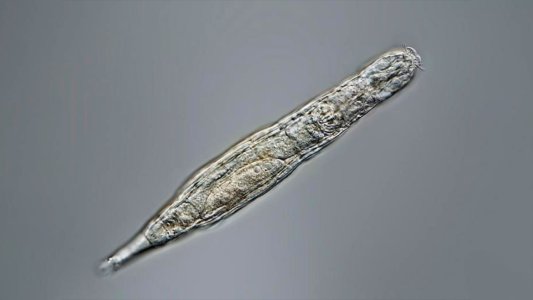 A multicellular animal called the bdelloid rotifer has used cryptobiosis to survive in the Siberian permafrost for at least 24,000 years.