The planet is heating up, so why not build a giant air conditioner?

Scientists are proposing extreme ideas to combat climate change. For one researcher, it means taking concepts used in new cooling systems, like air conditioners and refrigerators, to cool the whole planet.

Jeremy Munday, an engineer at the University of California Davis, is passionate about battling climate change. Just talking to him, you can sense his call of duty — to find ways that meet energy needs but at smaller cost to the planet.

Munday is covering all his bases. He is thinking of pie-in-the-sky solutions, without losing focus on developing smaller, practical tools. By looking into two applications of radiative cooling, Munday’s ideas could either generate clean energy — a practical, immediate use — or perhaps even cool off the entire planet.

What if, instead of just slowing the warming, we could actually help the Earth cool?

“It’s part of a broader scheme that people should think about — connecting back to figuring out ways to keep this planet habitable,” he says.

To understand Munday’s big ideas, first, you have to follow the basics of radiative cooling. The concept has been around for a long time. Before refrigeration existed, people harnessed the power of radiative cooling to make ice where temperatures never reach below freezing.

On chilly nights, Iranians would fill shallow stone pools with water. Because of the cold expanse of space hanging above the Earth, the soil, water, and just about everything else gives off heat. Sometimes, so much heat can radiate from the planet to space that water turns to ice, even if ambient temperatures are above freezing. Similarly, summer frosts happen because of radiative cooling.

Munday and his team used the concept of radiative cooling to design a panel that could make power at night (kind of like a reverse solar panel). By using the Earth as a heat source, the panel is warm compared to the night sky. Therefore, it will radiate heat out as infrared light. It generates electricity in the same way that solar panels do, by transferring heat, but in the opposite direction. Infrared light is emitted by the panel, and the current and voltage flow in the opposite direction as solar panels, but they still generate electricity.

Munday is currently building a prototype of the anti-solar cell in his lab. At a glance, it looks exactly like a solar panel. But rather than pointing it at the sun, he points it toward the night sky. Under ideal conditions, it could theoretically generate up to 50 watts of power per square meter. It isn’t much compared to a solar panel, which produces 150-200 watts per square meter. But Munday says the technology is still improving, and it is meant to supplement other forms of renewable energy, not replace them.

Munday is focused on scaling up the nighttime panel for electricity generation, hopefully securing another form of clean, renewable energy that could work when solar panels don’t. But that doesn’t stop him from thinking big. He says, theoretically, the concept of radiative cooling could be applied at a large scale to directly combat global warming — by cooling the planet.

Currently, the Earth is absorbing more heat than it is emitting — hence, global warming — and it is warming faster than anyone expected. Despite the climate movement, greenhouse emissions are going up instead of down, and a recent study in Science revealed that the oceans are heating up 40% faster than the UN estimated just five years ago.

But what if, instead of just slowing the warming, we could actually help the Earth cool?

Munday wondered what would happen if we deployed heat emitting material on a large scale. By radiating heat back to space, could we use the technology to actually cool down the Earth? In a paper published in Joule, Munday outlines how humans could use radiative cooling to reverse global warming.

He proposes that we increase the heat radiating off of the Earth to balance the heat trapped by greenhouse gases in the atmosphere. To do that, we would need to cover some of the Earth with materials that radiate heat — increasing heat flow away from Earth to stabilize, or even cool down, the Earth’s temperature. Munday says that with the latest thermally emissive materials, we would need to cover 1-2% of the Earth’s surface — that’s the size of about half the Sahara Desert. But he suggests that we break up that region into smaller plots across the globe and take advantage of rooftops and other sky-facing surfaces.

Yuan Yang, a materials scientist and engineer at Columbia, says, while it may seem large-scale, Munday’s idea is theoretically viable.

“If you make some paint and paint the roofing of all our buildings with that step-by-step, then that’s possible,” he says, adding that some companies are already trying to commercialize radiative cooling paint to help keep air conditioning costs down in hot climates.

It’s part of a broader scheme that people should think about — connecting back to figuring out ways to keep this planet habitable.

“It requires a large area, but I think radiative cooling is one way to reduce global warming. It will not be the sole matter that solves all problems. But it will reduce it,” he says.

Munday isn’t the only scientist considering dramatic measures to combat climate change. Geoengineering proponents have suggested spraying reflective aerosols into the atmosphere to cool the planet by reducing solar absorption — a controversial proposal, given that less sunlight could have other unintended effects besides cooling, such as reduced plant growth, and it’s not clear how to reverse it if we need to.

“With any of these technologies, you still are not getting at the core problem of continuing to use fossil fuels. So that’s one of the drawbacks,” Munday says, “you’re still not motivating a reduction in fossil fuel use.”

Munday says that unlike some large scale climate change solutions, deploying thermally emissive materials is harmless and can happen in small steps. The material is thin and looks like a cloudy version of Saran Wrap, made sturdier by being applied like paint to a rooftop or panel.

A range of technology that can cool the planet and replace the burning of fossil fuels (like Munday’s nighttime panels) are needed to really tackle the problem, he says. As researchers look for more climate change solutions, both big and small, maybe more will look to the night sky as a thermal heat sink — an abundant resource that we haven’t yet fully tapped into. 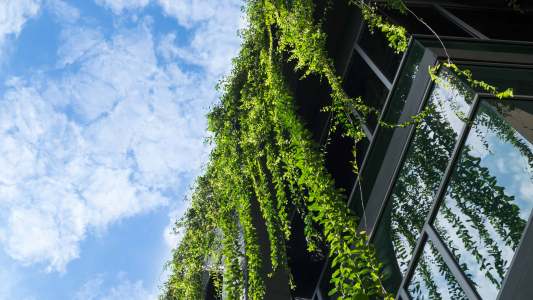 The building sector is one of the biggest contributors of greenhouse gas emissions. But new research suggests that trend could stop, and even reverse because of a new type of green building.