This story is not about the climate, as one might expect. While school bus electrification may cut greenhouse gas emissions, it can also help the children today.

The problem: 20 million children in the U.S. take the school bus each day. Nearly all of them ride on diesel buses — whose interior air pollution is up to 12 times higher than ambient levels.

Exposure to that pollution daily can lead to respiratory problems like asthma. It can also cause cognitive impairment, according to the World Resources Institute. What’s more, children who take the bus tend to be from lower-income families, worsening existing disparities in health and pollution exposure.

The solution: Replacing diesel with electric buses could help kids improve in school.

Fewer than 1% of school buses are electric currently.

Electric buses would go further, completely eliminating students’ daily exposure to diesel exhaust. Electric buses may even turn out to be cheaper than diesel. By some estimates, they could actually save school districts money over their lifetimes, through lower maintenance and fuel costs — not to mention the benefits to students’ health.

But making that initial transition will be difficult without help, because electric buses have high upfront costs. Recently, President Biden announced his support for a bipartisan infrastructure deal, one element of which would help school districts transition to electric school buses.

What’s taking so long? Fewer than 1% of school buses are electric currently. Only 1,164 electric school buses have been committed, which means they have been announced, acquired, delivered, or are in use, according to World Resources Institute.

But school bus electrification is increasing. At least 13 districts have ten or more electric buses. Nearly all of them are in California, which provides state funding for electric school buses.

But large fleets are coming to the east as well. This summer, Fairfax County Public Schools in Virginia announced that they would move toward school bus electrification by adding 10 more electric school buses to its fleet, after receiving a large $2.65 million state grant.

Another round of grants will provide more than $10 million to 19 Virginia school districts. Those funds will allow them to replace 83 diesel school buses with electric and propane-fueled vehicles (which are also much cleaner than diesel), reports Tysons Reporter.

Montgomery County Public Schools in Maryland has also announced intentions to purchase over 300 electric school buses over the next four years, aiming to become the largest electric school bus fleet in the U.S. The buses will run during the day and charge at night. And they hope to be 100% electrified in 14 years, reports WTOP news. 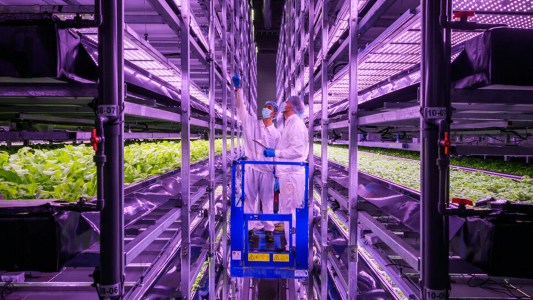 At a massive vertical farm in Denmark, food tech startup Nordic Harvest is demonstrating the benefits of moving agriculture indoors.