Despite standing 50 feet in the air, the crane’s platform felt even smaller than a bathroom stall. With my camera, harness, trash can filled with tools, and a cooler full of pollen, there was barely any room for the two of us to stand — plus, we were being squished into the branches of one of the last remaining American chestnut trees.

White paper lunch bags, which covered the flowers on the tree, made it look like it was growing marshmallows.

“Almost none of our landscapes are natural.”

Nothing about this seemed natural, as I rubbed genetically modified pollen onto one of the tree’s flowers. But Thomas Klak, an ecologist at the University of New England, told me, “We have a false idea of natural versus artificial.”

“We’ve been breeding and changing things for thousands of years. Almost none of our landscapes are natural.”

Indeed, the series of events that ultimately put Klak and me into this precarious position, balanced at the top of an endangered American chestnut in the Maine woods, began with  an ill-fated plan, over a century ago, to change the landscape by growing more chestnut trees.

An American nurseryman introduced the Japanese chestnut tree to the eastern U.S., accidentally introducing a blight fungus along with it. The fungus essentially wiped out the entire American chestnut population in the eastern woodlands, from Maine to Florida.

“Think about how profound and vast that inadvertent intervention was to destroy the keystone species of the eastern forest: 4 billion trees that nature, ecology, wildlife, and people relied so fundamentally on,” Klak told me. It was apparent that he loves the American chestnut.

Now, Klak’s mission is to restore the population to what it once was — with one exception. The future American chestnut forest will be made up of genetically modified trees.

Klak and I rubbed pollen onto the blooms of the chestnut tree, then placed paper bags over each flower to block pollen from nearby wild trees.

This particular American chestnut was hard to find — located along a single-lane dirt road near Cape Elizabeth, Maine. But Klak knows precisely where all the American chestnut trees are on this property, which oddly still has at least a handful of them.

That solitary gene could save the species.

Most of them are dying of fungal blight — the parasitic fungus that destroys the tree from the top down. It creates grotesque cankers, penetrated with poisonous chemicals, along the branches and trunk — choking off nutrients from the roots.

All American chestnuts infected with the fungal blight will die. The species would be extinct except for the fact that the blight can’t penetrate the soil. So, the roots remain, making the tree only “functionally extinct” — and giving Klak and the collaborating scientists a glimmer of hope for restoring the forest.

The chestnut is more important to Americans than they know. Considered the “redwood of the East,” it was once the most valuable tree east of the Mississippi. The massive trees can grow up to 100 feet tall and spread up to 75 feet. Klak says chestnuts make exceptionally great ice cream. But the nuts are also an important food for insects, animals, birds, and (ironically) fungus. Chestnut wood was used in houses and furniture, and Native Americans used the leaves for medicine.

This summer, after getting a permit from the federal government for a small experimental orchard, Klak and collaborators from the American Chestnut Foundation planted hundreds of transgenic American chestnut trees near the coast of Maine. If all goes well, the experiment could restore the majestic tree to its rightful place in the American forests.

The return of the forest king

In 2006, biologist William Powell, director of the American Chestnut Research & Restoration Program, transferred a single wheat gene into the cells of a blight-stricken tree. The simple gene is also found in strawberries and barley. It makes the plants more resistant to the fungus that causes blight.

“The safer way is the one that most people are more afraid of.”

But to get regulatory approval to introduce the tree into the wild, Powell had to convince the federal government that the transgenic tree is barely any different from the wild type, in every way imaginable. Its nuts are equally nutritious, the leaf debris is OK for tadpoles, the pollen won’t harm bees, the roots don’t harm the microbial community living in the soil.

“We look at all these things to make sure that what we really have is an American chestnut tree. And the only thing added to it is the ability to detoxify the acid that the fungus uses to attack,” he says, adding that, so far, everything checks out a-OK.

A campaign called STOP GE Trees, an arm of the Global Justice Equality Project, says transgenic trees “pose risks of contaminating forests, damaging ecosystems.” The campaign’s objective is to protect forest-dependent communities from “the unknown and irreversible risks of releasing genetically engineered (GE) trees.” They say that by stopping the spread of GE trees, they can protect native forests and biodiversity.

But Klak says that humans have had an overwhelming impact on the landscape and nature already.

“We shouldn’t fool ourselves to think that there’s something pure out there that we can try to protect. We’ve intervened, sometimes purposefully or accidentally as in the case of the chestnut,” he says. “The question is, how are we going to use our profound capacities as a force of good? Because there’s been too many times where we’ve done the opposite.”

Farmers and scientists used to modify plants’ DNA by interbreeding them, but doing so often resulted in hundreds of additional genes, variations, and unexpected modifications. Now, with new gene-editing techniques, they can focus on altering one single gene at a time. Powell says that modern techniques can preserve the integrity of the tree.

“We basically have everything upside down here. The safer way is the one that most people are more afraid of,” he says.

The future of the forest

L. LaReesa Wolfenbarger, Biology Department Chair at the University of Nebraska Omaha, says that Powell’s studies on how the tree impacts the ecosystem are critical, but the research project is an enormous task. There are endless variables — so many that no amount of research could cover them all.

“Even if we had perfect knowledge… evolution is always in the game.”

“Even if we had perfect knowledge, right now, of all the interactions, evolution is always in the game, and organisms evolve over time,” she says, adding that she doesn’t think that is reason enough to not plant the transgenic tree in the wild. But Wolfenbarger says we should tamper our expectations.

Klak is aware of the timescale. Even if his experimental orchards are as successful as he hopes, and the tree gets federal approval, it could be generations before the American chestnut is fully incorporated into the landscape again.

“No scientists working on this believe we’re going to be finished in our lifetimes,” he says.

“There is a saying that we often repeat, ‘Society, it grows great when old men plant trees they know they won’t sit in the shade of.’” 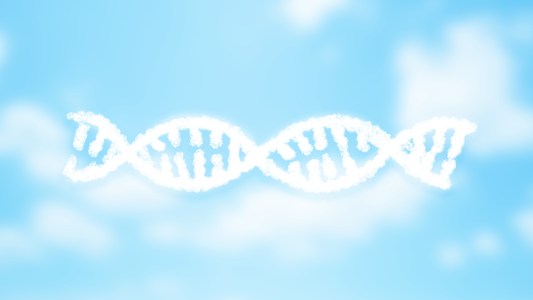 Researchers have proven that the atmosphere contains measurable amounts of eDNA, and they can vacuum it from the sky.

Biology
Scientists are vacuuming DNA from the air to study biodiversity
By Teresa Carey
Subscribe to Freethink for more great stories
Subscription Center
Sections
Video
Freethink
Subscribe
We focus on solutions: the smartest people, the biggest ideas, and the most ground breaking technology shaping our future.
Subscribe