The images are arresting, like arrows embedded in a leaden North Sea: a cluster of spinning turbines bobbing off-shore, harnessing the ocean wind, in a sight reminiscent of both Scandinavia and Star Wars.

That’s the vision of Norway’s World Wide Wind, which is seeking to create a radically different kind of wind turbine to optimize offshore wind farms.

Their design, known as a vertical-axis wind turbine (VAWT), features its heaviest components at the bottom, allowing them to move with the wind and sea. Two sets of blades will spin opposite of each other like a helicopter, New Atlas’ Loz Blain reported.

They should generate less atmospheric wake than a traditional turbine design, allowing more towers to be jammed into an area — and oh yeah, World Wide Wind imagines them huge.

Bigger is better: As in, 1,312 feet huge — over 500 feet taller than the world’s current largest wind turbine, the MingYang Smart Energy 16.0-242. Scale is everything for wind power, and where MingYang’s turbine currently has a 16 megawatt capacity, World Wide Wind’s envisioned mammoth VAWT would have a 40 megawatt capacity

It’s important to note this is still just a vision, though; the company plans to use rapid prototyping to get a small model running by 2026, with the beast debuting in 2029, Recharge reported.

“We feel this represents a game-changer in terms of less cost … but also lifetime maintenance, and size, because it’s much more stable than conventional turbines,” World Wide Wind CEO Trond Lutdal told Blain in an interview.

What is a VAWT? If you’ve ever seen really large wind turbines, that’s probably a HAWT — a horizontal-axis wind turbine.

VAWTs have a few key differences. True to their name, a VAWT’s axis is, well, vertical. Their blades spin around their tower like a maypole, as opposed to the HAWTs’ giant pinwheel vibe. This design gives them a few potential positives.

VAWTs reduce one of a traditional wind turbine’s key problems: they generate a lot of wake behind them.

The vertical axis wind turbines create less turbulent air, allowing them to be placed closer together, and are envisioned to eventually be over 1,000 feet tall.

This turbulent air they create impacts turbines behind them; if a first turbine has an efficiency of 50%, one standing in its wake could have that knocked down to 40%. To avoid this loss, a HAWT needs to be placed almost two miles away from the one in front of it, which means a truly substantial wind farm takes up a lot of space.

While vertical turbine efficiency lags HAWT’s by 10-15%, they can be placed much closer together, overcoming their individual shortcomings as a team, like an inspirational sports movie.

Balancing act: A HAWT has got all their heaviest components, the motors to turn with the wind and generators that generate electricity, at the top of their towers, making them complicated — and expensive — to build and to maintain. They’re also very poorly suited to offshore work, from a design perspective; imagine balancing all that on a float.

And, as World Wide Wind CTO Hans Bernhoff told Blain, building wind farms on land in Europe is politically difficult, plus the regular wind found out on the ocean makes it a more efficient place for gathering energy.

A VAWT design, with all of the heavy components at the bottom, is easier to build and work on — and thus cheaper — with the added bonus of being much more adaptable to the open sea. Research has also found that they work best at an offset angle, something accomplished by being moored to the ocean floor, and they can catch the wind from any direction.

World Wide Wind’s design looks to further augment their efficiency by putting two sets of counter-rotating blades on the tower.

“And then there’s the advantages of the counter-rotating concept,” Tron told Blain.

“One is that you’re neutralizing the torque on the structure; that’s important for floating, because otherwise there’ll be a twisting force toward the mooring system. So that’s important. Secondly, by merging two turbines into one, we’re doubling the size and the scale immediately.”

And scale is the key — wind energy needs to be made as cheaply and efficiently as possible to have the maximum impact.

Next steps: As you may expect for a radically divergent concept, there’s still major hurdles between renderings and real things.

The first prototype to test the counter-rotating was only 6’5”, Trond said, and the company is in the process of raising the money for the larger prototypes needed to eventually bring the design to scale.

“It’s known technology,” Trond said of the massive, over 1,000 ft tall behemoth. “The blades will be more than 150 m (492 ft), but there’s really nothing that’s science fiction when it comes to this. But obviously, it’s a big construction.”

In the meantime, they hope to spin-off smaller models based on their prototypes as a way to raise capital. 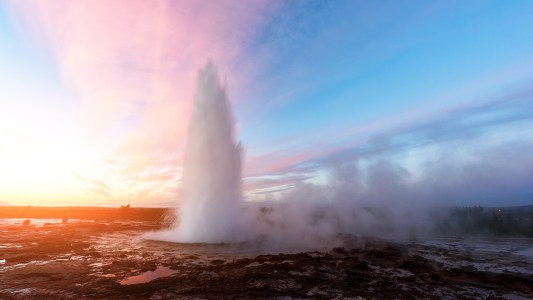