The supersonic commercial jet — once cast aside as too costly and impractical — is on the verge of making a comeback, thanks to recent technological advances.

A supersonic flight could carry you from New York to London in just 3.5 hours — a trip that currently takes about 7 hours on today’s commercial jets — or from L.A. to Sydney in just under 7 hours, instead of 15 hours.

We saw our first commercial supersonic jet take off over 40 years ago, but the technology never went mainstream. Since then, commercial flight times have actually stagnated (and even regressed). Three supersonic startups — Boom Supersonic, Spike Aerospace, and Aerion Supersonic — are looking to reverse the trend in the 2020s.

Overture could gain approval to carry passengers by 2029.

Boom is leading the charge. Last week, the Colorado startup unveiled its new supersonic jet, called XB-1. While this jet won’t take off until next year and won’t carry any passengers, Boom says it’s the stepping stone to their dream goal: “Overture,” a jet that will carry up to 88 passengers and fly at twice the speed of today’s commercial airliners. Tickets will reportedly set you back about $5,000 (but, as with any new technology, those prices are likely to fall over time).

In 1976, the Concorde became the world’s first supersonic commercial jet. For the next 30 years, passengers enjoyed the fastest flight times in the world. In 1996 the Concorde set a record flight time of just two hours and 53 minutes from New York to London.

However, the Concorde had some serious design flaws that destined it for failure.

One, sonic booms. Preempting public complaints, the FAA banned supersonic flights over land, which meant supersonic speeds were only allowed on transoceanic flights. This dramatically restricted the Concorde’s market potential. (For the past couple of years, lawmakers have flirted with the idea of replacing this speed limit with a noise limit.)

The limited routes (as well as other design flaws, like gas-guzzling engines and excessive weight) caused ticket prices to skyrocket to $15,000 a pop.

By 2003, the Concorde flew its last route without ever having turned a profit. Since then, supersonic air travel has been relegated to military-use only.

Thanks to advances in technology and creative engineering, Boom is on track to overcome the Concorde’s failures.

The XB-1 is made out of carbon fiber, making it lighter and faster than the Concorde, which was made out of aluminum. It will also use a more modern engine (the J85-15) that is better at fuel efficiency, allowing Boom to save on gas and fly longer routes. Boom is also testing new technologies that can muffle the sonic boom.

One cool design feature is the pointy nose. A supersonic jet has to accomplish two very different tasks: be nimble at slow speeds, for take-off and landings, while also being lightning fast in the skies. To help address both needs, the Concorde had a large, heavy nose that would tilt down so that pilots could see the runway — and it would raise up once in the air to help with speed. The XB-1 has the same nose but it will stay in place. Cameras fixed to the bottom of the plane allow the pilot to see the runway and software will help guide the plane.

Show me the money

The real trick is making sure Overture stays low-cost enough to make it a realistic alternative to the planes we have today. Boom has estimated that Overture will cost around $200 million, placing it right in the middle of what Boeing pays for its aircrafts. The kicker, however, is that most current commercial jets can fit about four times the number of passengers that Overture can. Will this translate into ticket prices only a handful of passengers will be able to afford?

The XB-1 will complete ground testing before heading to California for flight tests in 2021. Boom says Overture, the passenger jet version, will begin test flights in 2026, before gaining approval to carry passengers by 2029 — at the earliest. 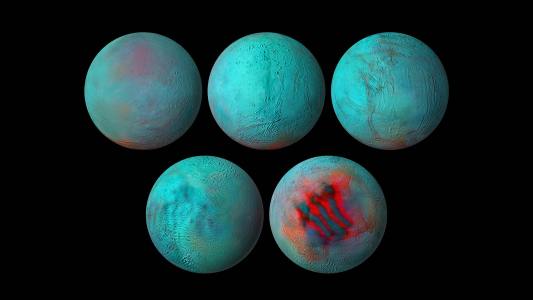 Saturn’s moon Enceladus is already suspected of hosting extraterrestrial life, and new Cassini data suggests where that life might exist.