In 2017, NASA’s Cassini spacecraft intentionally plunged into Saturn’s atmosphere, ending a 13-year-long exploration of the planet and its moons.

One of those moons, Enceladus, is on scientists’ shortlist of places in our solar system that might host life — and now, a new analysis of Cassini data has yielded a clue about where that life might be, if it exists.

For the first 200 years after Enceladus’ discovery in 1789, scientists thought it was just another ball of solid ice. The only truly remarkable thing about the moon was its brightness — it’s the most reflective body in our solar system.

When the Voyager spacecraft flew by Enceladus in the 1980s, scientists learned that the ice covering the moon’s surface was relatively free of crater impacts — very odd, given that most of Saturn’s icy moons were covered in them.

The plumes indicated the existence of a liquid ocean beneath the ice of Enceladus.

There wasn’t any reason to suspect that the moon had somehow dodged the space rocks — most likely, fresh ice was filling in the craters, smoothing out the moon’s surface.

It wasn’t until Cassini reached Enceladus that scientists learned that plumes of ice and water vapor were shooting out of the icy crust near the moon’s south pole. Some of these particles would later fall back to its surface, like space snow, forming the fresh ice that filled the craters.

These plumes indicated the existence of a liquid ocean beneath Enceladus’ ice, landing the moon on scientists’ radar as a potential home to extraterrestrial life.

That potential for life increased when Cassini later delivered evidence that the water in the plumes was coming from openings in the floor of the moon’s ocean known as “hydrothermal vents.”

Scientists had never spotted these geological features anywhere in the solar system but Earth — and on this planet, the area around them is bustling with life.

“A lot of origin-of-life scientists believe that this is the place where life could have started on Earth,” NASA research scientist Morgan Cable said in 2017. “So that gets us very excited about finding a place where conditions might not only allow for life to exist, but conditions that might allow for an origin of life as well.”

Now, using data collected by two instruments aboard Cassini, scientists have constructed the most detailed infrared images of Enceladus ever created.

Not only do these images provide a clear look at the fresh ice near the moon’s south pole, they also suggest that Enceladus’ northern hemisphere has fresh ice, too — indicating that it might have recently been home to some kind of life-supporting geological activity, too.

“The infrared shows us that the surface of the south pole is young, which is not a surprise because we knew about the jets that blast icy material there,” Gabriel Tobie, co-author of the new study, published in the journal Icarus, said in a news release.

“Now, thanks to these infrared eyes, you can go back in time and say that one large region in the northern hemisphere appears also young and was probably active not that long ago, in geologic timelines,” he continued. 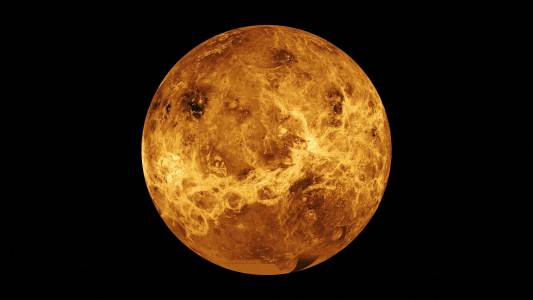 Scientists found the gas, phosphine, in Venus’ atmosphere. So far, the only explanation is alien life.

Astronomy
Signs of life found on Venus
By Teresa Carey
Subscribe to Freethink for more great stories
Subscription Center
Sections
Video
Freethink
Subscribe
We focus on solutions: the smartest people, the biggest ideas, and the most ground breaking technology shaping our future.
Subscribe