Everybody fails; accidentally, on purpose, through no fault of their own, because a butterfly flapped its wings on pangea. But not everybody responds to failure the same way. Some of us are scarred by it, while others seem strangely improved. Some of us escape failure with our reputations intact, while others are branded as losers.

In The Up Side of Down: Why Failing Well Is the Key to Success , Bloomberg columnist Megan McArdle weaves together reporting from the fields of psychology, policy, and business to explain how we’ve made failing worse than it has to be, and how we can learn to minimize the downside of failure in order to live more interesting lives. McArdle recently spoke with Freethink about her book, and why learning to suck at something is the only way to get good at it.

Mike Riggs: Your book makes a compelling case that failure is inevitable and that we should be more amenable to failing, at an individual level and a social one. I think most people would readily accept the first claim. Can you ease us into the second one?

Megan McArdle: If there’s no world where we don’t fail, what we should try to do is be smarter about how we bounce back from failing.

For example, I’m a highly, highly, highly neurotic person. I internalize everything. I blame myself for every trivial mistake. I’ve always been this way, I will probably die this way. Yet I managed to get through some fairly traumatic unemployment for a couple of years after business school, came back, and found something else to do. Other people can do this.

How? You have to understand that failure is normal and you have to give yourself permission to suck. 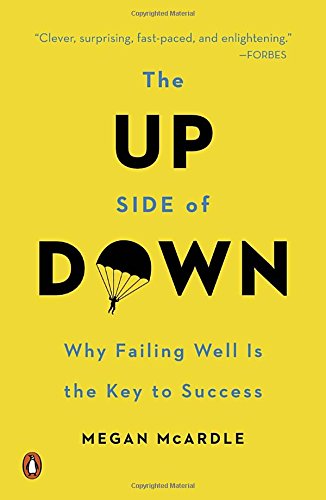 Mike: You use the writing profession as an example of this.

Megan: You have to accept that being bad is part of learning to write. Most people who end up approaching professional writer status were always better at it than other kids. Then they get into the professional landscape and realize everyone else in the industry was also better at it than the other kids. This can be very traumatic for a lot of writers, and I’ve seen some of them just freeze. They don’t turn stuff in because as long as they haven’t turned it in, it’s not bad yet.

How do you hack that thinking? You say to yourself, “Look, I can rewrite garbage, I can’t rewrite nothing.”

Mike: It’s the iteration paradox. You miss 100% of the shots you don’t take, but you also miss a ton of the shots you do take when you’re first starting out. You have to do a thing over and over to get good at it, while somehow dealing with the fact that it’s really embarrassing and discomfiting to try hard at something and still be bad.

Megan: And the only way around that is to accept that failure is an essential part of the process.

You are not supposed to sit down and be Proust on your first pass. Proust wasn’t even Proust on the first pass.

You are not supposed to sit down and be Proust on your first pass. Proust wasn’t even Proust on the first pass. That means you have to see doing something badly as better than not doing anything at all. I won’t get fired for handing in 1,000 bad words. I will definitely get fired for not handing in anything.

After that, the next step is learning to recognize where and why you’re bad without rolling around on the floor, saying, “This is terrible, I’m obviously the world’s worst writer.” And you do that by looking at your bad work as a dipstick that measures where you can improve rather than one that measures your innate talents.

Mike: This speaks to the idea that learning how to do something new is good for you even if it doesn’t necessarily turn into a career.

Megan: We learn by doing stuff not well. That’s how people learn to play tennis. You don’t become good at it by creating a really elaborate theory of tennis ball physics, or else MIT would win Wimbledon every year. You hit a ball, you try to guess where it will go. It doesn’t go where you expect and then on the 100th time you finally hit it right. By hitting it wrong all those times, you learn to hit it right.

If you’ve never done anything you weren’t good at, you can’t learn the valuable skill of sucking at something but continuing to do it, which is how people get good at anything.

If you’ve never done anything you weren’t good at, you can’t learn the valuable skill of sucking at something but continuing to do it, which is how people get good at anything. And we have to make ourselves do it because doing something you aren’t good at is usually less rewarding than things that come more easily.

Mike Riggs: Expanding beyond your comfort zone also seems important because the first thing you realize you’re good at might not be the only thing you’re capable of being good at, and we should all want to be good at more than one thing. That feels particularly true after I read the sections on “path dependency,” which exists at both a personal level and an institutional one. Can you talk a little bit about the dangers of letting what you’ve been good at in the past determine what you focus on in the future?

Megan McArdle: The idea of path dependency at its simplest level is, “If I drop a jar of mustard on the floor, I can’t put the jar of mustard back together.”

Choices you made in the past constrain your options going forward.

Choices you made in the past constrain your options going forward.

You see this in policy all the time. Obamacare is a good example. Republicans have promised to repeal Obamacare, but we can’t just go back to 2010. Things have changed. The whole market has now been optimized for Obamacare, and you’re going to leave big holes in the market and a lot of people without coverage if you just repeal it.

You see this with companies too. Eastman-Kodak was incredible at making film. They had some challenges when the Japanese entered the market in the 70’s, but overall this was a phenomenally successful company. My mother happens to be from about 45 minutes outside of Rochester, and remembers Kodak Bonus Day as a day of celebration for the whole city. Literally, people took the day off. It was a holiday.

Then digital happened, and Kodak tried to keep up. But they built the company over 100 years, and they optimized it for film. The managers were not digital experts. If you were going to start another company now to do digital, you certainly wouldn’t just hire all the Kodak managers, and you wouldn’t hire all the people who worked under the Kodak managers. You would hire people who are good at the new thing you need done.

Things change, and sometimes even really successful companies can’t change with them because choices that made sense 50 years ago have hobbled them in the present.

Mike Riggs: It seems like the best way to hedge against that kind of collapse at the institutional level is to be as diversified as possible at a personal level. Try things that are difficult, save as much as you can, contribute to a 401k. But even that is hard for lots of people.

Megan McArdle: The fact is you can’t assume nothing bad will happen. You could get hit by a truck tomorrow. Your company could go under. We should prepare for failure, which is why I always tell my readers to save 20% of their gross income. As you can imagine, this is not a popular suggestion with my readers.

There’s no such thing as a golden ticket. You always have to have a plan B.

I also advise people to have a year’s worth of expenses in an emergency fund. This was viewed, even by financial advisors, as quite conservative. But I spent two years being unemployed after getting what was supposed to be the golden ticket to a guaranteed job, which was an MBA from a top-five school. And that taught me there’s no such thing as a golden ticket. You always have to have a plan B. You always have to be thinking about what you’ll do if your company fails. Where will you go next? You should be maintaining connections in that industry, but you should also be living below your means. You should have a smaller mortgage than what you can afford. You should have more savings than you really need.

Mike Riggs: This just goes back to the idea that if uncertainty terrifies you and the idea of failing makes you nervous, then you should structure your life, as much as you can, so that if it happens it doesn’t destroy you.

Right, but this doesn’t just protect you from unforeseen events, it also enables you to minimize the downside of taking risks that you want to take. If you have fewer recurring expenses, diversified savings, and a willingness to develop new skills, you can afford to fail without everything going to hell.

If you accept that failing is likely, and then do as much as you can to protect against failure ruining your life, you can take the kinds of risks that make life worth living.

I’m not saying everyone needs to run out and be an entrepreneur. You can take risks within your career. You can move to a company you might not have thought of because it’s not familiar and comfortable, but you want to try it because there’s potential for you to do something great. You could decide to work fewer hours and spend more time doing something you’re passionate about.

If you accept that failing is likely, and then do as much as you can to protect against failure ruining your life, you can take the kinds of risks that make life worth living.

Failing
3 times our brightest minds made bad predictions
Some of the predictions might look outlandish now, but at the time they actually seemed quite plausible.
Up Next
No related content in the preview
Subscribe to Freethink for more great stories
Subscription Center
Sections
Video
Freethink
Subscribe
We focus on solutions: the smartest people, the biggest ideas, and the most ground breaking technology shaping our future.
Subscribe