Renewable energy is better for the environment, but, other than hydroelectric, it isn’t on-demand. We can’t turn the wind on when we need it as easily as we can start a diesel generator.

As businesses, cities, and even countries make promises to get to net-zero emissions, innovators are exploring the most efficient ways to store extra energy so it is ready when the wind and sun aren’t enough to meet demand.

Flow batteries are a type of liquid battery that has the potential for large-scale, long-term energy storage. But, so far, the materials to make them are too rare and too expensive. But researchers have found an alternative — and the material looks a lot like molasses.

“The transition to clean energy requires energy storage systems of different durations for when the sun isn’t shining and the wind isn’t blowing. Our work demonstrates that a semi-solid flow battery could be a lifesaving as well as economical option.”

The challenge: When it comes to flow batteries, size matters. They store chemical energy in tanks of liquid, and the larger the tank,the more energy they can hold.

Unfortunately, Anthropocene reports, most flow batteries rely on vanadium, which is an expensive mining by-product.

The good stuff: A team at MIT, led by mechanical engineer Yang Shao-Horn, tried out a variety of electrically conductive materials to replace vanadium in the liquid, before honing in on manganese dioxide, they reported in the journal Joule.

Their concoction resulted in a syrupy, semi-solid material that resembles molasses. According to the team, the new electrode material could bring down the cost of current state-of-the-art vanadium-based flow batteries without losing performance.

“We performed a comprehensive, bottom-up analysis to understand how the battery’s composition affects performance and cost, looking at all the trade-offs,” Thaneer Malai Narayanan, a researcher on the team, said in a statement. “We showed that our system can be cheaper than others and can be scaled up.”

According to the study, the semi-solid flow battery outperforms lithium-ion and vanadium redox flow batteries when discharged for more than 24 hours. Plus, the vanadium batteries rely on expensive materials that make them less cost-effective.

Future plans: “The next step is to take our battery system and build it up,” added Narayanan. “Our research also points the way to other chemistries that could be developed under the semi-solid flow battery platform, so we could be seeing this kind of technology used for energy storage in our lifetimes.”

The team says that their battery slurry could help solve some of the energy storage challenges facing grids that rely on renewable, intermittent sources of power.

“The transition to clean energy requires energy storage systems of different durations for when the sun isn’t shining and the wind isn’t blowing,” said Emre Gençer, a research scientist with the MIT Energy Initiative (MITEI) and a member of the team. “Our work demonstrates that a semi-solid flow battery could be a lifesaving as well as economical option when these VRE [ variable renewable energy] sources can’t generate power for a day or longer — in the case of natural disasters, for instance.” 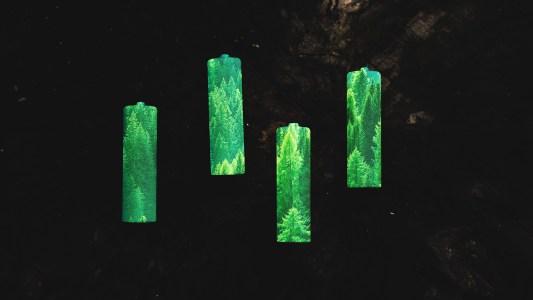 To improve battery life and safety, while maintaining ionic conductivity, researchers aim to replace the liquids commonly used in batteries with a solid material made from trees.

Climate Crisis
Batteries of the future could be made from trees
Subscribe to Freethink for more great stories
Subscription Center
Challenges
Video
Freethink
Subscribe
We focus on solutions: the smartest people, the biggest ideas, and the most ground breaking technology shaping our future.
Subscribe