Ford has unveiled its first electric truck, a pickup that could help accelerate the transition to electric vehicles (EVs) in the U.S.

“For both Ford and the American auto industry, F-150 Lightning represents a defining moment as we progress toward a zero-emissions, digitally connected future,” Bill Ford, executive chair of Ford Motor Company, said in a press release.

Why it matters: Passenger vehicles are a major source of climate-harming emissions, so swapping out gas-powered vehicles for EVs is an important way of addressing climate change.

However, despite pickups accounting for about 20% of vehicle sales in the U.S., automakers have largely ignored them in the transition to EVs, because power is a bigger consideration for most truck owners than fuel costs or environmental benefits.

Set up for success: The Lightning could be the truck to electrify that untapped market.

It has a starting price below $40,000, and tax credits could save buyers more than $12,000. That means the electric truck is financially comparable to similar gas-powered pickups.

Ford’s F-series has also been the best-selling truck in the U.S. for more than 40 years, so the Lightning comes with name recognition that other electric pickups, such as the Rivian R1T, lack.

“(The Lightning is) huge for Ford, but also huge for the whole industry,” Michael Ramsey, a Gartner analyst, told the New York Times. “If you’re going to electrify the whole vehicle fleet in the United States, the F-150 going electric is a big step in that direction.”

The specs: Ford’s electric truck looks a lot like previous models in the F-150 series and performs like them as well, having undergone the same durability testing as its predecessors.

The vehicle has two battery options, with an estimated range of 230 miles for the standard battery and 300 miles for the extended battery. At a 150kW fast-charging station, the former can go from 15% to 80% power in 44 minutes, with the latter doing the same in 41 minutes.

Ford is also giving Lightning buyers an 80-amp charging station for their homes — with that, they’ll be able to charge the 300-mile battery from 15% to 100% overnight, or about eight hours.

There’s a lot at stake here, not just for Ford, but really for the country.

A mobile power station: The truck’s battery can do more than just keep it moving on the road, too — the Lightning has built-in outlets that owners can use to power other devices on the go.

On the worksite? Plug in a drill. Tailgating? Connect a crock pot.

The electric truck can even provide power to a house if the electricity goes out. According to Ford, the extended battery has enough juice to support the average home for three days.

“F-150 Lightning is built for seamless transitions between charging your vehicle and powering your house when needed,” Ryan O’Gorman, Ford’s EV manager of strategic partnerships, said. “Ford is the first in the U.S. to offer this capability on an electric truck.”

The next steps: Ford is now accepting reservations for its electric pickup truck, with plans to begin delivering the vehicles — and potentially change the EV game — in the spring of 2022.

“There’s a lot at stake here, not just for Ford, but really for the country,” Darren Palmer, Ford’s head of battery EVs, told NPR. “This could be the point when people really notice electric (vehicles).” 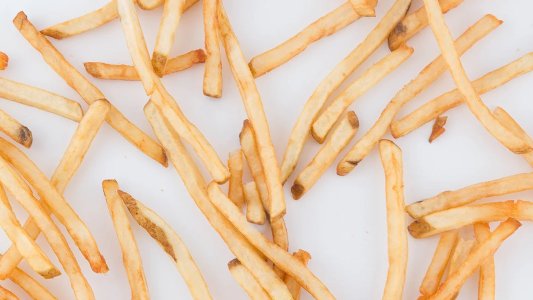 Startup Farther Farms has developed a pasteurization process that allowed it to create shelf-stable French fries that last 90 days at room temperature.