One of the largest producers of carbon dioxide emissions is the electricity industry, accounting for 25% of all US emissions. We are building everything from nuclear power plants to giant solar and wind farms to solve this.

But the US has an untapped clean energy source, hidden deep in old abandoned oil wells. Down in their deserted depths, the heat is enough to flash water to steam and provide us with copious amounts of clean geothermal electricity.

But why has this incredible energy source been left alone? And could it make a difference in our fight against climate change?

Power beneath in our feet

Before we dive into converting oil wells to geothermal power plants, let’s first recap what geothermal power is. There are several different types, but they all work in roughly the same way. You start by drilling down to depths where the temperature of the rocks is around 300°C/572°F (or higher), thanks to the searing temperatures of the Earth’s core and mantle.

You inject water down there, where it flash boils to steam. The rapid expansion of the steam forces it back to the surface with immense power. Simply channel this high-pressure steam through a turbine, and you have electricity!

Geothermal energy has some astonishing advantages. First, it is carbon neutral, or at least very low carbon depending on how you operate it. But unlike solar or wind, it is available on-demand. This means that you don’t need mega-batteries to store energy for later.

Geothermal is also far more compact than solar or wind. To produce 1 gigawatt of power, a geothermal plant would need 404 square miles, but a solar farm would need to be 3,237 square miles! This means geothermal causes far less habitat disruption, allowing nature to thrive. It also takes far less carbon dioxide to build a geothermal power plant than it does to make an equivalent number of solar cells.

So why isn’t everywhere using geothermal? The problem is that not everywhere has these hot rocks near the surface. Iceland has the most accessible geothermal sites, but they still require boreholes of around 2,700 m deep! If you are willing to drill to around 20 km deep, you could get geothermal power everywhere.

But it costs an awful lot to go down that far, and the technology to go that deep is still in development, so we have opted for cheaper, more proven options like wind and nuclear.

This is where the US’s abandoned oil wells come in.

How much is down there?

The US currently has over 3 million abandoned oil and gas wells. Their supplies have run dry, and now they are just deep holes with no fossil fuels in sight. But their depths are hot — hot enough for geothermal power.

Drilling a deep borehole is one of the most significant costs of building a geothermal power plant. So, in theory, by repurposing these old oil wells, you can avoid this costly part and create incredibly cheap, quick-to-build, and scalable geothermal power stations.

So how much energy could you make by converting all 3 million abandoned wells? A small geothermal power plant like Krafla Power Station in Iceland can produce around 60 megawatts with 33 boreholes, approximately 1.8 megawatts of power from a single borehole.

If you imagine scaling that to 3 million boreholes, you’d estimate 5,500 gigawatts — nearly five times the amount of electricity generating capacity of the US in 2021!

Simple, right? Ditch all our gas, nuclear, and solar plants!

The US has over 3 million abandoned oil and gas wells at depths hot enough for geothermal power.

Well, sadly, not quite.

First, while the rocks in these wells are hot, they’re not Iceland, and most are not hot enough to create the powerful steam needed for these high-capacity geothermal plants. So while some of our abandoned wells could be turned into full-blown geothermal plants, the vast majority would be low-temperature, low-output facilities.

These less powerful sites will have to use heat exchanges or stirling engine generators to extract small amounts of energy from hot water (not supercritical steam) that rises from the well.

So we can’t extract thousands of gigawatts from these wells. But we can still pull a lot of power out. TGS is surveying sites to assess just how much energy we can extract, and it looks to be in the high megawatt, low gigawatt range.

A second obstacle is the issue of infrastructure. Most of these wells are far away from where power is needed. We could build all new power lines and distribution centers, but the immense distances it has to travel will incur significant losses.

Combined with the weak initial power of most of the wells, this means that even though it could be cheap to build these oil well geothermal plants, the cost per delivered kWh of electricity would be staggeringly high in many locations.

From hydrocarbons to green hydrogen

One potential way to repurpose low-power wells that aren’t good sites for geothermal electricity is to use them to create green hydrogen — hydrogen that doesn’t emit CO2 in its refining.

It doesn’t take much energy to produce green hydrogen, and, in principle, a constant trickle could create a worthwhile amount of energy. (By way of illustration, more than half of active oil wells in the US produce just 0-4 barrels of oil per day, which is enough to make them economically viable, even though they only pump for a few minutes a day.)

What’s more, there is already infrastructure around these to deliver gas and oil to distribution centers, meaning it should be easy to do the same for hydrogen. This fuel can then be used in hydrogen fuel cell planes, cars, and boats for zero-emissions transport. Green hydrogen is set to become a vast multi-billion dollar industry over the coming decades. So it is possible that US geothermal hydrogen could become a player in powering the world with this revolutionary fuel.

This is why, despite the shortcomings, the US Department of Energy has given $8.4 million to four different projects aiming to demonstrate that oil wells can be converted into geothermal power stations. Over the next few years, we may see considerable interest in geothermal power in the US.

There is something poetic about this. Modern America was built on its immense oil fields. They made it wealthy, independent, and a global superpower. Yet as the world turns its back on oil and starts to embrace solar, wind, nuclear, and hydrogen, those same wells could turn the US into a clean power giant, securing its energy future. Who says you can’t teach old dogs new tricks?

Inventions
MIT’s new heat engine beats a steam turbine in efficiency
A new highly efficient heat engine with no moving parts could allow us to generate electricity from renewables year round.
Up Next 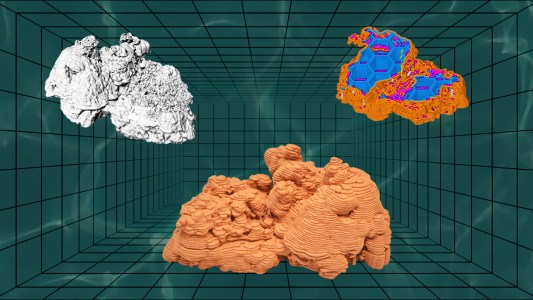 A new method for designing and 3D printing custom artificial coral reefs could make them more accurate stand-ins for the natural kind.