Aviation punches above its weight when it comes to greenhouse emissions — it is by far the highest emission form of transportation. Our modern mega planes may be the most efficient they’ve ever been, but in 2019, they still churned out over 915 million tonnes of carbon dioxide.

To make matters worse, one of our best zero-emission alternatives — hydrogen — is far too heavy and bulky to build a usable airplane. Or at least that is what we thought.

The California startup HyPoint recently announced their plan to make a hydrogen-powered aircraft with nearly three times the range of a turboprop commuter jet.

But how is this possible? And could this be the future of aviation?

The problem: Sustainable aviation is one of the most challenging engineering problems of our time. Far more so than cars, airplanes are very sensitive to weight and size.

To get a zero-emissions aircraft with a similar range to a jet would take enormous heavy batteries or a gigantic hydrogen tank. But these would be so large and heavy that the flying abilities or payload of the plane would have to be severely limited in order to match the range.

Hydrogen is one of our best zero-emission alternatives, but it’s believed to be too heavy and bulky for a usable airplane.

This is why many have looked to carbon-neutral biofuels as the sustainable route for aviation. In theory, this is great! No need to change any infrastructure or replace current planes. Just switch out the fuel, and we have ourselves zero-emission flying.

But biofuels have some major problems. This fuel costs an arm and a leg, and there isn’t enough supply to meet the demands of the aviation industry.

In short, we need a better solution. One that isn’t too cumbersome or hefty yet can keep the aircraft going for hours.

The engine: HyPoint and Gloyer-Taylor Laboratories (GTL) believe they have found that solution: a hydrogen fuel-cell-powered aircraft that could triple the range of a commuter jet.

But how have they pulled this off where so many designs have failed?

Firstly, HyPoint has a unique fuel-cell design. By using high-temperature membrane technology combined with air-cooling, they have created a fuel cell that is lightweight, compact, and far more powerful than any other fuel cell to date. Their system can be as small as 50 kW for drones or as big as 10MW for commercial jets, at a power density of more than 2 kW/kg.

If you compare that to the 1.4 kW/kg of the jet engines found in the latest Boeing 777s (11.5 MW & 8.2 tons), you can see just how incredibly power-dense HyPoint’s engine is. This remarkable leap in technology is why HyPoint’s design may be able to compete with fossil fuel planes where other hydrogen planes have struggled to get into the air.

The fuel: But we still need to store the hydrogen somewhere. This is the next major engineering challenge.

Normal hydrogen tanks are huge and unwieldy. While hydrogen is light, it isn’t very energy dense, and the gas doesn’t compress much at normal temperatures. So in order for a plane to carry enough hydrogen for a typical 8-hour flight, the hydrogen tank would need to be almost as large as the fuselage!

But strapping such a massive tank to the outside of a plane would dramatically increase drag, simultaneously making the range much shorter, which means you need a much larger tank and so on in a vicious circle.

But GTL, which has partnered with HyPoint, has a solution: carbon fiber cryogenic hydrogen tanks.

Cryogenic hydrogen is extremely cold: around -240°C (or -400°F). This turns it into a liquid with twice the density of ordinary condensed hydrogen. However, these frigid temperatures are difficult to achieve, particularly on a plane.

But by using insulation, venting, and onboard cooling, GTL says that it can keep the hydrogen in a liquid state without adding too much weight, size, or power usage.

Using carbon fiber and other exotic materials, they say their cryogenic tanks can hold ten times more hydrogen per kilogram than current cryotanks! This combination of density, compact size, and light weight is perfect for aviation.

How it stacks up: HyPoint and GTL ran a simulation to compare HyPoint’s & GLT’s cryotank hydrogen power system to the range of a De Havilland Canada Dash 8 Q300 with its everyday turboprops (a type of jet engine that powers a propeller). These are the kind of engines you’ll typically see on short-haul commuter flights.

Even better, the retrofit likely won’t impact the number of passengers it can take, all while producing zero emissions. Based on this simulation, this may be the first usable net-zero commercial aircraft.

What’s next: Sadly, this plane hasn’t yet been built. However, HyPoint and GTL intend on getting this technology in the skies as quickly as possible, although there’s no exact timetable. But it is at least plausible that we could see zero-emissions passenger planes at some point down the line

First, carbon-neutral hydrogen prices are set to plummet over the next few years as economies of scale make the machinery needed to refine hydrogen without fossil fuels far cheaper. Some are predicting that hydrogen could see a cost reduction of 70% or more by 2035.

Second, according to HyPoint and GTL, their technology has a far longer service interval than a jet engine. This means these planes can stay in the air for longer (which means they can make more money) and potentially cost less to maintain. Not only does this mean the cost of flying could go down, but it is also a great incentive for operators to switch to hydrogen.

This technology was unthinkable only five years ago. So, what’s the catch?

Well, this technology has yet to prove itself in a real-world application. But even once it manages to get into a working plane, there are still countless hurdles in the way for HyPoint and GLT, such as safety, regulatory assessments, test flights, and more. It is an uphill battle to turn their technology into a globally used solution, which means it could be a long time before we can use this invention.

However, what HyPoint and GTL seem to have created by far our best answer to a green aviation industry, so let’s hope they can figure it out quickly. After all, it would be nice to keep our jet-set holidays without costing the Earth or our wallets. 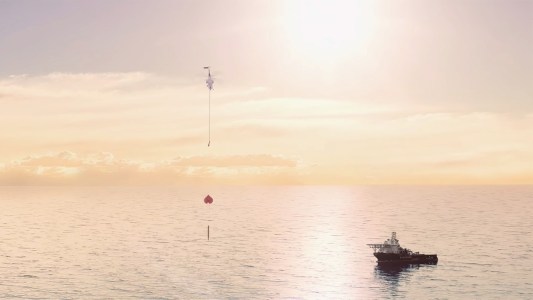 Aerospace startup Rocket Lab is going to attempt to catch a falling rocket using a long hook dangling from a helicopter.