Scientists have just discovered a coral reef taller than the Empire State Building near Australia — the first reef discovery of this size in more than a century.

In October, a team from James Cook University led by Robin Beaman was mapping the northern part of the Great Barrier Reef seabed when they discovered a gigantic reef. Using the research vessel Falkor, the Schmidt Ocean Institute did a follow-up expedition to the discovery site to validate that the coral reef was real.

The team explored the coral reef with the Institute’s underwater robot, SuBastian, and discovered that it is 1,600 feet tall and one mile wide. They live-streamed the dive and broadcasted it on the Institute’s website and YouTube channel.

“This powerful combination of mapping data and underwater imagery will be used to understand this new reef and its role within the incredible Great Barrier Reef World Heritage Area,” Jyotika Virmani, executive director of the Schmidt Ocean Institute, said in a statement.

The coral reef discovery is the first in 120 years and one of seven other detached reefs mapped in the last century in this region.

“We are surprised and elated by what we have found,” said Beaman. “To not only 3D map the reef in detail, but also visually see this discovery with SuBastian is incredible.”

The Great Barrier Reef — the world’s most extensive coral reef system — can be seen from outer space. It covers 133,000 square miles off Australia’s coast and is made up of 2,900 individual reefs and 900 islands.

Coral reefs are the most diverse fish habitats in the world, home to estimates of up to 8,000 species. They support fisheries and tourism. But many of the world’s reefs have been damaged or destroyed. What is left is in decline as climate change accelerates coral bleaching and extreme weather events that stress the ecosystem. Discovering the coral reef gives hope to ocean researchers and underscores that so much remains a mystery about the deep ocean.

“This unexpected discovery affirms that we continue to find unknown structures and new species in our Ocean,” said Wendy Schmidt, co-founder of the Schmidt Ocean Institute.

Banner image: R/V Falkor near Ribbon Reef #5 as ROV SuBastian finds evidence into the origins of the Great Barrier Reef.

Clean Energy
Researchers have found a way to pull more than 95% of uranium from seawater
Seawater contains millions of tons of uranium, but it’s too expensive to extract. A new material may change that. 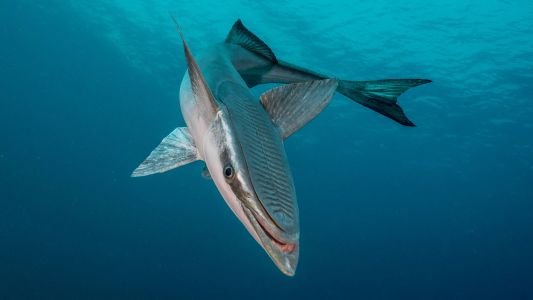 Using never-before-seen footage, researchers are learning more about how the remora moves around its hosts.

Animals
We finally have footage of remoras, the ocean's hitchhikers, in action
Subscribe to Freethink for more great stories
Subscription Center
Challenges
Video
Freethink
Subscribe
We focus on solutions: the smartest people, the biggest ideas, and the most ground breaking technology shaping our future.
Subscribe