A small algae-powered computer has now run for more than a year solely on the energy produced through photosynthesis — demonstrating an alternative way to power some of our billions of internet-connected devices.

The challenge: The Internet of Things (IoT) — the network of physical devices now connected to the internet — currently includes billions of items, and by 2035, experts predict one trillion phones, smart gadgets, and other devices will be online.

Today, many IoT devices are powered by lithium-ion batteries, but those have significant shortcomings — they’re expensive, their energy doesn’t last very long, and eventually they die altogether, turning into e-waste.

The Internet of Things is predicted to include one trillion devices by 2035.

An algae-powered computer: Researchers from the University of Cambridge and British tech company Arm have now demonstrated a different source of power for IoT devices: algae.

For their study, published in the journal Energy & Environmental Science, the team built a container about the size of a AA battery out of aluminum and clear plastic. They then filled it with water and algae that use photosynthesis to harvest energy from sunlight.

That process produces a small electric current. An electrode in the device uses that current to power a tiny computer processor commonly used in IoT devices.

It keeps going, and going… The algae-powered computer was set up so that after 45 minutes of working — calculating sums of integers — it would go into standby mode for 15 minutes and then repeat the cycle.

The device was then left on a windowsill where it has now worked steadily for more than a year, even at night — likely because the algae process some of their food during periods of darkness — according to the researchers, who submitted their study after six months of operation.

“We were impressed by how consistently the system worked over a long period of time — we thought it might stop after a few weeks, but it just kept going,” said first author Paolo Bombelli.

“It could work in applications where a small amount of power might be very useful.”

Looking ahead: The algae-powered computer could add numbers, but you’d need a lot of the devices to do the kind of processing undertaken by some devices — The Verge did the math and concluded that 333 million would be required to run a PC, for example.

More research is needed to see just how significantly the system could be scaled up, but joint senior author Christopher Howe told New Scientist he envisions the device having some practical uses.

“[It could work] in rural areas of low and middle income countries, for example, in applications where a small amount of power might be very useful, such as environmental sensors or charging a mobile phone,” said Howe. 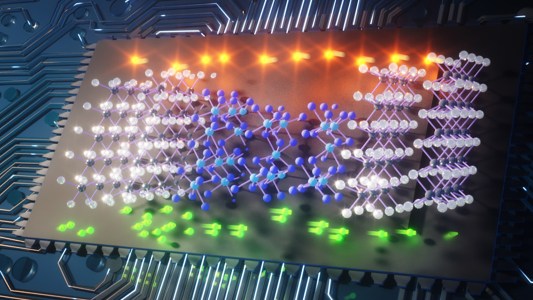 A device that gets electricity to flow through a superconductor in one direction without the use of magnets could revolutionize electronics.