Hacking photosynthesis could grow up to 60% more food, on the same land we use today, according to an international team of researchers.

The world’s rising population (along with rising prosperity, which is increasing demand for meat) means we’ll have to at least double the amount of food we grow by 2050.

To avoid plowing under millions of acres of wildland, we’ll need innovative research like this to help us get more from our farmland.

Photosynthesis, the process that plants use to turn sunlight, water, and carbon dioxide into fuel, is one of mother nature’s greatest marvels — but it turns out that plants aren’t very efficient at it. Only a fraction of the sunlight a plant receives is captured and used to grow.

That means we’re growing less food than we could be.

Researchers at RIPE (Realizing Increased Photosynthetic Efficiency) have spent the past several years figuring out how to make this process more efficient so that we’ll have bigger harvests.

“Like a factory line, plants are only as fast as their slowest machines,” said Patricia Lopez-Calcagno, a RIPE researcher. “We have identified some steps that are slower, and what we’re doing is enabling these plants to build more machines to speed up these slower steps in photosynthesis.”

Basically, if the slowest step in a car factory is installing car doors, you can speed up the whole process by using four robots, instead of one, to attach them.

To figure out where the bottlenecks are, the team modeled all 170 steps of photosynthesis. They found three areas in need of improvement: how plants adapt to changing light conditions, how they grab CO2 from the air, and how they transport proteins and electrons.

In 2016, the RIPE team discovered that the process plants use to protect themselves from too much sunlight can actually hinder photosynthesis.

Plants will bleach if they can’t get rid of the extra energy taken in by too much sun, so they protect themselves by making chemicals in the leaves that dissipate the energy as heat. But if the sun goes behind a cloud, the chemical process can take up to half an hour to reverse. Given that this happens many times a day, that’s a lot of wasted time and energy, resulting in a loss of anywhere from 7-30% of potential crops, according to RIPE.

But the researchers identified three proteins — already present in tobacco, the plant they used for the study — that help plants adapt to light quicker. They boosted the levels of the three proteins in tobacco seedlings, then tested how quickly the modified plants recovered from excess sunlight. The results? The modified plants grew 14-20% more than the unaltered plants.

Possibly the most important job in photosynthesis is pulling CO2 out of the air so that the plant can grow. Unfortunately, plants are not super precise about this and often grab oxygen (regular O2) by mistake.

We need innovative research like this to help us get more from our farmland.

“When it does that, it makes a toxic compound, so the plant has to detoxify it,” Amanda Cavanagh, a RIPE researcher told NPR. This detoxification process consumes a lot of energy, so that means there’s less energy for making food.

The team identified a handful of genes that could be inserted into the plants to create a new, more efficient detoxification process. They modified the tobacco plants and found that the plants not only grew faster but grew 20-40% bigger in both greenhouses and in the field.

Plants also need to move the energy they create when sunlight is transformed into chemical energy — kind of like electric lines from the power plant. But it turns out, the protein that plants use for this is pretty slow and inefficient. In August, the RIPE team found that by inserting a transport protein from algae, the two proteins could work together to share the load, making the whole job faster and more efficient.

With our powers combined: By combining these hacks, RIPE researchers estimate we’ll be able to supercharge photosynthesis — increasing crop yields by 60%.

But there’s still a long way to go before we can reap that harvest — for one, the RIPE team needs to translate these discoveries from tobacco to more food-friendly staple crops, such as cassava, cowpea, maize, soybean, and rice plants. (Not to mention all the safety and environmental testing after that.) 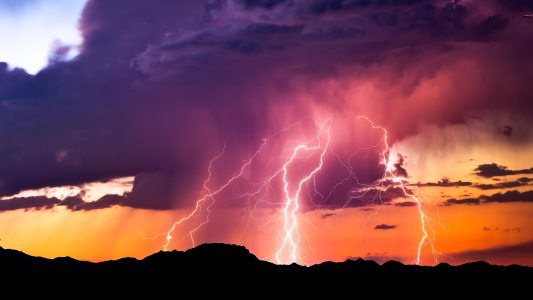 A new laser beam may allow scientists to control lightning, allowing them to divert a bolt to strike where it’s less likely to cause a wildfire.

Engineering
Scientists want to use a laser beam to control lightning
By Kristin Houser
Subscribe to Freethink for more great stories
Subscription Center
Sections
Video
Freethink
Subscribe
We focus on solutions: the smartest people, the biggest ideas, and the most ground breaking technology shaping our future.
Subscribe