Cold water first: On April 27, Neurable launched an IndieGoGo campaign for the headphones, offering backers a chance to purchase a pair for $200, half the expected retail cost.

The startup very quickly exceeded its goal for the campaign and now plans to continue developing its working prototype, with the goal of shipping the first Entens in May 2022.

Because the brain-sensing headphones are still in development, we don’t actually know what they’ll look like or what they’ll be able to do — but here’s what Neurable says to expect.

How they (should) work: From the outside, Enten will look like a standard pair of over-ear headphones, but hidden in its ear cushions will be 16 soft EEG sensors. Those sensors will detect electrical signals in the brain, and algorithms developed by Neurable will then interpret them.

A connected app will translate the brain data into useful insights, making recommendations to help wearers maximize their time.

The app might note that a person tends to focus more when listening to certain playlists, for example, and recommend queuing those up right before a deadline. If it notices they tend to lose focus about an hour before lunch, it might recommend eating earlier to stave off the slump.

The brain-sensing headphones will also be able to subtly increase noise-cancellation as a person becomes more focused. They’ll respond to gestures, too — users will be able to pause music or skip tracks with a wink or nod — and will note when you fidget, drink water, and more.

“Think of it as a Fitbit for your brain,” Neurable’s CEO Ramses Alcaide told the Washington Post.

The bottom line: We might not yet know whether Neurable’s brain-sensing headphones will be able to deliver on all of their promises, but there’s reason to be optimistic.

Neurable has produced a cutting-edge tech product before — its “Awakening” was the world’s first mind-controlled VR video game.

For now, though, anyone hoping to increase focus will have to make do with standard noise-cancelling headphones and the “do not disturb” smartphone setting. 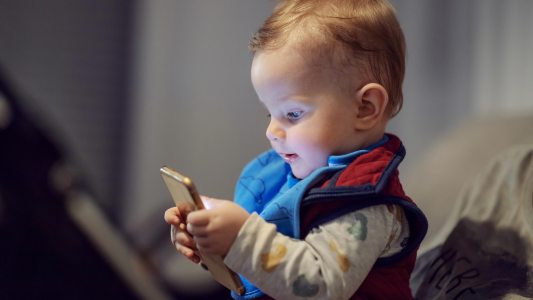 Apps
App can detect early sign of autism in toddlers
By Kristin Houser
Subscribe to Freethink for more great stories
Subscription Center
Sections
Video
Freethink
Subscribe
We focus on solutions: the smartest people, the biggest ideas, and the most ground breaking technology shaping our future.
Subscribe