The tension between law enforcement and communities around the country has been one of the biggest stories in recent memory. The issue is extremely complicated and evokes a lot of emotion on all sides of the debate. Sometimes it seems like the discussion around it is so divided that a solution is out of reach.

But a Duke robotics PhD student and his partner think they have a way ease tensions while deep-rooted differences are hashed out. Chris Reyes and Vaibhav Tadepalli started Trapezium Technologies and developed their Sentinel robot as a path to defuse potentially volatile situations.

At routine traffic stops, the robot is deployed from a police officer’s car and provides a way for the officer to complete the stop without stepping out of their car. Chris and Vaibhav understand that their robot isn’t a cure-all for all the recent problems, and don’t think it can replace the experience and training of law enforcement, but they do think they can use technology to create better outcomes for everyone involved.

We sat down with Chris Reyes to learn more about the project and how they think the robot fits into this important discussion.

Freethink: This is a pretty ambitious issue to take on. Why this?

Chris Reyes: The partner I worked with, we’re always bouncing different ideas off of each other. We found out that we both have the same entrepreneurial drive and the want to do more with our education.

We spent a while thinking about what we can do that has a big impact. Because we don’t want to waste our time on a gadget or something. Which is fine, we need gadgets in our lives. But we really wanted to make an impact.

We were brainstorming a lot. And then these shootings kept happening; police shooting civilians, civilians shooting police. It seemed like every week something was happening. And it was always on the news and it was always the conversation we were having in the lab. And we said, “How can we help this? How can we fix this? What can we do?”

We stumbled upon this idea. The question was: what’s the main issue? The human interaction is kind of a tricky thing. And that’s what causes a lot of issues. What if we had a sort of interface or a buffer zone? And that’s we came up with.

**FT: So tell us about the robot and what it actually does.**

CR: It’s basically a telepresence robot. It gives you audio and visual presence remotely. It’s mounted on an officer’s car. An officer will pull somebody over and, the officer would press a button, and the robot drives over to the suspect’s car. Then a screen raises up and you can begin two-way communication. We’re trying to give the robot some of the same senses that a cop would have. We’re giving it different machine visions so we can actually read the license plate; read the make and model of the car; detect colors; make a scan and populate driver’s license data.

We developed a chemical sensor that can detect the presence of alcohol. We’re actually working on fine tuning some of the detectors. They can detect alcohol at a much lower level than a human could.

We can detect the presence of marijuana and other types of smokes and different types of volatile organic compounds. The chemical detection is one of the key points. There are certain things that you just can’t smell or can’t detect that a chemical sensor could. Being chemists we know how to tune chemical detection.

It also helps cops make more informed decisions. The cops try to look for certain things to detect if somebody’s impaired. What this will do is give the cop an extra tool. If the robot actually detected something – a measurable signal – they’ll be able to say: “Now I’m not just using my judgment. My robot actually detected something so now I can proceed.”

Another feature of it is if the officer needs to get out, the robot can pull back and act as a third witness. We’ve all seen video of the body cam and it’s kind of hard to tell what’s going on from the angle of a body cam. But this allows for a third person view. It can see everything that’s going on.

FT: What has the reception been from law enforcement?

CR: Fortunately it’s actually been really great. They really like the idea because it means safety on both sides. We want to make it so, at the very least, it just streamlines the process of pulling somebody over. In an ideal case, nobody has to get out of the car.

I’m from Texas and they have some fast highways where you have 18-wheelers traveling 70-miles-an-hour down the road. You don’t want to be standing outside of your car under the elements. If you’re in a situation where you know it’s a higher risk situation, it gives them that distance and safety.

My partner actually went on a ride along with a police officer and he got to be involved in a couple of speeding pullovers. He said when they pulled somebody over, he stayed in the car, but he said his heart was pounding the entire time. Just sitting there when the cop got back he talked to her and he was like “you know I was so nervous.” And she was like “if you’re nervous, imagine how we feel every time we go out there?”

And that’s when we knew that we were on to something. We want to ease that tension on both sides. Our goal is to ease the tension. I think that’s where a lot of problems come from.

FT: Is there a downside here? Is there a human element that the robot just can’t replicate?

CR: Some of the things we’re looking at when we talk to a police officer is that an officer is very well trained at assessing when somebody’s nervous or acting suspicious. They will see thousands of people throughout their career. They can tell when something is up. And that’s hard to put into a robot. We can put in sensors that can detect heart rate. And we can see increases in heart rate. But sometimes there is comfort in talking to a human verses talking to a computer screen. We want it to be as personal as possible. We want it to be as familiar as some kind of home appliance that people would be familiar with. Some people just aren’t comfortable with that type of technology or removing human interaction, but we feel that technology can help us. We want to use technology to help, not inhibit.

FT: How close is this to actually coming to local police departments?

CR: We’re currently on our fifth version of the prototype. We got a private investor to get us started and then we kind of boot strapped the rest of it ourselves. That’s enabled us to get to this point. With Indiegogo we want to be able to take it to the next level. Because right now we built this prototype and it works and it runs. We’ve done a field test. We’re working closely with the police department. They really help us with the iteration process. We presented them with a very fresh prototype. And they’re like “oh this great, but it would be nice if it had this and it would be nice if it had that.” And so we iterate, come back, iterate, come back. With this last one we’re pretty close to a finalized design.

FT: What does the robot cost?

CR: Right now we’re estimating somewhere between $7,500 to $10,000. Of course everything’s supply and demand and if we can get cheaper parts. We want to keep as much of it 3D-printed because that’s our key right now for keeping things very cheap.

Most of all the structural components, the frame, the body, we’re making it modular. It’s all 3D printed. Robotics are very expensive, but 3D printing allows us to bring the cost down. 3D printing’s pretty cheap. And allows us to iterate – if something breaks just print another one. Right now I think the cheapest comparable robot in the market is around $15,000 to $20,000 and they can go up to $150,000 to $200,000. We want it to come in well below that so that every police department in every type of community can afford one.

FT: Do you get any criticism that this is just avoiding the root problem? That this is more of a band-aid than a real solution?

CR: We actually do. Especially online. A lot of the comments are pretty strong on both sides. On one side it’s “if people would just follow the laws, this wouldn’t happen.” On the other side it’s “well we need better training.” There is a bigger problem that needs to be addressed. It’s a big deep-rooted problem. It’s a very tough issue to deal with or even talk about. We know our robot isn’t going to fix the problem, but we know it will definitely help and we want it to help. This would add a buffer while we continue to work on those things.

I’m Hispanic and I come from a pretty bad part of a town in South Texas. Relations between the community and law enforcement were rough. I also grew up always taught to interact carefully with law enforcement. I have been pulled over several times and it is nerve-racking thinking “where am I?” and “who am I?” It’s a scary thing. It’s nice to know there could possibly be a little buffer zone in there.

FT: As a robotics PhD student, there are surely a lot of ways you could put your education to use. Why are you pouring your talents into this project?

CR: I’ve always, especially since having kids, wanted to make a difference in the world. When considering research ideas, no matter what it is, in what field, we always ask “how does it benefit society?” or “how does it help promote our understanding of the world?” And that became a question that I asked myself whenever I think about new ideas. And sometimes it does weed out some ideas that could be more lucrative.

When I was younger I was like “okay, what idea makes me the most money” and now it’s more “what idea would create the most impact?”

Surveillance
Computer scientists explain how to stop smart devices from spying on you
“Smart” appliances tempt you with useless conveniences, but myriad privacy violations lie just beneath their shiny exterior. 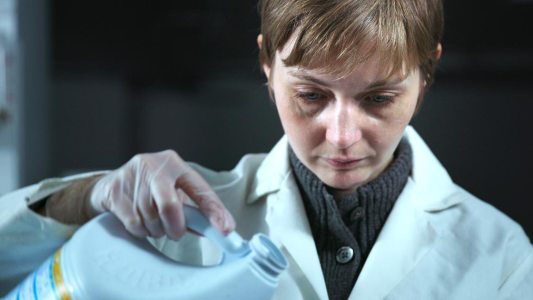 Surveillance
Meet the artist and activist who wants you to erase your DNA
Subscribe to Freethink for more great stories
Subscription Center
Sections
Video
Freethink
Subscribe
We focus on solutions: the smartest people, the biggest ideas, and the most ground breaking technology shaping our future.
Subscribe