More than a decade ago, Tesla helped revolutionize the automotive industry with all-electric vehicles. Today, Eviation, a startup based in Washington, looks ready to do the same with airplanes.

“The auto industry has led the way in terms of early adoption,” Eviation co-founder and CEO Omer Bar-Yohay told Freethink, “so aviation is a natural next step.”

Electric airplanes have long held the promise of cheaper flights and lower emissions, and numerous startups — even NASA — are designing their own. But most of these designs  are years away from getting a fully electric passenger plane into the air.

Eviation, meanwhile, claims it will do so by the end of 2021 — though time is running out and no date has been announced.

Eviation was founded in 2015 with the goal of bringing the first all-electric commuter aircraft to market. It was—and remains—an ambitious goal that has eluded the world’s largest aircraft manufacturers.

“The biggest challenge is building a team with both the vision and technical expertise, as well as the ability to evolve and learn,” said Bar-Yohay.

After spending the first few years in the dark, Eviation burst into the spotlight at the 2019 Paris Air Show, where they showed off a static prototype of their debut model named the Alice.

It was an instant hit. Time magazine named the Alice one of the top inventions of 2019.

Now, more than two years later, the world’s first electric commuter aircraft is almost ready to take to the skies.

The benefits of electric aircraft

The simpler design of electric motors also means they should require less maintenance and run longer before needing a rebuild.

Cheaper fuel and cheaper maintenance means a cheaper flight for the consumer.  Eviation claims that their aircraft — named Alice — will be at least 35% cheaper to operate compared to non-electric airplanes.

“The beautiful part about this plane, beside it being an awesome plane and looking great is that it makes economic sense today,” Bar-Yohay told ABC News. “Per hour of flight, we’re at around $100-$120 dollars of cost for the battery depending on how it’s being operated and used. That’s dramatically cheaper than the maintenance cost of the equivalent system.”

There is also the environmental impact. Currently, aviation contributes about 2% of global emissions, and this number could rise dramatically in the coming decades. The International Civil Aviation Organization projects that emissions could triple by 2050.

Just like electric cars, the emissions from an electric plane depends on the source of electricity used to charge them. A recent Finnish study estimates that the Alice would produce less than 50% of the emissions of a conventional aircraft. If the Alice is charged with clean energy, the emissions reductions would be even greater.

The challenges of building an electric aircraft

However, technical barriers have kept electric aircraft more dream than reality. For one, the energy density of current batteries is lackluster — batteries are not as powerful, per pound, as jet fuel. So, electric aircraft will have limited range until technology improves.

Additionally, batteries are heavy;  jet fuel is, too, but the fuel burns off as it’s used up which means the plane gets lighter with the more fuel it burns. That’s not the case with batteries — the weight of the battery stays the same regardless.

Then there is the challenge of keeping the batteries cool.

“Batteries need…liquid cooling systems,” says Brian Kish, an associate professor of aerospace, physics, and space sciences at the Florida Institute of Technology. “In addition, every cell in a battery needs to be monitored to prevent thermal runaway.”

Eviation is well aware of these issues—in January of 2020, a fire broke out that ultimately destroyed their original prototype. According to a report from the Times of Israel, the fire originated from a ground-based testing battery pack.

The limited energy density of current batteries means ocean-crossing jets are off the table for now—the massive batteries required to cover that distance would make the plane far too heavy to get off the ground.

However, shorter regional routes are a possibility, and this is exactly the market that Eviation is aiming for. The Alice can fly more than 500 miles before needing to recharge, which could cover about half of all flights in the United States according to data from the Brookings Institution. This means the Alice should be able to make a commuter flight between Los Angeles and San Francisco without needing to recharge.

Despite these challenges, electric aircraft have gradually begun to take to the skies. Most of them have been one-off demonstration planes, but in June of 2020 the two-seat Pipistrel Velis Electro became the first electric plane to gain type certification in Europe, allowing them to mass produce the aircraft for customers.

It was an important first step for the electric aviation industry, but between the two-seat cabin and a 50 minute max flying time, the Velis Electro will be limited to training new pilots.

Eviation’s Alice holds much greater promise for the real world. It can carry a total of eleven people—two pilots and nine passengers—and fly more than eight times further before needing to recharge.

This opens up new markets in both passenger air travel as well as cargo-hauling (DHL has already ordered 12 aircraft).

Bar-Yohay says that Eviation’s “secret sauce” is all about integrating the battery into the structure of the aircraft—this lets them use a bigger battery that can fly longer distances without making the plane too heavy.

However, this approach requires them to create an entirely new airplane design from the ground up instead of just converting an existing aircraft.  While a new design lets Eviation build a more impressive plane, it also makes the testing and certification process much more difficult.

Eviation isn’t alone in their quest—a variety of other companies are pushing ahead with electric models of their own. Many of them are developing electric Vertical Take-off and Landing (eVOTL) aircraft, which don’t require a runway. While these models have a number of potential uses, they lack the range and passenger capacity to replace conventional airplanes.

Eviation is among a small number of startups trying to develop models that can replace traditional fixed-wing airplanes.

This July, United Airlines placed an order for 100 aircraft (capable of carrying 19 passengers each) from Swedish startup Heart Aerospace. Heart plans to make their first flight in 2026.

Budget airline easyJet has been working with LA-based startup Wright Electric to bring a 186 passenger jet to market by 2030.

The future of electric air travel

Eviation still needs to undergo the rigorous regulatory certification process before the plane can be mass-produced. If all goes according to plan, both variants of the Alice (the commuter version, for passengers, and the cargo-hauling version) will be in service in just a few years.

While the Alice would represent a monumental step for electric aviation, it will ultimately play a niche role in the industry as a whole. Aside from the limited range, the Alice is still small relative to many planes today.

Omer Bar-Yohay won’t give any hints on Eviation’s plans after the Alice. However, he does acknowledge that as battery technology improves, the industry will focus on planes with greater payloads—meaning larger planes that can carry more passengers.

But he also notes reasons to be optimistic. “Successful subsystems can be used for multiple aircraft, similar to the way automakers use subsystems from known, reliable vendors.”

That means the success of the Eviation Alice could help pave the way for other electric aircraft to follow.

The industry remains a long way from an electric 747, but electric flight on a smaller scale is just around the corner. And Eviation is confident that consumers are ready.

“Electric propulsion means operators will be able to fly more planes into smaller airports closer to homes and at a lower cost,” says Bar-Yohay. “We expect the public to be highly in favor of electric flight and primed for speedy adoption.” 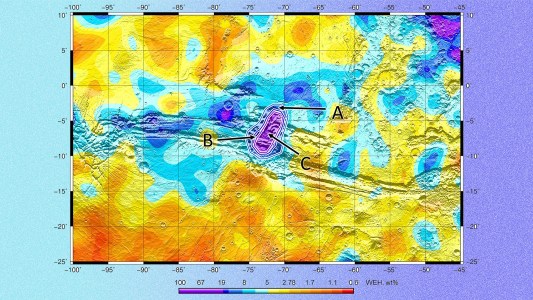 Scientists have discovered a huge store of hidden water on Mars, and it’s just below the surface of the Valles Marineris canyon system.