The fuels release as much carbon dioxide (CO2) when combusted as they absorb from the atmosphere when produced, so no additional CO2 emissions are generated.

The new process could further efforts to combat climate change by decarbonizing transport sectors like aviation, which is responsible for almost 3% of all human-made carbon dioxide emissions, shipping and road haulage.

Researchers, led by Aldo Steinfeld, Professor of Renewable Energy Sources at ETH Zurich, have developed an industrial plant that extracts carbon dioxide (CO2) and water from the air. Solar energy is then used to split these compounds and produce syngas – a mixture of hydrogen and carbon monoxide. This is then further processed to create kerosene and methanol which can be used as a substitute for traditional fuels.

The technology is now advanced enough to use in commercial operations. Funding is in place to build the world’s first industrial-scale production plant for solar fuels in Germany, which is due to come online in 2023.

Challenges do remain, though, if the new process is to be competitive and scalable.

The study, published in Nature, estimates “solar kerosene” fuel would cost between $1.35-$2.2 (€1.20-€2.00) per litre once produced at scale. But high initial investment costs are a major barrier, and the business model is yet to be proven. The report’s authors suggest bodies like the European Union adopt a quota system requiring airlines to source a proportion of their fuel from solar sources, to help pay to scale the technology.

As well as its environmental credentials, the process has another benefit. Its reliance on sunlight makes desert areas prime land for production sites, leaving valuable agricultural land available for growing crops and rearing livestock. This is in contrast to biofuels which often rely on crops being grown to be converted into fuel.

The sky’s the limit

This view is shared by the International Energy Agency (IEA), with its Sustainable Development Scenario anticipating sustainable jet fuels will account for 10% of aviation fuel demand by 2030, and almost 20% a decade later.

Global passenger numbers are expected to reach 7.5 billion by 2035, up from 4.5 billion in 2019 before pandemic disruption halted many flights, according to IATA. Investment in developing and adopting cleaner fuels compatible with existing aircraft is therefore key to realizing these ambitions. While the business case for sustainable aviation fuel (SAF) is still in development, scaling up this technology will bring down costs.

Initiatives like the World Economic Forum’s Clean Skies for Tomorrow Coalition, provide a platform for airlines, airports, fuel suppliers and other global aviation stakeholders to accelerate SAF deployment. More than 60 companies have so far joined forces, aiming to power global aviation with 10% sustainable fuels by 2030, as part of efforts to reach net zero emissions by 2050.

​​“Achieving our ambition will require commitment, innovation and cross-industry collaboration from a wide range of stakeholders,” said Lauren Uppink Calderwood, Head of Aviation, Travel and Tourism at the World Economic Forum.

Climate Crisis
This new idea could reduce steel’s carbon emissions by 90%
By B. David Zarley
Up Next 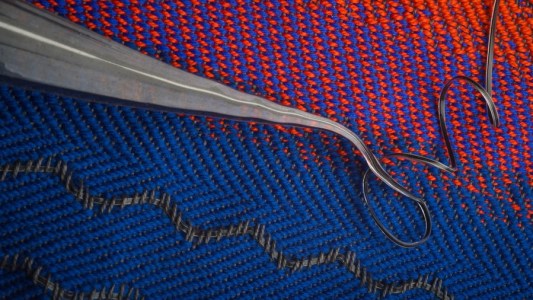 An MIT team has designed an “acoustic fabric” to convert sound vibrations into electrical signals.