Two branches of the U.S. military are steps closer to achieving the ray-guns currently found only in sci-fi stories.

The U.S. Office of Naval Research (ONR) has ordered a “compact, portable” laser weapon system, which they will use to shoot down drones. Meanwhile, the United States Air Force has received the Airborne High Energy Laser prototype (AHEL). They will flight test it next year on an AC-130J Ghostrider gunship.

The weapons: The Navy is calling their laser gun the Counter-Unmanned Air Systems High Energy Laser Weapon System (or C-UAS HELWS, for short). MZA Associates Corporation, based in Albuquerque, New Mexico, won the $18.7 million contract. They plan on having it completed between 2023 and 2025, reports Popular Mechanics.

“Under the contract with the Navy, MZA is developing a transportable laser weapon system to enable defense against adversary unmanned aerial vehicles,” Frank Peterkin, Program Officer at the ONR, told Forbes. “The full system will still require machinery — trucks, cranes, et cetera — for initial emplacement and/or relocation to other sites.”

The Air Force is a few steps ahead. Lockheed Martin announced in early October that they finished testing their weapon in the factory and turned it over to the Air Force. The following steps are to combine the laser gun with a beam control system, and then ground testing will take place before installing the system on an AC-130J, reports The Drive.

The Air Force laser will purportedly be able to blast targets like an “electrical transformer, the engine of a pick-up truck, communication equipment, and a parked drone,” per The Drive.

The trend: The handheld laser gun may be only in films, for now, but versions of it are becoming more prominent in the military, in a growing trend toward laser weapon miniaturization.

It wasn’t long ago the Army announced they had integrated a laser gun onto a platform and created the first combat-capable prototype. The powerful beam is good for taking down drones by melting a wing, burning a hole in it, or taking out the fuel supply.

The powerful beam is good for taking down drones by melting a wing, burning a hole in it, or taking out the fuel supply.

The military has attempted to make lasers work in the past. The YAL-1 Airborne Laser Testbed was an early attempt, which consisted of a Boeing 747 airliner with a laser attached to the cone. But technical difficulties held it back, and it never got off the ground.

Then, in 2014, the military deployed the AN/SEQ-3 laser weapon system in the Middle East. Much smaller than a Boeing 747 but still too big to be handheld, the shipping-container sized laser gun had a power output of 30 kilowatts.

Achieving the handheld laser gun: We aren’t quite ready to anticipate the miniature laser guns, but this could be a step closer. At 84 pounds, Forbes called the Navy’s new 10-kilowatt anti-drone laser weapon “luggable rather than portable” —  about the same size as a 50-caliber machine gun, which could be mounted on a military truck. 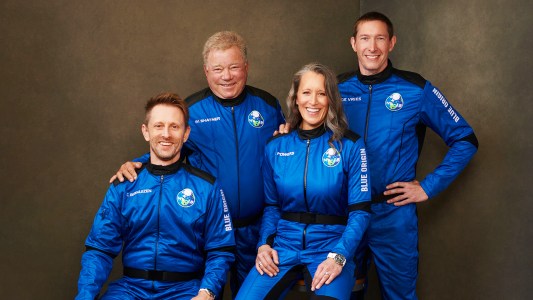