William Shatner has boldly gone where no 90 year old has gone before: space.

On October 13, the Star Trek actor was one of four passengers aboard Blue Origin’s second crewed flight. He’s now the oldest person to reach space — and he says the experience was life changing.

“What you have given me is the most profound experience I can imagine,” Shatner told Blue Origin founder Jeff Bezos. “I’m so filled with emotion about what just happened … It’s extraordinary. I hope I never recover, that I can maintain what I feel now.”

Going up: The flight lifted off from Blue Origin’s West Texas launch site at 10:49 a.m. ET and reached a peak altitude of 347,160 feet (the Kármán line, widely considered the border of space, is about 330,000 feet above sea level).

When the capsule landed just over 10 minutes later, Bezos was the one to open its hatch and greet the crew: “Hello, astronauts. Welcome to Earth!”

The overview effect: Shatner’s emotional response to the Blue Origin spaceflight wasn’t unique — many astronauts have reported feeling a positive shift in their perspective of Earth and life on it after seeing the planet from space.

“You develop an instant global consciousness, a people orientation, an intense dissatisfaction with the state of the world, and a compulsion to do something about it,” Apollo 14 astronaut Edgar Mitchell said.

This phenomenon has been dubbed the “overview effect,” and until recently, it was largely out of reach for people who weren’t professional astronauts (though researchers have been attempting to recreate it in VR).

Now that companies like Blue Origin are making good on decades of space tourism research, the view is becoming more accessible — and while it might just be celebrities and billionaires who can afford tickets to space today, that could change in the not-so-distant future.

Aerospace
A space film studio is launching into orbit in 2024
A new space module designed for the recording and livestreaming of movies and sporting events is expected to attach to the ISS in 2024. 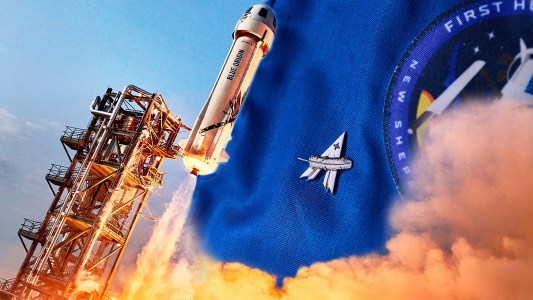 Jeff Bezos’ love of Star Trek inspired him to go to space. Here are a few other innovators to draw inspiration from science fiction.

Entertainment
Science fiction doesn’t predict the future. It inspires it.
Subscribe to Freethink for more great stories
Subscription Center
Challenges
Video
Freethink
Subscribe
We focus on solutions: the smartest people, the biggest ideas, and the most ground breaking technology shaping our future.
Subscribe