The first crewed Blue Origin flight, which took place on July 20, wasn’t just a milestone for billionaire Jeff Bezos’ aerospace company — it was also the first time a pilotless spacecraft has flown with an all-civilian crew.

The challenge: The cost of spaceflight is closely tied to the weight of whatever you want to send into space — a heavier payload requires more fuel to escape Earth’s gravity, and more fuel means more money.

While the cost of spaceflight has decreased dramatically in recent years, thanks to reusable rockets and other tech, it’s still far from cheap. That means space tourism companies like Blue Origin have to charge enormous ticket prices to cover the cost of flights and turn a profit.

The idea: To maximize the amount of money each Blue Origin flight could bring in, the company designed its rocket/capsule combo, New Shepard, to operate without a pilot.

That way, all six people on board would be helping pay for each flight — not taking a paycheck from the company.

“It’s simple math,” a person familiar with Blue Origin’s thinking told Reuters. “If you design a system so that you don’t need a pilot or a co-pilot, you can have more paying customers.”

The Blue Origin flight: For the first crewed Blue Origin flight on July 20, Bezos was joined on board by his brother Mark, Dutch student Oliver Daemen, and aviator Mary Wallace “Wally” Funk (Funk was not driving this flight, though).

The rocket lifted off in Texas a little past 8 a.m. local time, and when it was 47 miles above the Earth, the New Shepard capsule detached, soaring to a peak altitude of 66.5 miles.

The passengers then experienced four minutes of weightlessness before the capsule landed back on Earth, its descent slowed by parachutes. The entire flight took a little over 10 minutes.

Space psychology: In the past six years, Blue Origin has conducted 15 uncrewed test flights of its New Shepard system, and some employees were reportedly “frustrated” by the decision to send civilians up in the rocket before staff astronauts, according to Reuters.

They argue that the astronauts could have collected data that would’ve been useful for designing future flights, and that having an experienced pilot on board might have made the civilian crew feel calmer.

However, Marco Caceres, a space industry analyst for Teal Group, thinks the decision to have an all-civilian crew on the first Blue Origin flight might ease prospective space tourists’ concerns.

“One of the main goals of the New Shepard mission is to demonstrate that going to suborbital space is perfectly safe for the average person,” he told Reuters. “So there is a benefit to having as many average people on these flights as possible.”

The next steps: Two more Blue Origin flights are already scheduled for 2021, and while the exact cost of a ride aboard New Shepard hasn’t been made public, Bezos says the company is nearing $100 million in private ticket sales. 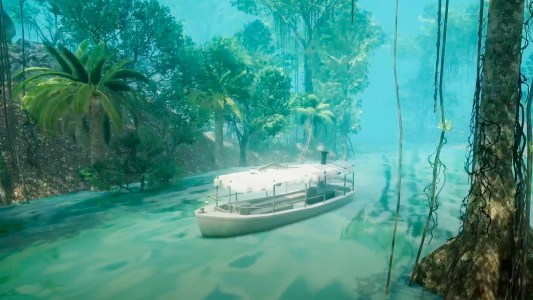 Series|Hard Reset
What will the Disneyland of the future look like?
7:50
By Stephen Johnson
Subscribe to Freethink for more great stories
Subscription Center
Sections
Video
Freethink
Subscribe
We focus on solutions: the smartest people, the biggest ideas, and the most ground breaking technology shaping our future.
Subscribe