On July 11, 2021, a Virgin Galactic flight helped smash that record, bringing the total number of humans beyond the Earth to 16 — and the chance of this record standing for 12 years is extremely low.

For decades, spaceflight was so expensive that, with rare exception, only governments or militaries could afford it. Now, thanks to reusable rockets and other new technologies, the cost is dropping, putting space within reach of private citizens.

In 2004, British billionaire Richard Branson founded Virgin Galactic in the hope that it could be one of the companies to ferry tourists into space. However, getting there has been far from easy, with numerous setbacks, including a deadly crash in 2014.

“I give Branson full credit for staying the course; he had plenty of opportunities to back out of this business,” former Virgin Galactic test pilot Brian Binnie told National Geographic. “It sounds so glamorous to get into the rocket business, but … when the rubber meets the road, it’s a real gut check.”

In early July, Virgin Galactic announced that it had finally secured FAA approval to begin carrying space tourists — and not just crew members — on its air-launched spaceplane, SpaceShipTwo.

Branson himself was one of the passengers aboard that first approved flight, which took off from New Mexico early on the morning of the 11th, soaring to an altitude of 53.5 miles — skimming the edge of space — before landing about an hour after liftoff.

“How you feel when you look down on Earth is impossible to put into words, it’s just indescribable beauty,” Branson wrote afterward. “I can’t wait for you all to get up there.”

There were already 10 people in space when Branson and his crewmates reached it (seven astronauts on the ISS, and three on China’s new space station), so their flight briefly brought the total number of people in space up to 16.

Some argue that the Virgin Galactic flight didn’t reach space at all, though.

NASA and the FAA consider the boundary between Earth’s atmosphere and space to be 50 miles above the planet’s surface. However, the majority of the world maintains that space starts at an altitude of 62 miles, a boundary known as the Kármán line.

“We wish [Branson] a great and safe flight, but they’re not flying above the Kármán line and it’s a very different experience,” Bob Smith, CEO of spaceflight company Blue Origin, told the New York Times on July 1.

The future of space tourism

Blue Origin just secured its own FAA approval to begin carrying people into space, and its billionaire founder, Jeff Bezos, also plans to be a passenger aboard his company’s first flight, which is scheduled for July 20.

With a crew of just four, that flight won’t set a new record for people in space, but between it and Virgin Galactic, the dream of space tourism is finally becoming a reality.

Sure, tickets cost at least $250,000 right now, but as these flights become more common, costs may drop, opening space up to more people.

It’s not hard to imagine a near-future in which multiple spacelines are offering flights on the regular — meaning we’ll see the number of people in space at one time broken again and again.

“We are here to make space more accessible to all and turn the next generation of dreamers into the astronauts of today and tomorrow,” Branson wrote. “We’ve all just had the most extraordinary experience, and we want you all to have it, too.” 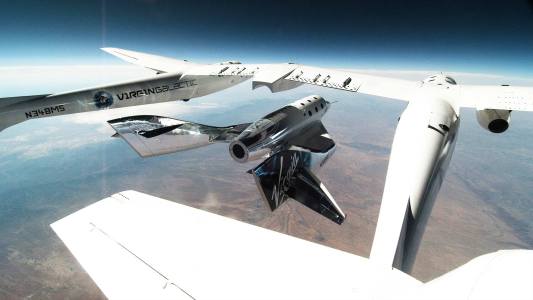 Virgin Galactic is the first spaceline to get the Federal Aviation Administration’s approval to fly space tourists — a huge milestone in space tourism.