British billionaire Richard Branson’s Virgin Galactic has become the first spaceline to get the go-ahead from the FAA to take up space tourists — a huge milestone in recreational spaceflight.

Space tourists: For decades, only governments could afford to launch people into space, but thanks to reusable rockets and other advances, spaceflight is now cheaper than ever.

That’s led to a burgeoning space tourism industry, with dozens of companies looking to take people on recreational trips into space — or at least the edge of it.

The challenge: Before any American companies can start offering space tourists out-of-this-world trips high above the Earth, they need to secure the blessing of the FAA, the U.S. aerospace regulator.

To do that, each company needs to prove that its spacecraft are safe — and that can be a lengthy process, including several expensive test flights.

SpaceShipTwo: Virgin Galactic’s plan for space tourism centers on SpaceShipTwo, a craft that doesn’t actually take off from land, like a rocket or plane, but is instead air-launched.

A plane called WhiteKnightTwo will carry SpaceShipTwo up to an altitude of 50,000 feet and then drop the spacecraft.

At that point, SpaceShipTwo fires up its rocket engines to propel itself — and the space tourists in its cabin — to suborbital space. When the craft returns, it lands on a runway horizontally, like an airplane.

What’s new? On May 22, Virgin Galactic completed its third crewed test flight of a SpaceShipTwo model, sending the VSS Unity on a trip 55.5 miles above Earth’s surface.

“We’re incredibly pleased with the results of our most recent test flight, which achieved our stated flight test objectives,” Virgin Galactic CEO Michael Colglazier said in a press release. “The flight performed flawlessly, and the results demonstrate the safety and elegance of our flight system.”

In the same release, Virgin Galactic announced that the FAA had officially updated its operator license, giving the company the greenlight to start carrying space tourists — not just crew members — on SpaceShipTwo.

Looking ahead: Virgin Galactic expects to complete three more test flights, including its first with a full crew.

If all goes well, the company could begin transporting space tourists as soon as early 2022. More than 600 people have reportedly already signed up for the trip — at a cost of up to $250,000 each. 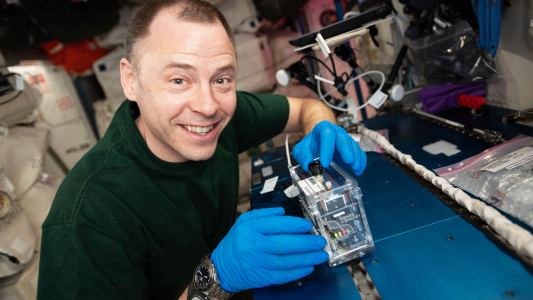 A first-of-its-kind experiment using CRISPR in space could help protect astronauts from DNA damage on long trips beyond Earth’s atmosphere.

CRISPR
Astronauts use CRISPR in space for first time
Subscribe to Freethink for more great stories
Subscription Center
Challenges
Video
Freethink
Subscribe
We focus on solutions: the smartest people, the biggest ideas, and the most ground breaking technology shaping our future.
Subscribe