A first-of-its-kind experiment using CRISPR in space — conceived by a team of high school students — could help protect astronauts on long trips beyond Earth’s atmosphere.

DNA damage: When astronauts are in space, they’re exposed to higher levels of radiation than we are here on Earth’s surface. That radiation can damage their DNA, potentially leading to cancer and other health issues.

Our cells do have several ways to identify and repair DNA damage, but sometimes those processes also introduce genetic errors. Studying those repair mechanisms — and the errors they might cause — could help us keep astronauts healthy during long missions.

The challenge: Researchers have tried to study DNA repair in space before, but for those studies, the DNA was damaged on Earth and then sent to the ISS so that astronauts could observe the repair process in low gravity.

But cells are thought to “decide” on a repair mechanism soon after damage occurs, meaning they might have already chosen a path before liftoff. There’s also a possibility that the trip to space itself influenced the repair process.

They proposed using CRISPR, the gene editing technology, to damage DNA on board the ISS. Astronauts could then use DNA sequencing technology to see exactly how the cell responded to the damage.

“The damage actually happens on the space station and the analysis also happens in space,” Emily Gleason, a miniPCR Bio investigator, said in a press release. “We want to understand if DNA repair methods are different in space than on Earth.”

These developments fill this team with hope.

An off-world first: In 2019, astronauts aboard the ISS successfully demonstrated the workflow using yeast cells, marking the first-ever use of CRISPR in space. Now, the students and researchers have published a paper in the journal PLOS One.

In the future, the technique could be used to precisely mimic the DNA damage caused by space radiation on human cells — and what astronauts learn from those experiments may help protect their colleagues during future missions.

“These developments fill this team with hope in humanity’s renewed quest to explore and inhabit the vast expanse of space,” senior author Sebastian Kraves of miniPCR Bio said. 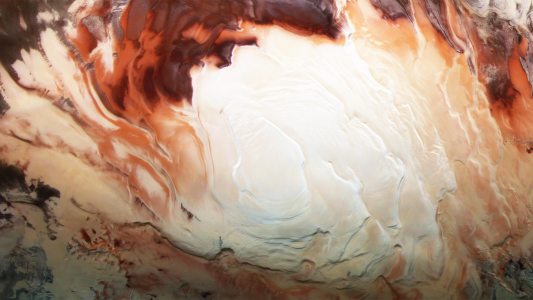 Either underground water on Mars is far more prevalent than previously thought or something we can explain is going on beneath the Red Planet’s surface.