At the edge of space, some 40 miles above Earth’s surface, is the mesosphere — a layer of the atmosphere where the air density is too low for aircraft and too high for satellites.

“Sometimes it’s called ignorosphere, in joke,” Igor Bargatin, a mechanical engineering professor at the University of Pennsylvania, told Wired. “We just don’t have access to it. You can send a rocket for a few minutes at a time, but that’s very different from doing measurements using airplanes or balloons.”

Now, Bargatin and his colleagues may have found a way to put the mesosphere within scientists’ reach: light-driven levitation.

Not being able to study the mesosphere wouldn’t be such a big deal if there weren’t so many interesting things happening there.

Most meteors burn up in the mesosphere, leaving behind atoms of iron and other metals that aren’t found in such high concentrations elsewhere in the atmosphere.

The mesosphere is home to types of auroras and lightning we don’t see elsewhere, and it also boasts unique clouds (potentially linked to climate change).

The chemistry of the mesosphere could help us track ozone damage, too, but for that to happen, we need a way to study it — and this new light-driven levitation technique could make that possible.

Levitation is the process of making something hover in the air, and it’s not exactly groundbreaking science — we’ve levitated objects using sound, magnets, gas pressure, electric fields, and other forces.

Light-driven levitation isn’t even anything new, but what’s unique about the Penn team’s technique is the size of the objects they’ve managed to levitate using light.

Sunlight alone would be enough to levitate disks carrying 10 milligrams of cargo.

While past techniques could only lift microscopic particles, theirs levitates objects large enough to carry tiny sensors — the kind, they say, that could gather data in the mesosphere.

“What we’re looking at is a new mechanism of levitation that has been used in the past for really small particles, ones that you can’t see,” Bargatin told New Scientist.

“But what we’re doing is making it work for structures that are big enough that you can hold them in your hands and therefore, at least potentially, will have real-life applications,” he continued.

The researchers started by cutting 6-millimeter-wide disks out of a sheet of ultra-thin mylar. The bottoms of the disks were then coated with carbon nanotubes — hollow threads of carbon only a few atoms wide.

When light hits the disks, the nanotubes heat up. Gas molecules in the air get temporarily caught up in the nanotubes, and that warms them to temperatures higher than those of the gas molecules bouncing off the top of the disks.

One of the laws of thermodynamics is that particles move faster as their temperature increases, so the molecules bouncing off the bottom of the disk do so more quickly than those bouncing off the top.

When the light-driven levitation technique was tested in vacuum chambers with mesosphere-like air pressure conditions, the disks hovered stably a few millimeters above the surface.

Based on simulations, sunlight alone would be enough to levitate disks carrying 10 milligrams of cargo in the mesosphere.

The payload could even potentially increase if hundreds of disks were connected by thin carbon fibers, according to the Penn team’s study.

Before that can happen, though, the researchers will need to prove it’s possible to use light-driven levitation to suspend even one of their disks in the mesosphere for any length of time.

That won’t be easy, given that it’s an extremely inhospitable environment — the average wind speed is 100 miles per hour, temperatures can drop to -150 degrees Fahrenheit, and space weather can damage communication devices at that altitude.

That’s a far cry from the congenial climate inside a vacuum chamber.

How the researchers would even get the disks into the mesosphere isn’t clear, but if they can work out the details, the “ignorosphere” might not be ignored for much longer. 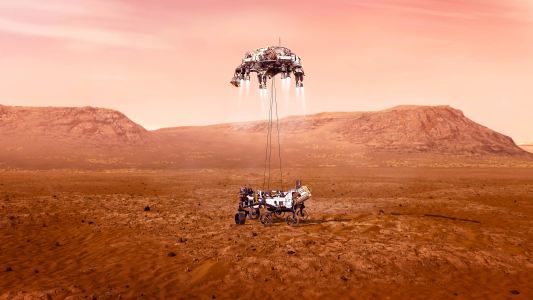 Aerospace
Perseverance’s Mars landing was a success
Subscribe to Freethink for more great stories
Subscription Center
Sections
Video
Freethink
Subscribe
We focus on solutions: the smartest people, the biggest ideas, and the most ground breaking technology shaping our future.
Subscribe