The Perseverance rover’s journey has ended with a successful Mars landing.

Seven minutes after NASA’s rover began its high-speed dive through the Red Planet’s atmosphere, it came to a stop on the surface — in one piece, just as hoped (and not in many pieces, as feared).

Because it takes 11 minutes for a radio signal to travel from Mars to Earth, NASA couldn’t directly control the rover’s landing — the craft had to execute its entry, descent, and landing (EDL) maneuver autonomously.

“Perseverance really has to fight her way down to the surface on her own,” Matt Wallace, a deputy project manager, told the New York Times prior to the landing attempt.

Here’s how the rover made that high-risk Mars landing seem easy.

The Mars Landing, Step by Step

Perseverance traveled 310 million miles between Mars and Earth nestled inside the Mars 2020 spacecraft. That trip took nearly seven months, and when the vehicle approached the Red Planet’s atmosphere, it was traveling 12,000 miles per hour.

Decelerating from that speed to one that would allow the rover to execute a safe Mars landing — and not smash into the planet’s surface — required a multi-stage maneuver.

Just before entering the Martian atmosphere, the Mars 2020 spacecraft shed its cruise stage that helped power and steer the vehicle during the journey.

For the first four minutes after entering the atmosphere, tiny thrusters on the spacecraft fired to keep the rover on target for Jezero Crater — the most difficult site for a Mars landing ever attempted.

At the end of those four minutes, the spacecraft was about 7 miles from the surface and traveling nearly 1,000 miles per hour — much too fast for a safe Mars landing, so it deployed a parachute more than 70 feet wide to decelerate further.

It then dropped its heat shield from the bottom of the spacecraft, which had been protecting the cameras and other instruments from the Martian atmosphere.

With that out of the way, those instruments could assess where the vehicle was headed and compare the location to a map of the safest spots for a landing in the crater and change course as needed to hit one of them.

When the spacecraft was about 1.3 miles above Mars’ surface and moving at roughly 200 miles per hour, it shed the component that housed the parachute and thrusters (the backshell). It then fired eight downward-facing rockets to slow itself even more.

That brought the speed down to a crawl, just 1.7 miles per hour, and when it was about 66 feet above Mars’ surface, the craft initiated its “skycrane” maneuver, lowering the Perseverance rover from the vehicle via a set of cables.

As soon as the rover sensed its wheels hitting the ground, it cut the cables and what remained of the Mars 2020 spacecraft crashed a safe distance away.

What’s Next for the Mars Rover?

Now that the nerve-wracking Mars landing is complete, Perseverance’s real mission can begin: exploring the planet’s surface for signs of ancient microbial life.

The Mars rover will also test a solar-powered helicopter during its mission — if that’s a success, it’ll be the first controlled flight on another planet.

The current timeline for the mission is about 687 Earth days (or one Martian year), but other NASA rovers have kept going long after their expected curtain call.

Opportunity’s mission was only supposed to last 90 days, for example, but the rover ended up exploring Mars for more than a decade, so Perseverance could be informing our understanding of the Red Planet for many years to come. 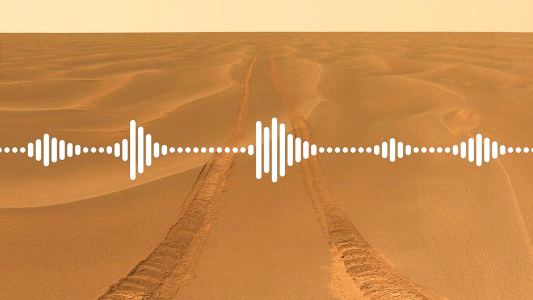 Two microphones on the Mars rover, Perseverance, are designed to record audio during its EDL sequence and subsequent mission.

Aerospace
NASA’s Perseverance Rover is mic’d up
Subscribe to Freethink for more great stories
Subscription Center
Sections
Video
Freethink
Subscribe
We focus on solutions: the smartest people, the biggest ideas, and the most ground breaking technology shaping our future.
Subscribe