On February 18, NASA’s Perseverance rover will plunge through the atmosphere of Mars, enduring “seven minutes of terror” that will — hopefully — end with it landing intact on the planet’s surface.

And we’ll be able to hear every nerve-wracking moment. Again, hopefully.

If all goes as planned, one of two microphones on the Mars rover will record audio during its entry, descent, and landing (EDL) sequence — letting us directly hear Martian sounds for the very first time.

Microphones on the Mars Rover

In 1976, NASA’s Viking 1 spacecraft snapped the first photo from the surface on Mars. Since then, Mars rovers have collected hundreds of thousands more pictures — but not a single audio clip.

NASA did attempt to send a microphone to Mars during 1999’s Polar Lander mission, but — like most attempts to land on Mars’ surface — that mission ended in failure.

So, why did it wait more than two decades to try again?

“In the space business, we don’t do a lot with microphones and sound, since most of our research is done in a vacuum,” David Gruel, assembly, testing, and launch operations manager for the Mars 2020 rover, told Wired.

Every instrument added to a rover increases its weight, which increases the cost of launch.  Microphones need electrical power to work, and that’s also limited on a Mars rover.

So, the short answer is that Martian audio just hasn’t a priority for NASA, but that doesn’t mean it wouldn’t be useful — which is why there are two microphones on the Mars rover currently en route to the Red Planet.

The microphones on the Mars rover will serve two very different purposes.

One is part of Perseverance’s SuperCam instrument, which — like all cool space equipment — features a laser. When it fires this laser at rocks, the microphone will record the audio.

It is stunning all the science we can get with an instrument as simple as a microphone on Mars.

NASA scientists can then listen to the recording for signs that the laser hit its target. They might be able to glean insights into the rock itself — such as its type or hardness — based on the audio, too.

The SuperCam microphone might also pick up ambient sounds on Mars, such as the wind.

“It is stunning all the science we can get with an instrument as simple as a microphone on Mars,” Baptiste Chide, a NASA scientist who contributed to the microphone, said in a blog post.

NASA spent years developing the SuperCam microphone. It bought Perseverance’s other microphone off the internet.

Seriously — it’s this microphone with a little grid added to protect against Martian dust.

This off-the-shelf microphone is the one that will record the sound of Perseverance’s EDL sequence, and according to Gruel, it’s success isn’t nearly as important as the SuperCam’s.

“Getting sound from landing is a nice-to-have, not a need-to-have,” he said in a blog post. “If it doesn’t happen, it will not impede the rover’s mission of discovery at Jezero Crater one bit. If even a portion of the landing sequence is captured on audio, that would be awesome.”

The Sound of Space

In October, while Perseverance was en route to Mars, NASA activated the EDL microphone to make sure it was in working order — and it seems all systems are go.

“The microphone we included to hear what it’s like to land on Mars was actually able to pick up Perseverance’s thermal system operating in the vacuum of space through mechanical vibration,” Gruel said.

“With apologies to the person who came up with the slogan for ‘Alien,’ I guess you could say that in space no one may be able to hear you scream, but they can hear your heat rejection fluid pump,” he quipped.

NASA has already posted that audio online. It’ll likely take a few days for it to process and release the recording from the EDL sequence to the public — but if all goes well tomorrow, we could be hearing the sound from one of the microphones on the Mars rover before the end of the weekend.

“You’ll hear the retrorockets roaring, then maybe the wheels actually crunching down onto the surface,” Gruel told Wired. “Then, when the descent stage cuts free and flies off into the distance, it’ll get quieter and quieter.”

“What’s left behind at that point will be the ambient noises of Mars, whatever they are.” 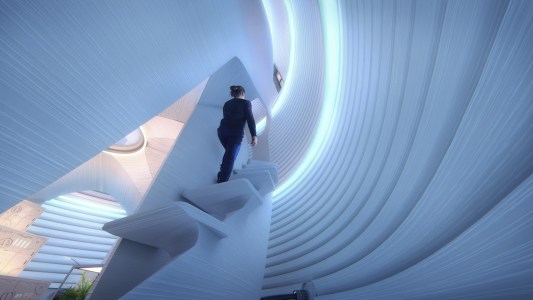 Landing on Mars is just the beginning — to live there, we’ll need to invent Martian concrete.

Outer Space
Building infrastructure on Mars is tricky — these bugs could help
By Amanda Winkler
Subscribe to Freethink for more great stories
Subscription Center
Sections
Video
Freethink
Subscribe
We focus on solutions: the smartest people, the biggest ideas, and the most ground breaking technology shaping our future.
Subscribe