The journey to Mars is almost over for NASA’s Perseverance rover, which was launched last July. On February 18, it’s expected to touch down on the Red Planet, where it will collect pristine samples of the land and test new technologies that may one day enable humans to visit (or even live) on the planet. NASA plans to launch a human mission to Mars by the late 2030s with the goal of eventually establishing a permanent base on the planet.

But getting there is just the first step toward human colonization of Mars. Once we arrive, we’re going to need to build our own infrastructure if we want to stay there long-term.

Building an environment for humans outside of Earth is tricky because it’s impossible to carry everything we’ll need for construction with us. Tools, water, concrete, machines, etc., would make the rockets too heavy and expensive. It currently costs around $4,000 to launch about two pounds of material into low Earth orbit — and much more than that to actually send it to Mars.

So we’ll need innovative solutions to build infrastructure in an affordable way once we’re there.

Last fall, scientists from the Singapore University of Technology and Design discovered that early Mars settlers could use a chitin mixture as a substitute for concrete to build their homes.

Once we arrive on Mars, we’ll need to build our own infrastructure if we want to stay there long-term.

Chitin is what makes up arthropod exoskeletons (for example, insects and crustaceans).

Although chitin is widely available on Earth, it’s not likely that chitin-producing organisms live on Mars…yet. The scientists hypothesize that they could very easily become part of an artificial ecosystem on the planet, providing a low-cost way to solve our Martian construction challenges.

“We know that there are several organisms containing chitin that can survive in outer space, in much more challenging conditions than Mars,” Javier Fernandez, who co-authored the study, told SYFY WIRE.

The researchers even suggested that insects could be part of the crew’s diet, providing needed protein while also producing byproducts for construction.

For this study, the researchers used simple chemistry to transform chitin into a sturdy, low-cost building material. They mixed the chitin (derived from shrimp) with a mineral designed to mimic the properties of Martian soil.

The resulting material was impressive: they were able to use it to construct a wrench and a miniature model of a Martian habitat. The wrench was sturdy enough to accomplish daily tasks, and the material was even successfully used as a paste to repair a hole in a pipe.

The resulting material was impressive: they were able to use it to construct a wrench and a miniature model of a Martian habitat.

“It feels like concrete but much lighter. Very light rock,” Fernandez told CNN.

The material is still in early development, but so far the team has proven that the chitin mixture is not only sturdy but requires minimal effort to produce — there’s no need for special equipment, and most of the material (Martian soil) is plentiful on the Red Planet. The future explorers just need to bring the insects.

“We have a route to…manufacturing buildings to tools from 3D printing to mold casting with just one single material,” said Fernandez.

With some adaptation, according to Physics World, the material could even be used on Earth as a more sustainable alternative to concrete.

Clearly, there’s a long way to go before we know for sure if this is a viable Martian concrete. The team is now investigating how this material will hold up under radiation, low pressure, and cold temperatures similar to Mars.

If the material holds up under these conditions, we may have found a material that can help us become an interplanetary species. If not…well, wouldn’t it be nice to find that out before spending many months flying to Mars and eating bugs?

There are dozens of other proposed plans for building a life on Mars — and almost all of them, like the chitin mixture, rely on materials science to transform Martian soil — a dusty rock layer — into a cement-like mixture.

A design agency called AI Space Factory won NASA’s 3D Printed Habitat Challenge in 2019 with a design called MARSHA, a 3-D printed model of an egg-shaped building that may one day house astronauts on the Red Planet. (Here are some awesome photos of Marsha)

“MARSHA is an 800 to 1000 square foot habitat, four stories tall that can house 4 astronauts for up to two years,” said David Malott, the company’s founder and CEO, according to CBC Radio Canada.

“It’s important to be structurally efficient as a shape because that means you can use less material,” Malott told CNET. “If you think about an eggshell on Earth, it is the way it is…because that’s a very efficient shape. The eggshell can be very, very thin, and still it has the right amount of strength.”

The structure would be made by mixing Martian soil with a plant-based bioplastic called polylactic acid — this is usually found in corn and sugar cane on Earth, but scientists say it could be extracted from plants grown on Mars. This mixture, claims Malott, is two to three times stronger than concrete.

In order to actually build it, NASA would need to send robots to the planet ahead of a human mission. The robots would collect the needed materials and then 3D print the building using a telescoping arm attached to a rover.

The ground floor is where the astronauts would enter and exit the building — their lab would also be here. The second floor would contain the kitchen and the third floor is where the bedrooms and bathrooms would be. The top floor is meant as a recreation center.

“Living on Mars is for the adventurous,” Malott told CNET. “I think there’s a certain romance of going to a place that no one has gone before.” 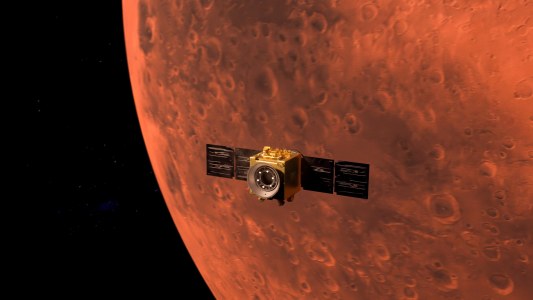 Two of the three Mars missions expected to reach the Red Planet in February 2021 have successfully completed the journey.