Today, the U.S. military has more than 1,500 dogs that can detect explosives, track enemies, or even help soldiers in combat situations.

These military dogs undergo extensive training to ensure they’ll be able to respond to the commands of their handlers, but the methods soldiers currently use to communicate with the animals can put them both in harm’s way.

Hand gestures are only effective if a soldier is within the dog’s line of sight — not the safest place for a handler to be if the animal is looking for an explosive.

And while a laser pointer is a great way to direct a dog’s attention — they can be trained to follow the laser or investigate objects it’s shone on — the light might draw the attention of an enemy, too.

The U.S. military tried putting cameras on the backs of its military dogs, so soldiers could watch the feed and then send verbal commands to the animals via a walkie talkie, but that just seemed to confuse the canines.

Now, the military is ready to try a different, high-tech approach: augmented reality goggles — for dogs.

The goggles are the work of inventor A.J. Peper, who launched his Seattle-based tech company Command Sight in 2017 as a way of merging his love for dogs with his interest in augmented reality.

He started by adding a camera system to a pair of Rex Specs, the goggles currently worn by U.S. military dogs to protect their eyes.

He then rigged the goggles so that he could see the camera feed and place a computer-generated dot designed to look like the laser point over an object in a dog’s line of sight.

Peper’s hope was that this dot would draw a military dog’s attention to the object just like a real laser pointer can, but without forcing a handler to potentially give away their location to an enemy. Using the goggle system, a soldier would also be able to communicate commands to a dog from a distance, something they can’t do with hand signals.

I was jumping up and down and beside myself.

Once Peper had his prototype, he started to test it out on his own dopey-faced Rottweiler, Mater.

Peper told Business Insider it took him about a week to get Mater used to wearing the goggles and then two weeks to get him to respond to a real laser pointer the way many military dogs are trained to do.

The final step in training was putting the goggles on Mater and getting him to recognize the AR dot — that took about another week.

“You can imagine my jubilation when I put the system on my dog, fired it up, and he reacted to the (dot). Up until that point, it had all been theory,” Peper said. “I was jumping up and down and beside myself. It was a really amazing moment.”

The federal government’s Small Business Innovation Research program funded the initial development of Peper’s augmented reality goggles, and it has already agreed to a second round of funding for further development.

During this stage, which is expected to take two years, Peper will be looking for a way to make the system more durable as well as wireless — right now, a handler would still need to be next to their dog to use the goggles.

While Mater was no doubt an excellent test subject, this round will also involve testing the goggles on actual military dogs, specifically the ones working for the Navy Special Forces. Each of those dogs has already undergone a 3D scan so a prototype can be custom-built to the animal’s specifications.

Ultimately, Peper’s goal is to have the goggles into the hands of soldiers in just a few years, giving them a safer way to communicate with their furry co-workers. 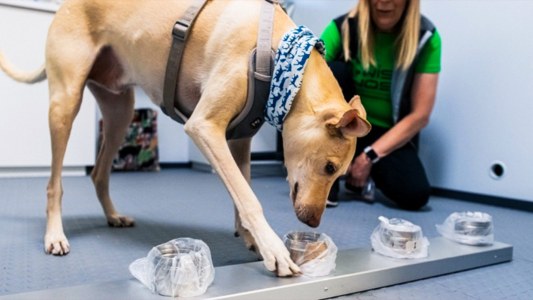 Coronavirus
Dogs that can smell coronavirus screen travelers at airport
By Kristin Houser
Subscribe to Freethink for more great stories
Subscription Center
Sections
Video
Freethink
Subscribe
We focus on solutions: the smartest people, the biggest ideas, and the most ground breaking technology shaping our future.
Subscribe