After seeing the Earth from space, at least a dozen astronauts have reported experiencing a shift in their attitudes about the planet and its inhabitants, a phenomenon dubbed the “overview effect.”

California startup SpaceVR believes that, if enough people experienced that cognitive shift, it could have a profoundly positive impact on life on Earth.

But space tourism is still far out of reach of most people, which is why the startup is aiming to recreate the overview effect here on Earth using a float tank and virtual reality.

A fixture of spas and wellness centers, float tanks are sound-proof, light-proof tanks, filled with saltwater that’s the same temperature as human skin — and dense enough so that you don’t sink.

In the tank, a person feels weightless, like they’re floating in air. They can’t see or hear anything — unless they’re wearing one of SpaceVR’s headsets.

The company designed the headsets specifically for float tanks, so they’re waterproof and resistant to the corrosive effects of saltwater.

More than 30 float tank locations across the globe have bought SpaceVR’s headsets, which they now use to offer customers the startup’s “Space Float” experience.

Currently, this consists of 45 minutes of recorded footage of the Earth from the vantage point of space, but SpaceVR plans to launch its own camera-equipped satellite into low-Earth orbit in 2020.

Once that satellite is in place, the company will be able to stream near-real-time views of the Earth to people in float tanks.

According to SpaceVR’s website, when people describe the “Space Float” experience, they say many of the same things as astronauts who’ve experienced the overview effect.

But that’s anecdotal evidence. To find out whether the VR setup can actually recreate the overview effect on Earth, SpaceVR has partnered with Steven Pratscher, a psychologist at the University of Missouri, for a clinical trial.

Hopefully it will wake people up to see that there’s more we can do to help save the planet.

Through that trial, about 100 volunteers will complete surveys before and after undergoing one of three experiences: a float tank without VR footage, VR but no float tank, or the complete “Space Float” experience.

The trial is expected to wrap up by the end of the year. When it does, Pratscher hopes to have answers as to whether “Space Float” can recreate the overview effect and inspire lasting positive change in people’s attitudes about the Earth.

“We’re causing (a) potentially irreversible impact on the Earth, so hopefully it will wake people up to see that there are more things we can do to help save the planet, protect the environment, and live in more harmony,” he told the Guardian. 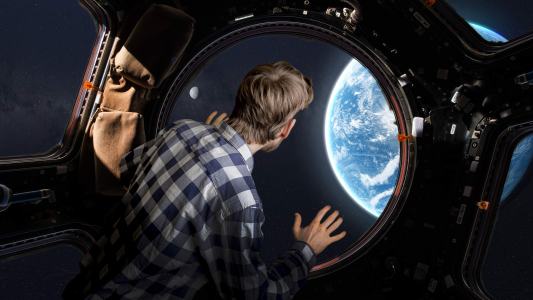 NASA’s space tourism plans, which include hosting private citizens on the International Space Station, are starting to come to fruition.

Aerospace
NASA’s plans for space tourism are becoming a reality
By Kristin Houser
Subscribe to Freethink for more great stories
Subscription Center
Sections
Video
Freethink
Subscribe
We focus on solutions: the smartest people, the biggest ideas, and the most ground breaking technology shaping our future.
Subscribe