Cryptocurrency and blockchain “news” is dominated either by enthusiasts (who claim that they will impact everything, from computerized record keeping to litter box cleaning) and detractors (who claim it is all a giant pyramid scheme that will leave a few people rich and many more broke). Nuance is difficult to find.

In the hope of providing that nuance, let’s look at the best arguments from the proponents and the cynics.

Blockchain is essentially a digital ledger. The ledger is kept secure through a combination of techniques from cryptography, game theory, and computer science. Each block — like a page in a physical ledger — is chained to all the previous blocks showing all of the transactions that have ever taken place on the network. These transactions are available for anybody to review. Any attempt to hack or cheat the network can be detected quickly and prevented because of this transparency, along with a few other, more technical protections.

While blockchain can do a lot of things, it is most famous for being the foundation of cryptocurrencies — chief among them are Bitcoin and Ethereum.

Bitcoin, as we have discussed before, is a digital form of cash that uses blockchain technology to keep track of transactions. The Bitcoin network — that is, the decentralized collection of computers keeping track of transactions — can send Bitcoins to other people and keep the records of having done so. These coins are seen by many as a potential store of value similar to gold, and those who keep track of the transactions and add blocks to the chain are called “miners.”

The other major blockchain network is Ethereum. Unlike Bitcoin, a number of applications can be built into the Ethereum network that do more than just send the native currency. Some popular applications include decentralized finance, a number of games, and the buying and selling of digital artwork.

Depending on who you talk to, these two systems are either the most important inventions since fire or much ado about nothing. Let’s see what both of these groups have to say.

The case for skepticism

Skeptics of cryptocurrencies in particular and of blockchain in general often point to how, despite Bitcoin being old enough to enter junior high school, only a small portion of the population uses it at all. In part, this is because cryptocurrency has limited real-world applications, so the overall effect on the economy is minimal.

Nobel Prize-winning economist and Big Think contributor Dr. Paul Krugman goes so far as to suggest that some cryptocurrencies strike him as similar to Ponzi schemes and muses that:

“…I’ve been in numerous meetings with enthusiasts for cryptocurrency and/or blockchain, the concept that underlies it. In such meetings I and others always ask, as politely as we can: ‘What problem does this technology solve? What does it do that other, much cheaper and easier-to-use technologies can’t do just as well or better?’ I still haven’t heard a clear answer.”

Cryptocurrency has limited real-world applications, so the overall effect on the economy is minimal.

Dr. Krugman is in good company: many leading economists are also skeptical of Bitcoin and blockchain. In an article about the microeconomics of cryptocurrencies, a group of economists argues that Bitcoin isn’t actually a fantastic store of value, saying, among other things, “the wild swings in valuation in cryptocurrency prices probably make cryptocurrencies less attractive than gold (at least at this stage) for those who invest in gold as a hedge against inflation. ”

While these authors are less skeptical of Bitcoin than others — after all, they did take it seriously enough to write a paper on the economics of it — they suggest that the currency is not quite the “new gold” that some proponents claim it to be.

The case for mild optimism

On the other hand, there are plenty of people who argue that blockchain is the future of everything and that the success of cryptocurrencies proves that the end of fiat money is just around the corner. While these people may be too optimistic, there are also experts who argue in favor of a mild optimism for the ability of cryptocurrencies to prove their use outside of the niche that they currently occupy and for blockchain technology to solve various problems.

Economist and professor Dr. Tyler Cowen has recently become one of these crypto optimists after years of skepticism. As he explained in an interview with Ezra Klein:

“Well, I had been a skeptic for quite a few years. But I am slowly being converted. And I would say most intelligent people outside of crypto still underrate them, because they don’t get it. It’s clear to me now it’s not a bubble. It is consistently attracting talent. Even with advances in normal payments technologies, the interest — extreme interest — in somehow using blockchain and crypto to make financial transacting and also borrowing and lending better, there’s just so much force behind it. To me, it just looks very much like something that is going to succeed and be significant.”

Fortune 25 executive and Big Think contributor Tony Saldanha is also optimistic about the technology. In his Big Think interview, he reminds us that cryptocurrencies are only one of the possible applications of blockchain technology and that the ability for blockchain tech to remove the middleman from a number of transactions and operations must also be considered.

NFTs and other non-cryptocurrency applications of blockchain

Some widely discussed uses of blockchain that go beyond the world of cryptocurrency include record keeping, data security, supply chain optimization, decentralized energy production and sale, and even voting in some places. These applications do not get as much press — digital security is often less exciting than crypto market meltdowns and rebounds — but are increasingly widespread. Companies like Maersk, IBM, and Pfizer use blockchain in some aspects of their operations.

Blockchain technology probably is not the future of everything, but it does have clear applications outside of its current limited use.

You might also have heard about non-fungible tokens (NFTs). Much like how owning a single Bitcoin means that there is a line in a digital ledger saying you own that coin, NFTs are lines in ledgers that say you own a particular thing. However, these things are non-fungible, meaning they are unique items. They can be digital works of art, tickets, music, or even shares of physical objects like a car or painting.

Blockchain technology probably is not the future of everything, but it does have clear applications outside of its current limited use. Claims that cryptocurrencies are just a Ponzi scheme are unfounded, though pump-and-dump scams are known to occur. Big thinkers will envision and implement several blockchain applications in the coming years, but whether they are good ideas remains to be seen. 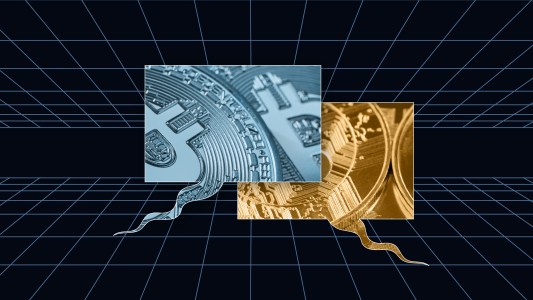 The ban could lead to an exodus of Chinese crypto entrepreneurs and a diffusion of crypto technology in Southeast Asia.

Opinion
What does China’s crypto ban mean for the tech world?
Subscribe to Freethink for more great stories
Subscription Center
Sections
Video
Freethink
Subscribe
We focus on solutions: the smartest people, the biggest ideas, and the most ground breaking technology shaping our future.
Subscribe