The final frontier is finally within earshot: All you need to spy on a space satellite is a roll of duct tape, some PVC pipes, scrap metal, and one dollar.

For a long time, listening to satellites required large and costly equipment, like a transmitter or radio dish. But through the NyanSat guided challenge, hackers are exchanging the bulky, expensive equipment for open-sourced software and cheap hardware to make a DIY satellite tracker.

The non-competitive challenge, designed by Red Balloon Security, the Air Force, and Defense Digital Service, guides participants in building a ground station, or satellite tracker, that can receive signals from space. The ultimate goal is to gain insight into satellite security by providing contest participants with the equipment needed to hack them.

Red Balloon Security, a cybersecurity provider for commercial and government organizations, is providing two key elements: an API to program ground stations to follow a satellite’s orbit, and Antenny, open-source schematics for a custom motherboard. The materials to build the motherboard would cost around $100, but Red Balloon is selling kits for just a buck to the open-source community.

“We designed this as a sneaky sidestep to make something inexpensive enough that everyone can have it,” Ang Cui, CEO of Red Balloon Security, told Wired. “We want to engage as many people as possible with something hands-on and get them interested in DIY space projects.”

Everyday activities like navigation, bank transactions, and phone calls rely on radio signals from a network of satellites. But those signals are vulnerable to hacking. They can be interrupted by “jammers” that, although illegal, are cheap and easy to obtain. Hacking satellites from the ground and intercepting data signals isn’t too far out of reach. The insight gained from this contest could help experts improve information security (“infosec”) and ensure those satellites remain reliable.

“The ultimate goal with these events is to show how accessible a lot of this technology actually is, and encourage more members of the infosec community to start researching these security issues and coming up with better ways to protect this technology from sophisticated threat actors,” said Cui.

Community engagement will be the key ingredient to find signals from space. One tracker could find a satellite on its own if it knew exactly where to look. But the potential is greater with more satellite trackers – finding a satellite in the sky is much easier if many eyes are looking for it.

“Let’s say we have 1,000 of these base stations distributed across North America,” says Cui. “If you could shine a radar beam into the sky, not knowing if something is there or not, the chances that it’s reflected back to you, the sender, would be astronomically small. But if we have thousands of base stations all listening, they could amplify and correlate from whichever station hears the bounce-back to find debris or other objects you wouldn’t know are up there.”

Already the community is coming together, discussing ideas and forming collaborations on a Discord channel.

Imagine – with some creativity and cheap materials – anyone can eavesdrop on space. 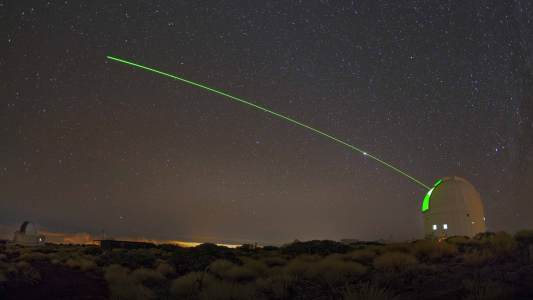