A new material that turns movement into electricity could one day allow you to charge your phone, watch, or other wearable devices simply by walking — and unlike other “smart fabrics,” this one can work for months, even after being washed.

The challenge: By embedding electronic components, such as batteries, sensors, or electrodes, into fabric, scientists have created garments that can monitor our health or turn our movements and body heat into electricity.

The smart fabric generates electricity from mechanical stress, such as tapping, squeezing, or stretching.

There may be countless potential uses for such a system waiting to be explored. But while we have seen prototypes, widespread use of smart fabric has been stymied by its lack of durability and reliability.

“[A] big challenge has been to develop something that does not degrade in function after being washed, and at the same time retains excellent electrical output,” said Lee Pooi See of Nanyang Technological University, Singapore (NTU Singapore).

The smart fabric: Lee has now led the development of a fabric that generates electricity when it’s subjected to some type of mechanical stress, such as tapping, squeezing, or stretching.

In a proof-of-concept experiment, continuously tapping on a small piece of the fabric (less than 2 square inches) produced enough electricity to drive 100 LEDs or charge capacitors used in common devices, such as phones.

The smart fabric’s ability to produce electricity was stable for five months and wasn’t affected by washing, crumpling, or folding. Because it is stretchable, waterproof, and breathable, the NTU Singapore team believes the material could be comfortably integrated into wearables.

“We think it could be woven into t-shirts or integrated into soles of shoes to collect energy from the body’s smallest movements, piping electricity to mobile devices,” said Lee.

How it works: To make their smart fabric, the researchers started by creating a stretchable electrode made from silver and a rubber-like material.

The electrode was attached to fabric made from a polymer that produces electricity when compressed, bent, or stretched (called PVDF-HPF) and perovskites, a material used in solar cells and LEDs.

Looking ahead: It’s not clear how much it costs to produce the smart fabric, and the NTU Singapore study doesn’t mention whether the team has plans to try to commercialize its tech.

Based on the proof-of-concept experiment, though, it doesn’t seem like you’d need a large piece of the fabric to generate a useful amount of electricity, and the researchers are now looking for ways to adapt it to harvest even more types of energy. 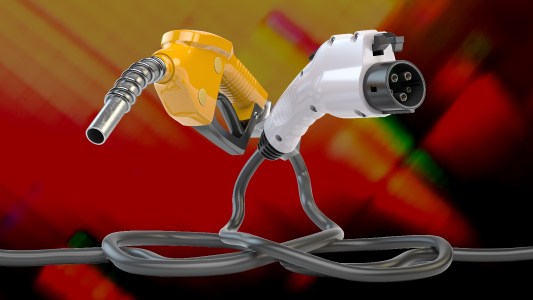 Electric vehicle sales are skyrocketing, but misinformation about the tech is still rampant. These are seven of the biggest myths about EVs.

Transportation
The biggest myths about electric vehicles
Subscribe to Freethink for more great stories
Subscription Center
Sections
Video
Freethink
Subscribe
We focus on solutions: the smartest people, the biggest ideas, and the most ground breaking technology shaping our future.
Subscribe