In 2013, the FDA banned 23andMe from telling customers about their genetic health risks. Now, after a five-year battle, 23andMe has finally won FDA approval to tell people if they have three mutations associated with a higher risk of breast cancer. It’s a landmark legal achievement that could help usher in a new age of personalized medicine.

The Backstory: Before the FDA ban, 23andMe could tell you what scientific studies had discovered about your genetic risk for over 125 health conditions and 30 different drug reactions. They cautioned that a genetic predisposition wasn’t a diagnosis of an actual disease, and, of course, everyone should talk to their doctor to confirm any positive test and discuss options. Even better, they helped people understand their results by rating the quality of the science: a genetic risk with multiple large studies behind it got four stars, and small preliminary research got one star

Whose DNA Is It, Anyway? The government put a stop to all that in 2013, arguing that people could not be trusted to handle information about their own DNA. Specifically, the FDA said that you might get a false positive, and women who heard they had a higher risk of breast cancer might rush out in a panic to get unnecessary chemotherapy or a mastectomy (as though any doctor would do surgery without double-checking the test, explaining the results, and discussing options). After the ban, 23andMe could only tell you gimmicky stuff, like how much caffeine you might like to drink and whether your big toe was longer than your second toe. It went from a sophisticated healthcare tool to one step above a Facebook quiz about which Game of Thrones character you are (Bran).

The Breakthrough: Almost five years later, the FDA approved the first direct-to-consumer test for genetic cancer risk, finally letting 23andMe tell its customers what it has always known about their health. The company” CEO tweeted her relief:

It joins seven other health risk tests the FDA has now authorized, including reports on some genes associated with Celiac, Parkinson”, and Alzheimer”.

1,001 Things You Still Can’t Know: Unfortunately, what 23andMe is allowed to share is still pretty limited. They can only tell you about three mutations on the BRCA gene that are associated with breast and ovarian cancers. These are almost exclusively found in Ashkenazi Jews, so the test is unlikely to tell most women anything about their risk. Over 1,000 other BRCA mutations have been linked to elevated cancer risk, and 23andMe still can’t tell you anything about them — or the 117 other health conditions they used to test for. But it’s a start, and perhaps the start of a revolution in healthcare and patients’ rights. 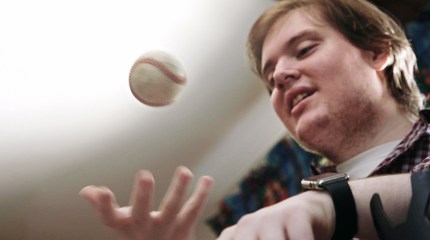 Could an injection of embryonic stem cells into the spinal cord reverse paralysis?