Our most prominent facial feature (literally) is the nose, and it’s also one of the most frequent sites of skin cancer. When said cancer requires surgical excision, the removal of nose cartilage can lead to disfigurement, which surgeons fix with more cartilage harvested from the patient — the ribs, for example.

But researchers at the University of Alberta have developed a new 3D bioprinting technique that can allow them to make custom nose cartilage from a patient’s own cells, with the aim of one day ending the need for invasive, rib-based reconstructive rhinoplasty.

“This is to the benefit of the patient. They can go on the operating table, have a small biopsy taken from their nose in about 30 minutes, and from there we can build different shapes of cartilage specifically for them,” Adetola Adesida, a professor of surgery and study co-lead, told Folio, the university’s internal news site.

“We can even bank the cells and use them later to build everything needed for the surgery. This is what this technology allows you to do.”

A bioprinting primer: Bioprinting, as my esteemed colleague Kristin Houser has reported before, is essentially a form of 3D printing.

“The difference is the kind of ink used — while most 3D printers work with plastics and other inorganic materials, 3D bioprinters use ‘bioinks’ of living cells,” Houser wrote.

These cells can then be used to create sundry sci-fi-sounding stuff: mass-produced mini-organs for drug development, ears, and bone — you can even print human tissue in space.

In the case of the Alberta team’s technique, published in The FASEB Journal, the medium in question is human nose cartilage cells. These cells were mixed with a hydrogel created from cow collagen, New Atlas reports.

Hydrogels are materials that can suck up and retain high amounts of water, which gives the cells something approaching biological tissue to grow in. Despite being about 92% water, the hydrogels have the mechanical properties and strength required for the nose cartilage to be printed, engineering professor Yaman Boluk told Folio.

That hydrogel nose cartilage matrix is then 3D printed into a specific shape determined by 3D imaging. After culturing in a lab for a few weeks, Folio explains, the end result is functional cartilage.

“It takes a lifetime to make cartilage in an individual, while this method takes about four weeks. So you still expect that there will be some degree of maturity that it has to go through, especially when implanted in the body,” Adesida said.

“But functionally it’s able to do the things that cartilage does.”

Saving face: The rib is a popular choice for harvesting because it has strong cartilage, and plenty of it. But while rib cartilage rhinoplasty works, it does have some disadvantages that would make 3D printed, bespoke nose cartilage a better option, the researchers say.

Rib cartilage, already formed into shape by the body, needs to be adjusted to fit the needs of the nose.

“When the surgeons restructure the nose, it is straight. But when it adapts to its new environment, it goes through a period of remodelling where it warps, almost like the curvature of the rib,” Adesida said. “Visually on the face, that’s a problem.”

Then there’s the process for getting the cartilage; your ribs are, of course, inside you, which means they gotta go in there and grab it.

“The other issue is that you’re opening the rib compartment, which protects the lungs, just to restructure the nose,” Adesida points out.

Their lab-grown nose cartilage, the researchers say, circumvents scarring and the risks of infection.

Next steps: Ensuring the 3D-printed nose cartilage retains its properties when transplanted into animal models is the next step, the researchers say.

From there, human clinical trials will have to be performed, which they hope to begin in the next two to three years. 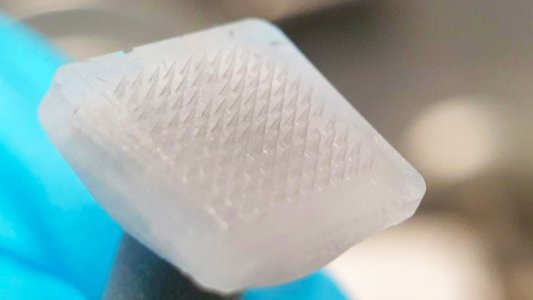 A new microneedle patch features needles made of ice instead of traditional materials, making it suitable for cell therapy delivery.