Time of death is considered when a person has gone into cardiac arrest, which is the cessation of the electrical impulse that drives the heartbeat. As a result, the heart locks up. This moment when the heart stops is considered the clearest indication that someone has died.

But what happens inside our mind during this process? Does death immediately overtake our subjective experience or does it slowly creep in?

Scientists have studied near-death experiences (NDEs) in an attempt to gain insights into how death overcomes the brain. What they’ve found is remarkable: A surge of electricity enters the brain moments before brain death. One 2013 study, which examined electrical signals inside the heads of rats, found that the rodents entered a hyper-alert state just before death.

Some scientists are beginning to think that NDEs are caused by reduced blood flow, coupled with abnormal electrical behavior inside the brain. So, the stereotypical tunnel of white light might derive from a surge in neural activity. Dr. Sam Parnia is the director of critical care and resuscitation research, at NYU Langone School of Medicine, in New York City. He and colleagues have investigated exactly how the brain dies.

In previous work, he’s conducted animal studies looking at the moments before and after death. He’s also investigated near death experiences. “Many times, those who have had such experiences talk about floating around the room and being aware of the medical team working on their body,” Dr. Parnia told Live Science. “They’ll describe watching doctors and nurses working and they’ll describe having awareness of full conversations, of visual things that were going on, that would otherwise not be known to them.”

Medical staff confirm this, he said. So, how could those who were technically dead be cognizant of what’s happening around them? Even after our breathing and heartbeat stop, we’re conscious for about 2–20 seconds, Dr. Parnia says. That’s how long the cerebral cortex is thought to last without oxygen. This is the thinking and decision-making part of the brain. It’s also responsible for deciphering the information gathered from our senses.

According to Dr. Parnia during this period, “You lose all your brain stem reflexes — your gag reflex, your pupil reflex, all that is gone.” Brain waves from the cerebral cortex soon become undetectable. Even so, it can take hours for our thinking organ to fully shut down.

Usually, when the heart stops beating, someone performs CPR (cardiopulmonary resuscitation). This will provide about 15% of the oxygen needed to perform normal brain function. “If you manage to restart the heart, which is what CPR attempts to do, you’ll gradually start to get the brain functioning again,” Dr. Parnia said. “The longer you’re doing CPR, those brain cell death pathways are still happening — they’re just happening at a slightly slower rate.”

Dr. Parnia’s latest, ongoing study looks at large numbers of Europeans and Americans who have experienced cardiac arrest and survived. “In the same way that a group of researchers might be studying the qualitative nature of the human experience of ‘love,’” he said, “we’re trying to understand the exact features that people experience when they go through death, because we understand that this is going to reflect the universal experience we’re all going to have when we die.”

One of the objectives is to observe how the brain acts and reacts during cardiac arrest, through the process of death, and during revival. How much oxygen exactly does it take to reboot the brain? How is the brain affected after revival? Learning where the lines are drawn might improve resuscitation techniques, which could save countless lives per year.

“At the same time, we also study the human mind and consciousness in the context of death,” Dr. Parnia said, “to understand whether consciousness becomes annihilated or whether it continues after you’ve died for some period of time — and how that relates to what’s happening inside the brain in real time.” 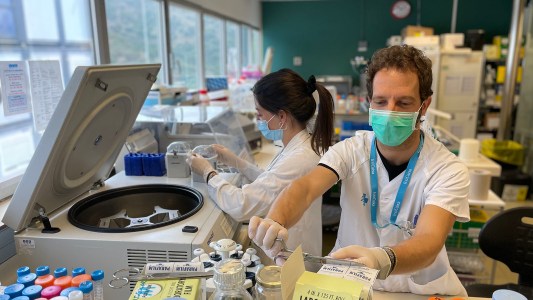 A common HIV drug could potentially be a Down syndrome treatment, improving cognition in mouse models of the condition.

Medicine
An old HIV drug may treat Down syndrome
Subscribe to Freethink for more great stories
Subscription Center
Challenges
Video
Freethink
Subscribe
We focus on solutions: the smartest people, the biggest ideas, and the most ground breaking technology shaping our future.
Subscribe