ALS is progressive — the longer a person has it, the worse it gets. In the disease’s final stages, patients lose their ability to move or speak, and most will die within just five years of developing symptoms.

To date, the U.S. Food and Drug Administration (FDA) has approved just two treatments for ALS.

Now, a third ALS treatment has shown promise in a Phase 2 clinical trial — and experts are petitioning the agency to skip the next trial phase and make the drug available to patients as soon as possible.

The new ALS treatment is a combination of two drugs: a supplement (taurursodiol) and a medication used to treat a pediatric urea disorder (sodium phenylbutyrate).

The drugs each target a different cell structure, and in 2013, Joshua Cohen, co-founder of Amylyx Pharmaceuticals, came up with the idea to combine the two to treat brain disorders.

To see whether the drug combo might help ALS patients, Amylyx teamed up with researchers at Massachusetts General Hospital for a Phase 2 trial, publishing its results in the New England Journal of Medicine on September 3.

The researchers gave two-thirds of the 137 trial participants daily doses of the new ALS treatment, and the other third a placebo.

They then used the ALS Functional Rating Scale — a questionnaire focused on patients’ abilities to do common daily activities, such as walking and swallowing food — to evaluate the participants’ ALS progression over the course of the six-month study.

A score of 48 on that scale indicates totally normal motor function, and as a person’s physical abilities deteriorate, their score drops. Over the course of the trial, the scores of the patients who received the placebo lowered about 2 points more than those who received the new ALS treatment.

“That can mean the difference between being able to feed yourself versus being fed or not needing a wheelchair versus needing a wheelchair,” Neil Thakur, chief mission officer of the ALS Association, a nonprofit that helped pay for the study, told the New York Times.

With a typical survival time of between 2 to 5 years, people with ALS cannot wait.


ALS Association and I Am ALS

In other areas of measurement (such as muscle strength and respiratory ability), the new treatment appeared to provide benefits to the participants although these results were not statistically significant.

Most of the participants in the study were already taking at least one of the drugs already approved for ALS. Still, researchers believe the new ALS treatment provided additional benefits and that the new treatment could be taken alongside existing medications.

“The data that we see here indicates there may be some beneficial effect but it doesn’t look like what you’d call a home run,” Dr. Koroshetz, director of the National Institute of Neurological Disorders and Stroke, who was not involved in the study told the New York Times.

Some patients that received the treatment experienced nausea, diarrhea, and other gastrointestinal side effects for about three weeks, but overall, the drug was safe, the researchers reported.

Normally, the next step in the development of any new ALS treatment would be a larger Phase 3 trial, which would take several more years.

But the ALS Association and I Am ALS, a nonprofit ALS patient-advocacy group, have launched a petition asking the FDA to skip that phase and make the new treatment available to patients as soon as possible.

There’s some precedent to this: certain cancer drugs have been approved in mid-stage trials for patients in critical need of treatment. 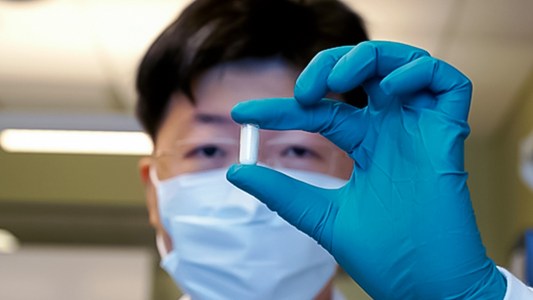 A synthetic intestinal lining could make it easier for doctors to control drug delivery and nutrient absorption in patients.