But the trial isn’t just about a particular drug — it’s also a proof of concept for the driving force behind it: biomarker-based psychiatric care.

Using what they call their “Precision Psychiatry Platform,” Alto previously identified various objective, testable markers that they believed would predict who would respond to their drug. One such biomarker profile, which the company thought would be indicative of ALTO-100 efficacy, was analyzed in the study.

Alto Neuroscience have announced positive results for a phase 2 trial of a new drug for major depressive disorder, ALTO-100.

“The strength of these results demonstrates, for the first time, that we can prospectively identify likely responders to our novel drugs and apply data-driven measurement to the treatment of psychiatric and other central nervous system disorders,” Alto founder and CEO Amit Etkin said in a statement.

Feelings to numbers: A biomarker is a measurable signal in the body that can be used to diagnose, track, and assess treatment of a disease. It could be something tested in the blood (like blood sugar or cholesterol), something in a biopsy (such as a particular genetic mutation in a tumor), or something measured externally (like heart rate or blood pressure).

Mental health disorders, for the most part, do not have well-defined biomarkers. It is difficult to point at a brain scan and determine, say, that a patient has schizophrenia but not autism, or both, or neither. One cannot do a blood draw to distinguish borderline personality disorder from bipolar disorder.

As it stands, mental health disorders are primarily diagnosed via rigorously assembled lists of categorized symptoms, most notably the Diagnostic and Statistical Manual of Mental Disorders, or DSM. Currently on its fifth iteration, the DSM is good but inadequate — it does not contain objective, empirical ways to diagnose mental health disorders.

Nor are there tests that can tell doctors if a patient with a particular psychological symptom, like anxiety or depression, will respond to a particular drug for that. Many patients simply have to go through a battery of drugs to find one that helps.

“The way we do diagnosis today is really pretty limited,” Tom Insel, a former director of the National Institute of Mental Health and a current scientific advisor for Alto, told me in 2018 while reporting on the hunt for psychiatric biomarkers. “It’s a little bit like trying to diagnose heart disease without using any of the modern instruments, like an EKG, cardiac scans, blood lipids, and everything else.”

Researchers are trying to discover those biomarkers that are necessary for better mental health care.

But currently, drugs are developed — and administered — in something of a dark room.

“The way we develop drugs, the way we deploy drugs in the clinic, all presume nothing about the patient,” Etkin told Business Insider.

This data is combined with what Alto calls “core domains of mental function”: cognition, emotion, and sleep processes. By using the platform’s data and these buckets, they believe they can accurately predict drug response, creating better psychiatric medications.

The company’s pipeline currently has a number of drugs specifically aimed at various biomarker subgroups they have identified, GEN reported.

Biomarkers are measurable signals in the body that can be used to assess disease. Using a data-driven platform, Alto believes it has found biomarker profiles for better psychiatric drug development.

“There’s a co-evolution of the way we define people with biomarkers and the interventions we are developing,” Etkin told GEN. “We’re just beginning precision approaches for the brain, taking a page out of oncology, which has been doing this forever.”

ALTO-100: For their phase 2 study, highlights of which were presented at the J.P. Morgan Healthcare Conference, Alto recruited 228 patients with major depressive disorder (MDD) or PTSD to receive ALTO-100.

The drug works through a “growth-factor” in the brain called brain-derived neurotrophic factor to enhance neuroplasticity, although its binding target remains unknown.

Of those patients, 59 of them had an MDD biomarker profile that Alto identified as predicting drug efficacy.

MDD severity was measured using the Montgomery–Åsberg Depression Rating Scale (MADRS) — the idea was to compare the MADRS results for the biomarker group versus those without them.

Cautious optimism around the results is appropriate, Rebecca Strawbridge, a postdoc researcher at King’s College London, told Business Insider, as the study was small and had no placebo group as a baseline to compare the novel drug against.

That being said, the study did “show encouraging findings for advancing towards a more-personalized treatment approach for depression, in that people who had been flagged as more likely to respond did respond better to the intervention,” Strawbridge said. 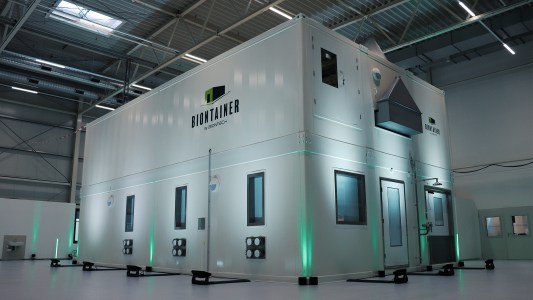 Coronavirus
New mRNA vaccine factory is made from shipping containers
By Kristin Houser
Subscribe to Freethink for more great stories
Subscription Center
Sections
Video
Freethink
Subscribe
We focus on solutions: the smartest people, the biggest ideas, and the most ground breaking technology shaping our future.
Subscribe