Fresh on the heels of a new FDA drug approval for Alzheimer’s, fraught with both hope and controversy, researchers at the University of Cincinnati and Sweden’s Karolinska Institute have proposed an alternative to the dominant theory of what causes Alzheimer’s disease.

The new drug, aducanumab, was the first approved Alzheimer’s treatment in nearly two decades, and it is supposed to work by clearing clumps of a protein called amyloid-beta — Alzheimer’s calling card. The drug did not clearly improve patients’ cognitive decline, but it did reduce those amyloid plaques.

The theory behind the FDA’s approval — and vast swaths of Alzheimer’s research — is that those amyloid plaques are behind the disease. Alter them, alter the disease — theoretically.

“It’s not the plaques that are causing impaired cognition, ” Espay, a professor of neuroscience at UC, said in a release. “Amyloid plaques are a consequence, not a cause” of Alzheimer’s disease.

The amyloid plaque problem: “The amyloid cascade hypothesis has been the prevailing paradigm for understanding Alzheimer’s disease (AD) pathogenesis,” the authors wrote in their study, published in The Lancet’s EClinicalMedicine.

“It’s not the plaques that are causing impaired cognition. Amyloid plaques are a consequence, not a cause.”

Here’s the thing about the amyloid plaque theory, however: drugs that can clear the plaques — like aducanumab — have thus far had no impact on the disease itself.

Further complicating the picture? The presence of amyloid plaques “does not invariably predict dementia,” as the authors note in their study. According to the researchers, by the age of 85, around 60% of people will have amyloid plaques in the brain; only 10% will develop dementia.

When it isn’t aggregated into plaques, the amyloid protein maintains its unique structure and goes about its business in the brain. Once they glom together, the researchers say, the proteins lose their proper shape and, with it, their functional abilities.

The researchers theorized that it is actually the loss of these soluble amyloid proteins in the brain that may be the cause of Alzheimer’s disease, and its associated cognitive decline — not the amyloid plaques per se, which may be more gravestone than murder weapon.

Looking for good amyloid: To see if they might be right, researchers analyzed the brain scans and spinal fluid from 598 patients with plaques enrolled in the Alzheimer’s Disease Neuroimaging Initiative.

They found that people with higher levels of soluble amyloid protein were cognitively normal — regardless of how much plaque was present. The free-floating protein was also associated with larger hippocampuses, the region of the brain tied to memory.

“The key discovery from our analysis is that Alzheimer’s disease symptoms seem dependent on the depletion of the normal protein, which is in a soluble state, instead of when it aggregates into plaques,” Kariem Ezzat, a researcher at the Karolinska Institute and study co-author, said.

The team is now continuing to test their hypothesis in animal models.

If the work continues to bear out, it could cause a paradigm shift in treating Alzheimer’s disease, one which moves away from eliminating plaques and instead seeks to replenish amyloid, in its non-clumped-together form.

Brain
New brain cancer treatment trialed in children for the first time
MRI-guided focused ultrasound has been used to deliver chemo into the brain of a pediatric cancer patient for the first time.
By Kristin Houser
Up Next 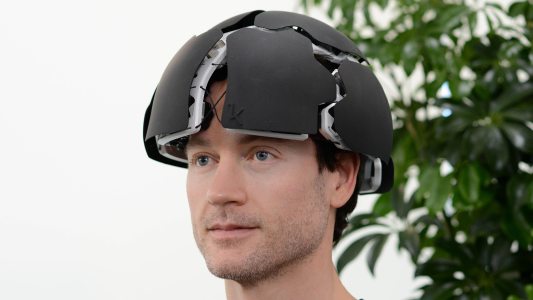 Neuroscience
These mind-reading helmets could be a Fitbit for your brain
By Kristin Houser
Subscribe to Freethink for more great stories
Subscription Center
Sections
Video
Freethink
Subscribe
We focus on solutions: the smartest people, the biggest ideas, and the most ground breaking technology shaping our future.
Subscribe