In 2010, college student Ian Burkhart suffered a spinal cord injury (SCI) that left him unable to move most of his body.

Four years later, he had a brain implant inserted as part of NeuroLife, an experimental research program designed to help him regain some of the motor function he’d lost due to the injury.

By the time Freethink caught up with Burkhart in 2017, he was once again able to move his fingers — and today, he has the ability to feel with them, too.

The NeuroLife system, which was developed by researchers from Battelle Memorial Institute and the Ohio State University Wexner Medical Center, consists of three parts.

First is the brain implant, which picks up the brain signals produced when Burkhart thinks about making a certain motion with his hands.

From there, it transmits the data to a computer via a cable. This computer decodes the brain signals and recodes them as commands to the third component: a series of bands that stimulate the muscles in Burkhart’s forearm, prompting the intended hand movement.

By 2017, Burkhart was able to use his hand to swipe a credit card — and even play the video game Guitar Hero.

But he still wasn’t actually able to feel anything with it — he only knew he was holding something if he was looking at it and concentrating on maintaining his grip.

That started to change when the NeuroLife researchers realized with some surprise that Burkhart’s brain implant could pick up on faint signals when he touched an object.

“When the chip was placed on the surface of Ian’s motor cortex in 2014, it was not known that the signals related to object touch could be observed because of the paralysis,” researcher Patrick Ganzer said in a press release.

“Furthermore, Ian has a very severe SCI that should essentially block hand touch signals from even reaching the brain,” he added.

Once the team knew that the brain implant could pick up on sensory signals, though, they set to work figuring out how to translate those signals into something Burkhart could detect — and according to the paper they published in the journal Cell, they succeeded.

A “Definitely Strange” Sense of Touch

Now, the computer hooked up to Burkhart’s brain implant doesn’t just send recoded motion signals to his forearm device —  it also relays touch signals to a band wrapped around his bicep, where he still has sensation.

Those signals cause the band to vibrate, with the intensity of the vibration reflecting the strength of Burkhart’s grip on an object.

“It’s definitely strange,” he told Wired. “It’s still not normal, but it’s definitely much better than not having any sensory information going back to my body.”

The NeuroLife team believes this is the first example of a single brain-computer interface restoring both motion and a sense of touch in a person with paralysis.

They’re now working to find a way to make the system usable outside of the lab so that others can benefit from it.

“My goal is to get this into the hands of other people with paralysis and see how far we can push the technology,” Burkhart told Wired. “The biggest thing that’s motivated me is this hope for the future.” 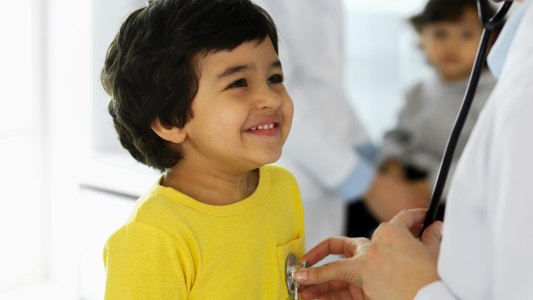 A new, prototype artificial heart valve can adjust to a child’s growing body, potentially sparing them from multiple open-heart surgeries before adulthood.

Surgery
This adjustable heart valve would grow as a child ages
Subscribe to Freethink for more great stories
Subscription Center
Sections
Video
Freethink
Subscribe
We focus on solutions: the smartest people, the biggest ideas, and the most ground breaking technology shaping our future.
Subscribe