Scientists have been trying to find ways to predict an epileptic seizure for decades, with little success. They are almost always unpredictable. The best techniques we have now — machine learning and self-awareness — give us only minutes notice ahead of the seizure.

Now, for the first time, a study has shown that brain activity could be used to forecast the onset of epileptic seizures several days in advance.

A team of researchers looked into data from brain implants designed to monitor and prevent seizures. Buried in the data, they found patterns of brain activity that predicted seizure risk a day or more in advance. The researchers say this could be used to create an epileptic seizure forecasting tool — giving new hope to patients with epilepsy.

“For 40 years, efforts to predict seizures have focused on developing early warning systems, which at best could give patients warnings just a few seconds or minutes in advance of a seizure,” said UC San Francisco neurologist Vikram Rao, a coauthor of the study published in The Lancet Neurology.

“This is the first time anyone has been able to forecast seizures reliably several days in advance, which could really allow people to start planning their lives around when they’re at high or low risk.”

The team used data collected from NeuroPace, a responsive brain stimulation implant. It was approved in 2013 for clinical purposes like preventing seizures by detecting abnormal brain activity and delivering an electrical pulse.

Epilepsy is a common neurological disorder marked by periodic seizures or episodes of abnormal electrical activity in the brain. When a person has an epileptic seizure, they can experience loss of consciousness or convulsions.

Predicting seizures would be a life-changing innovation for people with epilepsy. Currently, with the possibility of an episode at any given moment, people need to live their life with a degree of caution that may include avoiding risky activities like cooking or swimming.

Studying brain patterns in epileptic patients is challenging. Most of the data is collected in a hospital or research setting for short periods. However, the NeuroPace offers a new window into a patient’s brain activity.

The device is implanted into the brain to read brain activity and help stop seizures. Because it is continuously listening to the brain’s activity, it allows researchers to look at years of continuous EEG data — collected while people go about their everyday lives — to see brain activity patterns that correspond with seizures. This type of data collection is undreamt of in this field of research.

The team looked at data from 18 patients. All of them had a brain implant, and the researchers could track it for several years. This data allowed them to create a model that could predict an epileptic seizure. They then tested the algorithm on similar data collected over a decade-long clinical trial that included 157 people.

It turns out, the timing of seizures isn’t as arbitrary as they seem. The team found monthly brain cycles that predict an increased likelihood of having a seizure, and they believe they could someday use this to help people anticipate an episode and plan their day accordingly. This knowledge could also inform medication timing so that dosage can be matched to the risk of a seizure.

Predicting seizures would be a life-changing innovation for people with epilepsy.

“Our findings in this study give me hope that I may someday be able to tell (a patient) that, based on her brain activity, she has a 90 percent chance of a seizure tomorrow, so she should consider avoiding triggers like alcohol and refrain from high-risk activities like driving,” said Rao.

The NeuroPace was initially designed to detect and stop an imminent epileptic seizure. The team says that using it for long-term prediction is still in the early stages, and they need more research before it is ready for clinical use.

“Truly determining the utility of these forecasts, and which patients will benefit most, will require a prospective trial, which is the next step,” said Rao. 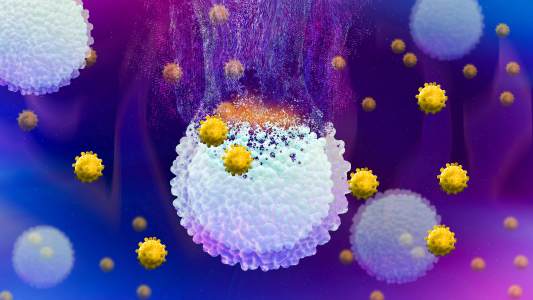 Engineered immune cells can fight off rogue T cells which damage the pancreas and cause type 1 diabetes.