The syringe was “very full, very large,” and it would make sitting down uncomfortable for a while.

“Kit” had gone to the health center in Chicago for a full panel of STI tests — it had been a minute, after all, and regular screenings are an important part of safe, multi-partner relationships.

During the test, they were told the health center would be double-checking for gonorrhea — “there’s a new antibiotic-resistant strain” about, Kit explains.

Kit tested positive for the bacteria.

Fearing the chance it was the superbug version — one resistant to antibiotics — the staff shot Kit up with a double dose of antibiotics (in that very full, very large syringe) and left them with a stern warning to avoid all sexual activity, lest they potentially infect someone else.

The health center staff’s concerns are well founded, and shared by researchers attempting to find new weapons in our constant microbial arms race.

And they’ve found potential in a popular panacea that many people claim can do just about anything: cannabidiol (CBD). But unlike most CBD remedies on the market, CBD and antibiotics actually has some science behind it.

Rise of the Superbugs

It seems cruelly naive now, but there was a time when the war on infectious disease was thought to be all but won; the invisible enemy, cause of so many chiseled headstones, had been cowed.

It hasn’t turned out that way.

Instead of eliminating infections forever, the widespread use of antibiotics — and, crucially, their overzealous misuse — applied evolutionary pressure, as bacteria that survived their long battle developed resistance to the drugs.

When this antimicrobial resistance (AMR) prevents common antibiotics from killing or halting bacterial infection, severe disease and death can result.

And so were born the bacterial “superbugs”. These bacteria resist our most common medicines against them and are a primary threat to global health. Perhaps most famous among them is Methicillin-resistant Staphylococcus aureus — MRSA.

This drug-resistant staph can cause a spectrum of issues, from skin and blood infections to sepsis and even death. Though especially lethal in hospital and nursing home settings, its most high-profile victims are athletes.

Drug-resistant bacteria and fungi have been opportunistically flourishing as the COVID-19 pandemic stuffs hospitals and devours attention, time, and PPE — raising the stakes even further for a crisis decades in the making.

To make matters worse, little appears to be coming down the pike, with few candidates out there.

“There are no really big blockbuster drugs which are currently in development which I know (of),” says Prabhavathi Fernandes, chair of the Global Antibiotic Research & Development Partnership. Fernandes speaks with an infectious enthusiasm and the easy authority that comes when one has six approved antibiotics to their name. “Not even in phase 1. It’s very, very early.”

And they may have found one in cannabis.

Researchers have known about the antibiotic effects of cannabis since the 1950s, but a lack of understanding of its component parts — called cannabinoids — meant that the effect couldn’t be isolated to any one compound.

According to a review in the journal Antibiotics, THC and CBD were shown to kill bacteria in 1976; further research added CBG, another cannabis extract, to the list.

THC, of course, is psychoactive (i.e., it gets you stoned). But CBD and CBG (which also has antimicrobial properties, as demonstrated by Eric Brown’s lab at McMaster University) have no psychoactive effect. With cannabis research flourishing, there has been renewed interest in using these compounds in the war on superbugs, both on their own and in combinations of CBG/CBD and antibiotics.

“All of them have staph activity and MRSA activity,” Fernandes says of cannabinoids. Combine that with their long record of use in humans and you’ve got an attractive drug candidate.

At Australia’s University of Queensland, a group headed by Mark Blaskovich, director of the IMB Centre for Superbug Solutions, is working with Botanix Pharmaceuticals to suss out CBD’s potential as a standalone antibiotic.

Halfway around the world, at the University of Southern Denmark, Janne Kudsk Klitgaard is studying the effects of combining CBD and antibiotics, in an attempt to make our current weapons more effective — and less likely to lead to drug resistance.

Just how CBD (and other cannabinoids, like CBG) kills bacteria has yet to be pinned down, but evidence across multiple labs suggests that it somehow impacts the bacteria’s protective membrane.

CBD’s activity against superbugs resistant to numerous classes of antibiotics suggests that it is honing in on different targets, a key ability for any new antibiotic. Blaskovich’s lab also found CBD effective at breaking up biofilms, slimy build-ups from bacteria that protect bugs like MRSA — a difficult challenge even for conventional antibiotics.

Similarly promising is Blaskovich’s recent discovery that CBD is effective at killing a handful of gram-negative bacteria — including Neisseria gonorrhoeae, the pathogen that causes gonorrhea and leads to extra-large needles.

Dyeing the bacteria quickly identifies their cellular membranes. Gram-negatives, unlike their optimistic cousins, have an extra outer membrane, as well as pumps that remove unwanted proteins — two things that can flummox antibiotics, soaps, and the immune system.

In short, they’re trickier to kill.

But in their expanded panel of gram-negative bugs, four were killed — and a pretty nasty four, at that. The casualties included bacteria that cause gonorrhea, brain-inflaming meningitis, bronchitis and pneumonia, and Legionnaires’ disease.

“It was very interesting and intriguing,” Blaskovich says of the work. “Why were they killing this type of bacteria? But also very exciting.”

CBD and Antibiotics in Combination

Klitgaard’s work in Denmark is taking a slightly different approach, studying CBD and antibiotics acting in concert. By combining CBD with the antibiotic bacitracin, they found the combination was more effective at killing staph than the antibiotic working alone.

“We can add lower concentrations of both compounds” when fighting an infection, Klitgaard says.

CBD seemed to help the bacitracin by working something like a battering ram: by disrupting staph‘s membrane, bacitracin can more effectively reach the bacteria. (Or, as Klitgaard colorfully puts it, the CBD shoots the bacteria in the leg, and the bacitracin finished the job.)

That means that the potential side effects of both CBD and antibiotics would be less severe, as well as reducing the likelihood of antimicrobial resistance. Using the least amount of a compound necessary to clear an infection cuts down the risk of excess exposure, which could force bacteria into escape evolutions.

Bacterial resistance and the nature of CBD itself pose major challenges that will need to be solved if the cannabinoids, however promising, are to succeed in the failure-prone world of antibiotic discovery.

By making cultures of MRSA, exposing them to CBD and antibiotics, taking those that survive to start a new culture, and repeating the process again and again, Klitgaard’s lab found that MRSA was able to develop resistance to CBD, bacitracin, and both in combination.

This purposeful breeding is important: by finding out what changed to allow the bacteria to survive, you can work backwards and figure out how they are mutating to evade the drugs, and (hopefully) forestall them. It’s like playing chess against an AI where you’re allowed to see its next move.

Meanwhile, in Australia, Blaskovich believes that CBD has a low potential for resistance development, due to its anti-membrane killing style. Like the Danish study, Blaskovich’s lab exposed bacteria to continuously increasing concentrations of CBD — but with quite different results.

“Against several different strains of staph aureus, it was essentially flat,” Blaskovich said. “We saw no increase, or very marginal increase, in the level of resistance over those twenty days.”

This is a promising result. But according to Fernandes, all drugs will meet with resistance eventually. Evolution never stops working.

There are other issues to be overcome, too:  CBD itself is not the easiest drug to work with. CBD is a fat-loving compound, and it gets gobbled up quickly by fatty tissues in the body and by the liver. It’s also protein-bound, which means it easily gets gummed up in the blood and rendered largely ineffective.

This makes CBD not the ideal candidate for systemic infections, as it may not reach where you need it to go, but Botanix, which is working with Blaskovich, is testing CBD for use as a topical antibiotic.

Perhaps more concerning is that the same membrane activity that makes CBD such a potent bactericide also makes it potentially damaging to human cells. In vitro experiments with human cells showed that CBD tended to go after bacteria, but there’s only so much that you can learn from test tubes.

Even still, we can’t take anything off the table when it comes to superbugs; in a war running low on ammunition but with no shortage of enemies, CBD and antibiotics in combination, or the cannabinoid on its own, may yet prove an effective arrow in the quiver.

But one way or another, antimicrobial resistance will continue apace; there is no lid for Pandora’s box.

“There’s not going to be a rapid solution (to superbugs) like coming up with a vaccine,” Blaskovich says. “Because the length of time needed to develop new therapies, we need to be doing a lot now, to stop a real crisis in 10 years’ time.”

“What If Nothing Works?”

After the syringe had gone and the soreness subsided, the spectre of super-gon necessitated multiple rounds of testing for Kit.

When the online results of their follow-up indicated the bacteria was still present — in big red letters, like a failing grade or the scarlet strokes of an editor, as Kit puts it — an unsettling feeling set in.

“The question is, do I keep trying things?” Kit said. “What if nothing works? Do I just have this forever?”

In that moment, Kit faced the uncertain prospect of a future when antibiotics have failed. Eventually, slowly, the drugs cleared the infection. This time.

The question for the world is, what will do the job in 2031?

Public Health
A vaccine against mosquito saliva may be the key to stopping their diseases
University of Leeds researchers have identified a compound in mosquito saliva as a potential target to protect against multiple viruses.

Medicine
A smart bomber for bacteria could help save antibiotics
Brown University researchers have developed a “smart” drug delivery system that only releases its payload when bacteria are present.
Up Next 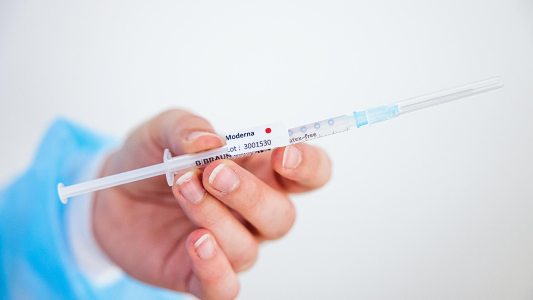 In the U.S., anyone over the age of 16 is now eligible for COVID-19 vaccines — a major milestone along the path to herd immunity.

Public Health
All adults in the US are now eligible for COVID-19 vaccines
Subscribe to Freethink for more great stories
Subscription Center
Challenges
Video
Freethink
Subscribe
We focus on solutions: the smartest people, the biggest ideas, and the most ground breaking technology shaping our future.
Subscribe