New research suggests that our body’s coronavirus immune response may be quite unusual compared to how we respond to other viruses — and this could tell us both why the disease is so deadly and how to treat it.

The study, published in Cell, found that an imbalanced immune response to SARS-CoV-2 — the never-before-seen coronavirus that causes COVID-19 — could help explain some of the disease’s pathology and provide insight into treatments.

To vastly oversimplify things, the immune system has two basic ways to fight off a virus: by defending each cell that is attacked by the virus, within that cell, and by defending the rest of the body from cells that get infected. When a cell is invaded by a virus, it also fires off distress flares, triggering immune cells to come and destroy the captured cell before it can spawn more viruses (the “nuke it from orbit” approach).

Essentially, SARS-CoV-2 shuts down the individual immune defenses of the cells it infects, while allowing the cell’s distress flares to not only fire continually, attracting immune system cells, but may even exacerbate the distress signal.

Most viruses have the ability to lessen both of these defenses, to some extent. For the coronavirus to be so heavily titled one way is what’s odd.

A Call to Arms and a Call for Reinforcements

To understand the study’s results, you first need a quick crash course in the immune system.

The immune system is infinitely more complicated than just “white blood cells eat invaders” and “antibodies target pathogens.” And not only is it complicated, it’s devastating: the body’s ability to destroy that within it is awe inspiring. This ability can go into overdrive, however, and when that happens, we can be hoisted by our own petard.

“The immune system is an incredibly powerful thing,” says Benjamin R. tenOever, a professor of microbiology at the Ichan School of Medicine at Mount Sinai and an author on the study. “Every symptom you feel from a virus infection is your body reacting to the virus.”

Got it? Good, because now we’ve gotta break it down further. When a virus invades a cell, it fights back with two strategies: an internal call to arms and an external call for reinforcements.

One, the cell isn’t a sitting duck. It attacks the intruder itself with proteins called interferons; think of this like the cell’s own immune system. The interferons fight the virus within the cell.

Two, the cell will release chemicals called chemokines. Chemokines are essentially cellular distress signals. When these are released, the sundry white blood cells of the innate immune system come running, ready for action.

“What’s really unusual about SARS-CoV-2 is that you have a very strong call for reinforcements, alongside a very weak call to arms,” tenOever says.

SARS-CoV-2 is incredible at shutting down the cell’s internal immune response.

The results were found in general cell lines and human respiratory cells in a lab, and in ferret models (the ferret is an excellent respiratory disease model for humans), and confirmed by analyzing the blood serum and lung tissue of confirmed COVID-19 patients.

“One thing that is also striking is that they’ve shown this in multiple models,” says Angela Rasmussen, an associate research scientist at Columbia University’s Center for Infection and Immunity, who was not involved with the study.

Viruses generally have an ability to tamp down both elements of a cell’s infection response. This allows them a chance to hijack the cell and make copies of themselves, as well as get those copies out into circulation before the reinforcements arrive. But the novel coronavirus immune response is different.

SARS-CoV-2 is incredible at shutting down the cell’s internal immune response. When it breaks into a cell, it replicates like wild, replacing a huge amount of the cell’s genetic material with its own.

By the time the invasion has finished, an average of 55% of the RNA inside the cell belongs to the virus (and sometimes up to 80%, according to unpublished data referenced by tenOever). Compared to the 5% or so the flu virus usually achieves, which is considered a lot by viral standards, it’s clear that the novel coronavirus is a freak.

If the cell is a computer, then the virus has completely taken over the operating system.

“That is insane,” tenOever says, something he has never seen in his career. “Viruses don’t ever have the capacity to just take on so much of the written software.” It’s like if the hard drive got wiped and the virus almost completely took over.

Once invaded, an average of 55% of the RNA inside the cell belongs to SARS-CoV-2, compared to the 5% or so the flu virus usually achieves.

“That is a very strange observation,” tenOever says. “But it’s almost worse than that. It’s almost like it holds back interferon while promoting the other response.”

As the cell continues to pump out calls for help, the cells of the innate immune system arrive to take on the virus. But when they get there, they find cells already bursting with SARS-CoV-2; tenOever describes something like a battle scene, with pieces of cells and viruses and other immune system cells clumped into a debris field.

Eventually, this immune system trainwreck begins to harm the body. Inflammation and the coronavirus immune response pileup can lead to pneumonia and the killing of cells needed to exchange air in the lungs.

Viruses don’t ever have the capacity to just take on so much of the written software.

The paper is careful to note this unusual coronavirus immune response has not been proven to explain why COVID-19 is more lethal in older people, but it stands to reason that younger, healthier immune systems — with more robust internal cellular defenses — may be why the disease is milder in younger populations.

“It’s kind of hard based on the data here to say this is happening in every single patient,” Rasmussen says. Scientists simply don’t have enough data on host response in patients to start making those conclusions.

“But it does suggest a mechanism.”

What It May Mean

Prior to this paper, we basically knew nothing about the host response to SARS-CoV-2, Rasmussen says. “Whether it be prognostic assays or treatments, I think this is really important for that.”

If a test can determine what cellular distress signals are in a SARS-CoV-2 patient’s blood, you may be able to predict early if they are going to have a severe form of the disease.

The unhealthy buildup of chemokines, immune system cells, and the various proteins the cells are communicating with is known as a cytokine storm, and can be potentially fatal.

What the study suggests is that two approaches for treatment may help mitigate COVID-19.

“Either you minimize the chemokine activation, or you increase interferon activation,” tenOever says. “Either of those would likely reduce your duration and severity of disease,” with one important caveat: “As long as you caught it before there was respiratory distress.”

If you’ve hit that point, the paper suggests, an interferon intervention could do more harm than good. Interferon is what causes flu-like symptoms, tenOever says, and if you already have respiratory distress, it could cause new complications.

At that point, the best bet may be to try to curb the chemokine response and other inflammation-causing proteins released by the immune system cells. This is what sets the cytokine storm in motion.

“If you short circuit that by blocking communication, that might be very therapeutic,” tenOever says. “It’s the one thing we have directly mentioned in the paper.” 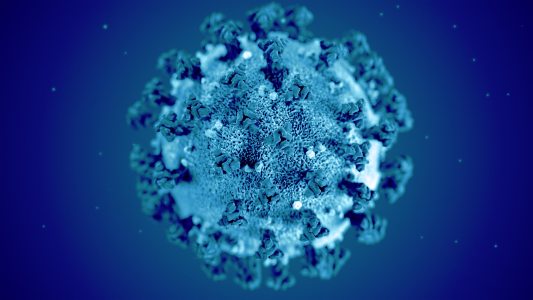