New research has revealed an unusual problem caused by the novel coronavirus, SARS-CoV-2: the virus is very, very good at breaking into our cells and replicating inside them — but very, very bad at stopping the cells from calling in reinforcements from the immune system.

Normally, these reinforcements are a good thing: they kill off infected cells, create antibodies, put nearby cells on alert, and stop the virus from spreading.

Unfortunately, in some patients, the rush to help can kick up what is known as a cytokine storm. Essentially, the reinforcements go overboard and start inflicting collateral damage on healthy cells.

The immune cells spray out too many “cytokines” — molecules that cause inflammation — damaging the lungs, causing pneumonia, and, in the worst cases, respiratory failure. The body responds to the damage with yet more reinforcements, and the situation spirals out of control.

The ensuing cytokine storm can cause organ damage and even death, and it appears to be one of the primary ways that COVID-19 kills us.

It’s not entirely clear why most people are able to short circuit this spiraling overreaction, while others are overwhelmed by it. Fortunately, there may be drugs that can calm the storm when our immune system can’t help itself.

Promising new research out of the U.K. suggests that dexamethasone, a commonly available steroid that treats inflammation — like the kind caused by an out of control immune response — may help reduce COVID-19 fatalities in patients with severe cases.

That study has not yet been published or peer-reviewed, but several other medications are also being studied to try to stop or mitigate the cytokine storm, according to reports in the New York Times.

In addition to dexamethasone, here are four other drugs that have the potential to calm the storm and save lives.

One of the most promising studies, published in Science Immunology, found that the cancer drug acalabrutinib cuts off cytokines at their source, in the immune reinforcements themselves.

“Acalabrutinib is going for the trunk of the tree,” Louis Staudt, the lead author on the paper, told the Times, while other drugs are equivalent to trimming branches.

The study was small and lacked a control group, the Times noted, but the results were promising.

Out of eleven patients treated with the drug who needed supplemental oxygen, eight regained breathing ability and returned home. Out of eight treated patients on ventilators, two recovered during the study, and two were able to come off their machines, while two remained on ventilators, and two others died. Those two had been sick for a long period of time, the researchers said.

All of the patients who responded well showed reductions in a signaling protein called IL-6, which causes inflammation — and, in some cases, potentially signals a cytokine storm.

The drug manufacturer AstraZeneca will be conducting larger trials of the drug soon.

Manufactured by Swiss pharmaceutical giant Roche, tocilizumab is an immunosuppressant used in the treatment of rheumatoid arthritis, among other arthritises.

According to the American College of Rheumatology, the drug treats arthritis by inhibiting the inflammatory IL-6 protein, the same protein that in COVID-19 patients may lead to a cytokine storm.

Per the Times, the drug is in multiple clinical trials, including one in which it is paired with the famed Gilead antiviral remdesivir.

The experts quoted in the Times suggested that stopping inflammatory signals before they even begin to be produced may be our best bet. Blood pressure medications like prazosin halt the chemical signals that come before the cytokines.

Writing in the Journal of Clinical Investigation, researchers found that preventing the synthesis of hormones called “catecholamines” — which exacerbate inflammation — significantly increased the survival of mice inflicted with inflammatory stimuli.

Prazosin showed a similar effect on the hormones, making the drug a promising candidate to prevent a cytokine storm. A clinical trial at Johns Hopkins is looking to find out.

Keck Medicine of USC is beginning a clinical trial of baricitinib, an anti-inflammatory also used to treat rheumatoid arthritis, according to a press release from the university.

Baricitinib lowers the levels of cytokines, including usual suspect IL-6.

“Our premise is that by using baricitinib to reduce the inflammation, we may be able to slow down the progress of the disease, stop the need for a ventilator and save lives,” Michael Dube, interim chief of infectious disease at the Keck School of Medicine, said in the statement. 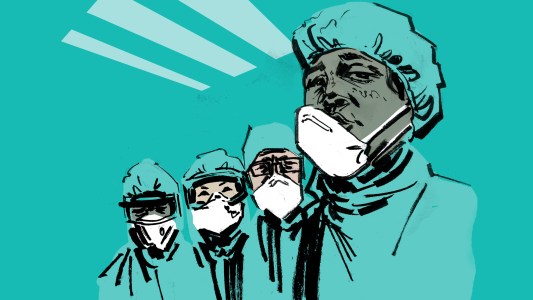 Scientists are beginning to come to a consensus on coronavirus transmission.

Coronavirus
How does the coronavirus spread? Expert consensus builds
By B. David Zarley
Subscribe to Freethink for more great stories
Subscription Center
Sections
Video
Freethink
Subscribe
We focus on solutions: the smartest people, the biggest ideas, and the most ground breaking technology shaping our future.
Subscribe