Efforts to improve the collection of death records and other public health data in Africa has discovered a surprising pattern in malaria deaths.

In Sierra Leone, the Countrywide Mortality Surveillance for Action (COMSA) is sending surveyors door-to-door to collect death records via “electronic verbal autopsies” — the recollections of relatives and friends — to tally fatalities that happen outside of the country’s health system, the New York Times’ Stephanie Nolen reported.

Workers ask basic questions — married? name? age? religion? — before asking if anyone in the household has died within the last two years. If so, a string of follow up questions help to determine the circumstances of their death, like if they were sick, saw a doctor, took medication, and the symptoms they suffered.

Efforts to improve the collection of death records and other public health data in Africa has discovered a pattern in malaria deaths different from the current understanding.

In Sierra Leone, that information is entered into a laptop and sent to COMSA Sierra Leone’s main office in Njala University, where doctors review the verbal autopsies and assign probable causes of death — data that is crucial to understanding public health.

COMSA’s first sweep revealed information so surprising that co-principal investigator Rashid Ansumana could not — would not — believe it until they were rigorously and repeatedly checked and verified.

“I got convinced with facts and evidence,” Ansumana told Nolen. “And now I can convince anyone: The data is awesome.”

In that trove of data was a revelation about malaria that seemed to run counter to generally accepted knowledge.

Malaria is a disease caused by parasites delivered via mosquito bite. The WHO estimates that in 2020 there were 241 million cases of malaria globally, with 627,000 fatalities. It is a massive disease burden mostly borne by children.

Public health experts and doctors in Sierra Leone thought no different; in medical school, Ansumana was taught that malaria kills young children, but those who survive were unlikely to die from later infections, he told Nolen.

Instead, the data revealed something very different: malaria was the leading killer of adults in Sierra Leone.

When laid out in death reports data, malaria’s killing profile looked like a U: there was the high child mortality that is well known, but also a rise in mortality after age 45. The current WHO models had vastly underestimated malaria deaths, the COMSA researchers wrote in the Lancet.

Because health data in sub-Saharan Africa can be lacking, estimating the impact of diseases like malaria — despite our long history of fighting them — “have swung between semi-informed guesses and wild speculation.”

The first signs of U-shaped malaria curves were found in India during the Million Death Study in 2010, which examined data from 2003. The results “raised concern about relying on estimates based on selective data, or few data at all,” Jha and colleagues wrote in The American Journal of Tropical Medicine and Hygiene in 2020.

Evidence like the U curve found in Sierra Leone backs the idea, although the possibility they come from misidentified deaths remains, the paper states. Getting more, and better, information is the key to finding out.

Life, death, and data: Such insights — and perhaps many more — are hidden from public health experts’ view due to incomplete and inaccurate health data collection.

“Health professionals and governments use data in deciding how to address the needs of communities,” the CDC notes.

Birth records help us know where to direct resources, death records where programs may best save lives. But without accurate data, “it is difficult to know what solutions could help communities.”

Deficiencies in death records in low-income countries have multiple root causes. Some of them are logistical and mundane: A family cannot afford the time or money to get to a registry officer far away; they may be unaware such processes even exist; many deaths are handled domestically, with people buried behind homes or in village plots. Death records may be tallied by their town but never collated into national government data.

Such insights — and perhaps many more — are hidden from public health experts’ view due to incomplete and inaccurate health data collection.

Other problems may lie with the government systems in place — assuming they want to keep the records at all, which is not a given.

“There is no incentive in death registration,” Centre for Global Health Research head Prabhat Jha told Nolen. Jha has previously led efforts in India, which also has no comprehensive national death data, and sees success in Sierra Leone as a sign that this model may work across nations.

Multiple nations have begun improving their death record collecting, including Mozambique, which has its own COMSA program, and Zambia now collects 34% of death records, up from 5%.

Proper death records may thus reveal both surprises and solutions.

“When you count the dead, you just get information that you didn’t expect,” Jha told Nolen.We’d love to hear from you! If you have a comment about this article or if you have a tip for a future Freethink story, please email us at [email protected] 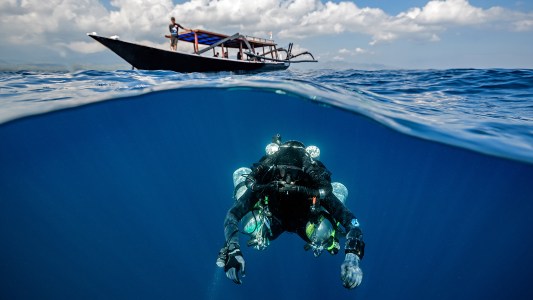 Duke researchers have developed an early warning system for rebreather divers at risk of hypoxia.

Medicine
Rebreather dives are wildly risky. But this might save lives.
By B. David Zarley
Subscribe to Freethink for more great stories
Subscription Center
Sections
Video
Freethink
Subscribe
We focus on solutions: the smartest people, the biggest ideas, and the most ground breaking technology shaping our future.
Subscribe