Every day, before I leave the house, I have to check three things:

I’m not the only one obsessing over whether I left the stove on or off. Many people who look critically at their habits will likely find a few nagging compulsions. A 2010 study that surveyed 2073 U.S. adults found that more than 25% experienced obsessions or compulsions in their life. Research suggests that these intrusive thoughts are common across the world.

But for some, these habits can grow until they interfere with daily life. Obsessive-compulsive disorder (OCD) is characterized by repetitive, unreasonable thoughts and fears that lead to compulsive behaviors like excessive cleaning, checking, and rechecking.

2.2 million U.S. adults are affected by this, but few therapies are effective. The most effective treatment for OCD is cognitive-behavioral therapy. Other less effective or proven options include medication or transcranial magnetic stimulation (TMS), which uses magnetic fields to stimulate the brain.

A New Non-Invasive Treatment for OCD

Researchers at Boston University suggest that stimulating the brain with electricity could be a new treatment for OCD. In a study in Nature Medicine, they describe a drug-free therapy that uses electrical stimulation to reduce compulsive behavior — without placing electrodes into the skull.

“The results (of the study) suggest it may be possible to noninvasively and electrically impede brain activity and behaviors that are undesirable to help people who are ‘stuck’ in a particular mode of functioning as is the case with obsessions and compulsions,” Robert Reinhart of Boston University’s Psychological & Brain Sciences said.

Reinhart’s team developed a procedure for selectively manipulating beta-gamma rhythms in the orbitofrontal cortex (OFC). The idea is that this brain region may play a role in learning and the pursuit of repetitive behaviors that the brain finds rewarding. Interfering with brain patterns in this region might reduce negative obsessive-compulsive behaviors, reports Scientific American.

To test the potential treatment for OCD, the team recruited 60 volunteers who had exhibited compulsive behavior to receive noninvasive brain stimulation, known as transcranial alternating current stimulation (tACS), for 30 minutes a day for five days.

After the brain stimulation, the researchers assessed the volunteer’s behavior and found that the personalized stimulation had interfered with the process that leads to repetitive behavior. The volunteers that received the stimulation reduced their compulsive behavior immediately, and the results lasted for at least three months. In the end, they were more likely to try something new rather than repeat the same behavior over and over.

Carolyn Rodriguez, a psychiatrist and neuroscientist at Stanford University, was not involved in the study but suggests that the results be taken with a grain of salt because the participants didn’t have a formal diagnosis of OCD.

“The neurobiology of people who are nonclinical but have these kinds of behaviors may be different than individuals who are diagnosed with OCD,” Rodriguez told Scientific American. “These findings are an interesting start, (but) we need to understand how it’s relevant to people who have OCD.”

My routine checks before I leave the house are pretty harmless. They rarely make me late for an appointment. But for those diagnosed with OCD, compulsive behaviors like excessive cleaning can interfere with their lives. This study, if it holds up in clinical patients, could be one step toward a drug-free, personalized, noninvasive, and long-lasting treatment for OCD. 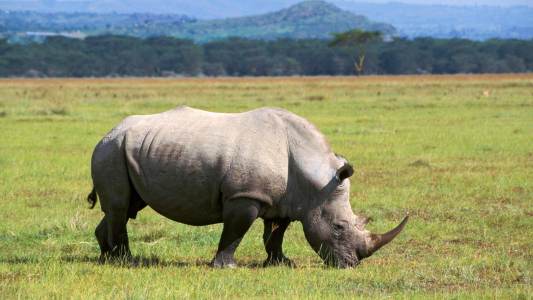 The northern white rhino species is down to just two members, both female. Can science bring it back from the brink of extinction?

Animals
Can science save the northern white rhino?
Subscribe to Freethink for more great stories
Subscription Center
Challenges
Video
Freethink
Subscribe
We focus on solutions: the smartest people, the biggest ideas, and the most ground breaking technology shaping our future.
Subscribe