By studying donated brains, muscles, and other tissues stored in a pet dog biobank, researchers have uncovered a genetic link between brain aging in both canines and humans — and the discovery could lead to new interventions for dementia.

A dog’s life: Dogs are a potentially valuable model for human aging because they’re susceptible to many of the same age-related diseases as us, including dementia, which doesn’t appear to affect many animal species.

Environment and lifestyle plays a role in human aging, too, and because we simply like to have dogs around us, they’re also exposed to many of those same factors.

The challenge: Studying aging in dogs may uncover new targets for human aging research, but doing this in a lab setting is challenging.

“Medical research often relies on laboratory dogs, but keeping them to study natural aging would be time-consuming, expensive, and ethically debatable,” geneticist Sára Sándor said in a press release.

The background: In 1994, researchers at Hungary’s Eötvös Loránd University founded the Family Dog Project to study the relationship between humans and dogs.

A spin-off of that project — the Senior Family Dog Project — launched in 2016 to focus on how the brains of pet dogs age.

The hope was that insights from the project would not only help support healthy cognitive aging in dogs, but also help us understand the biology behind human aging.

A pet dog biobank: They’ve learned a lot about dog aging through genome research and behavioral studies, but one of the best ways to study the brain is to actually study the brain.

The group decided to establish a pet dog biobank, where donated tissue and brain samples could be stored after the animals passed away.

We were relieved and very grateful that many owners said yes.

“Linking behavior, pet-keeping conditions, and molecular data would result in a unique biobank,” researcher Eniko Kubinyi said. “We were relieved and very grateful that many owners said yes.”

The study: The pet dog biobank, which now houses 130 donated brains and other tissue samples, is already paying off for aging research.

A new study, published in Frontiers in Veterinary Science, measured the expression of a gene called CDKN2A in deceased dogs’ brains, skeletal muscles, and skin tissues, as well as in the blood of living dogs.

The expression of this gene is suspected of being a biomarker of human aging. As we age, the level of it in several tissues tends to increase, and they’re particularly high in the brains of people with dementia.

The results: The researchers discovered that the levels in older dogs’ brains, muscle tissue, and blood were higher than in younger dogs, with the brain showing the most significant correlation between age and expression — which is also true of people.

The upshot: The study included samples from just 41 dogs, and the researchers couldn’t test tissue samples and blood from the same dogs because all of the animals in the pet dog biobank had been put to sleep with drugs, which would interfere with the blood tests.

Still, now that we know the expression of CDKN2A appears to be similar in aging dogs and humans, researchers may be able to use the knowledge to test interventions in dogs (who age faster than people) that could one day help combat brain aging and dementia in humans.

Brain
Brain experiment suggests that consciousness relies on quantum entanglement
Researchers possibly witnessed entanglement in the brain, indicating that some brain activity, like consciousness, operates on a quantum level.
By Elizabeth Fernandez
Up Next 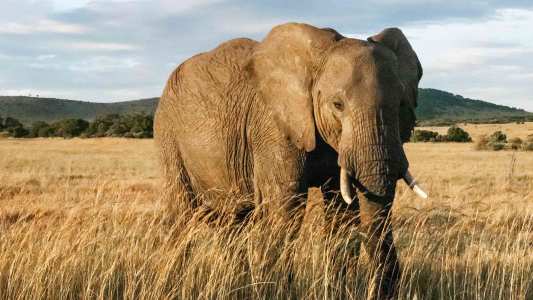 Elephant poaching is running wild in Africa. But, with the help of a smartphone app, Kenya is reviving the population.

Animals
This app is saving elephants from poachers
By Teresa Carey
Subscribe to Freethink for more great stories
Subscription Center
Sections
Video
Freethink
Subscribe
We focus on solutions: the smartest people, the biggest ideas, and the most ground breaking technology shaping our future.
Subscribe